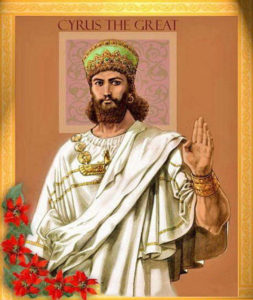 The people described in most detail by Herodotus are in fact not the Greeks, but their enemies the Persians, a fellow Aryan people. Herodotus speaks a great deal about Persian culture, often very positively. (For instance: “the Persians are normally the last people in the world, to my knowledge, to treat men who fight bravely with disrespect” [7.238]). The historian is far more critical of individual arrogant Persian rulers, such as Cambyses and Xerxes, than he is of Persia as such.

Herodotus claims that the Persian Empire—which in his day stretched from Greek Asia Minor in the west to India in the east, and from Egypt in the south to the edges of Scythia in the north—had grown through “customs” of monarchic power and conquest. These led every Persian king to expand the empire, at least until this led to unnatural excess and to their downfall.

Persian culture, as described by Herodotus, is in many respects highly adaptive. He says that among the Persians:

After bravery in battle, manliness is proved above all by producing plenty of sons, and every year the king rewards the person producing the most; they think that quantity constitutes strength. . . . they study only three things: horsemanship, archery, and honesty. (1.136)

Thus the Persians put a supreme value on martial valor, reproduction, and trust.[1] The Persians, like other conquering Aryan peoples such as the Greeks and Scythians, looked down on manual labor while glorifying warriors.

The Persian Empire itself is presented as a kind of ethnocracy. In Persia, before the rise of Cyrus, the rulers were the Medes—an ethnic group perhaps related to the modern-day Kurds—who greatly feared being ruled the Persians and who were regarded by them as a foreign ethnic group. The Median king’s advisers clearly express both their fear of being ruled by another group and the idea of sharing in the king’s rule by virtue of being members of the same people:

My lord, it’s true that the prosperity of your rule is very important to us as well, because the alternative is for power to fall into foreign hands. If it devolves on to this boy [Cyrus], who is Persian, we Medes will be enslaved by the Persians and will become worthless outcasts. But you are one of us. As long as you are king, then, power is partly ours too, and we have important standing in society thanks to you. We are bound to do all we can to look out for you and your rule. (1. 120)

When Cyrus took power from the Medes, he is indeed supposed to have granted special privileges to Persians, protected their interests, exempted them from taxes, and given them command of the multiethnic Persian army (3.75, 3.97, 7.96).

The Persians culturally reinforced their own group solidarity through various practices. The overthrowing of the Medes was the most important day in the Persian calendar (3.79) and the Persians feared a return of Median power. The Persians trained themselves to think of themselves as a solidary racial/ethnic group through prayer. A Persian, Herodotus says, “is not allowed to exclude others and pray for benefits for himself alone; he prays for the prosperity of the king and the whole Persian race, since he is, after all, a member of the Persian race himself” (1.132). Conversely, one of the signs of the madness of Cambyses was his abuses against his own people. An adviser warned him: “you are killing your own countrymen. . . . If you go on behaving like this, you had better watch out or the Persians will rise up against you” (3.36).

The Persians, like the Greeks and Romans, did not however make a religion of racial purity. There was no indiscriminate mixing of ethnic groups in their empire—the army for instance was divided into units along national lines—but the Persian elite allowed for some intermarriage with members of other groups, particularly among elites making marriage alliances with elites from other ethnic groups (Herodotus cites cases of half-Greeks and half-Medes in the Persian elite).

The Banality of Race War

One of Herodotus’ characters laments the tragedy of war: “no one is stupid enough to prefer war to peace; in peace sons bury their fathers and in war fathers bury their sons” (1.87). Yet, war is inevitable, whether willed by the gods, the clash of cultures, scarce resources, the arrogance of men, or simply old hatreds for past atrocities.

A nation is only free to pursue its existence and determine its own destiny if it can defend itself militarily. In the ancient world, defeat frequently meant enslavement or extermination. Indeed, as so often, ethnic cleansing was a grim but logical consequence of ethnic solidarity: wars between states were actually wars between peoples. Physical liquidation of the enemy population meant eliminating a potential source of rebellion, securing their land and other resources for oneself, and sending a message to other would-be rebellious subjects.

The Persians could be quite tolerant rulers but did not hesitate to be outright genocidal towards those who resisted their power. Cyrus directly comments on this topic to his adviser Croesus, the former king of Lydia, a country he had conquered. The Lydians were causing trouble because they were still attached to their former king who was “more than a father to the Lydians” (1.155). Cyrus wondered whether he should simply enslave all the Lydians, since the Lydians were filled with hatred toward their conquerors. “I’ve behaved like someone who has killed the father but spared the children” (1.155).[2]

Herodotus records numerous instances of ethnic cleansing committed by the Persians and other peoples. This was commonly done either at the conclusion of military conquests or to punish rebellions. After being conquered by the Persians, the important Greek island-city of Samos was depopulated: “The Persians ‘trawled’ Samos and handed over to Syloson [a Greek collaborator] an uninhabited island.” (3.149). On one occasion the Persians seemed to wish to inflict the worst possible biological damage on the defeated Ionians: “they picked the best-looking boys and castrated them, cutting off their testicles and turning them into eunuchs; they also took the most attractive girls and sent them to the king as slaves” (6.32)—a stark reminder of the evolutionary consequences of ancient warfare. The inhabitants of the Greek city of Barca on the Libyan coast were enslaved and deported to Bactria in Central Asia (4.204). During the Persian invasion of Europe, several entire Thracian tribes (living north of Greece) were “uprooted from their native land and taken to Asia” (5.15). Following the failure of the Ionian Revolt, the Persians destroyed the important Greek city of Miletus:

Most of the male population was killed by the Persians . . . their women and children were reduced to slavery, and the shrine at Didyma—both the temple and the oracle— was plundered and burned. . . . Those Milesians who remained alive were [relocated] on the Red sea . . . So Miletus was left empty of Milesians. (6.19–22)

During the invasion of mainland Greece, the city of Eretria was punished for siding with the Athenians by deporting them en masse to central Persia (6.119). The Persians were by no means alone in resorting to ethnic cleansing. Following an atrocious ethnic conflict with the native Pelasgians of Lemnos, the Athenians expelled the island’s inhabitants (4.137-40).

Entire peoples could decide to move themselves in order to escape being conquered. Half of the population of Phocaea, an Ionian city, fled rather than submit to Persian rule (1.164). There was also a proposal for all Asiatic Ionians to emigrate to Sardinia rather than submit to Persia. The Scythians for their part were able to avoid and defeat their enemies through superior mass-mobility. Herodotus says:

Although in other respects I do not find the Scythians particularly admirable, they have come up with the cleverest solution I know of to the single most important matter in human life . . . how to prevent anyone who attacks them from escaping, and how to avoid being caught unless they want to be detected. (4.46)

Given the omnipresent threat of annihilation at the hands of foreign nations, no wonder Herodotus calls the ability to escape from or catch one’s enemies “the most important matter in human life.”

The Persians are not the only people described as having a martial culture. The Scythians are said to have customs and a way of life worthy of Conan the Barbarian: human sacrifice, worship of the war-god Ares, drinking the blood of one’s first kill, keeping the heads of one’s kills to confirm them and be rewarded on that basis, making coats from scalps, using the tops of skulls as cups . . . In an annual ceremony, all Scythian men who have killed enemies may drink, while the others are gravely shamed (4.66). Many of Herodotus’ verifiable observations about the Scythians—such as their burial of their chieftains in mounds with their horses—have been subsequently confirmed by archaeology.

[2]Similarly, among the Scythians: “The children of people executed by the king are not safe either: he has every male child killed, although he leaves the females alone” (4.69).