We apologize for the inconvenience PayPal’s bad behavior has caused you and many more. We’re finally back in operation – a long journey.

We want you to re-subscribe with our new processor! [Those that got notice they had been cancelled.] Please visit the site and sign up again here (so you don’t miss an issue):

We are really hoping that people will re-subscribe to support us now that the system has tagged us for censorship. We appreciate every dollar and CMS is committed to continuing — as long as you are.

For all you people who haven’t read The Occidental Quarterly before – sign up for the best of even what you read here on TOO!
Subscriptions start at just $30 per year for the PDF digital download version. Then! upgrade to the print. You’ll love it.

Thank you for your continued support.

The Occidental Quarterly provides scholarly articles on Western history and culture. Articles are written from a variety of perspectives, including intellectual history, evolutionary biology, behavior genetics, and ethnic studies. The Winter 2017 issue (Vol. 17, no. 4) contains 136 pages of content.

In the Fall issue, Brenton Sanderson reviewed Roger Scruton’s book which attempts to defend Richard Wagner against academic Jewish activists who have attempted, with some success, to denigrate Wagner’s musical genius because of his attitudes on Jews. This is a continuing theme. In this Winter issue, Dr. Andrew Joyce, who has written previous articles on similar attempts to destroy the reputations of T.S. Eliot and Ezra Pound, discusses the attempt to erase the legacy of a lesser-known figure, poet Robinson Jeffers. Jeffers was originally attacked because he, like other patriots such as Charles Lindbergh, was opposed to U.S. entry into World War II.

Dr. Ricardo Duchesne’s article on Johann Christian Herder has a similar purpose—pushing back against academic activists who have attempted to portray Herder as a proponent of multiculturalism. These activists seek to find support for the current dispossession of Europeans among the intellectual giants of the European past.

Perhaps the greatest disaster of the post-World War II era is that the left has abandoned the White working class in favor of massive non-White immigration and multiculturalism. Here Dr. Brian Thorn reviews the opposition to Asian immigration from working-class Canadians in the nineteenth century. As in the U.S., the Canadian labor movement strongly opposed immigration, with much of their rhetoric opposed to the capitalists who profited from cheap labor, but often shading into what today would be labeled “racism.” The parallels to the contemporary world are obvious.

Guillaume Durocher continues his series of articles on the ancient Greeks. In this issue, he reviews how Herodotus viewed culture and nationhood, concluding that he viewed an adaptive society in a manner quite the opposite of the modern liberal worldview. Herodotus emphasized the importance of familial and ethnic kinship, creating a strong sense of being an ingroup, promoting reproduction, and emphasizing manly virtues of military prowess.

Dr. Joyce also has an extended review of Benjamin Ginsberg’s How the Jews Defeated Hitler. Ginsberg’s book illustrates the intensity of Jewish activism in a broad range of areas, from guerilla operations against the German army, to a major role in the officer corps of the Soviet army, code breaking, Hollywood propaganda, and influence on financial policy in the Roosevelt administration. He concludes that it is a serious mistake to underestimate the ability of Jews to influence events important to them.

There are three shorter reviews: 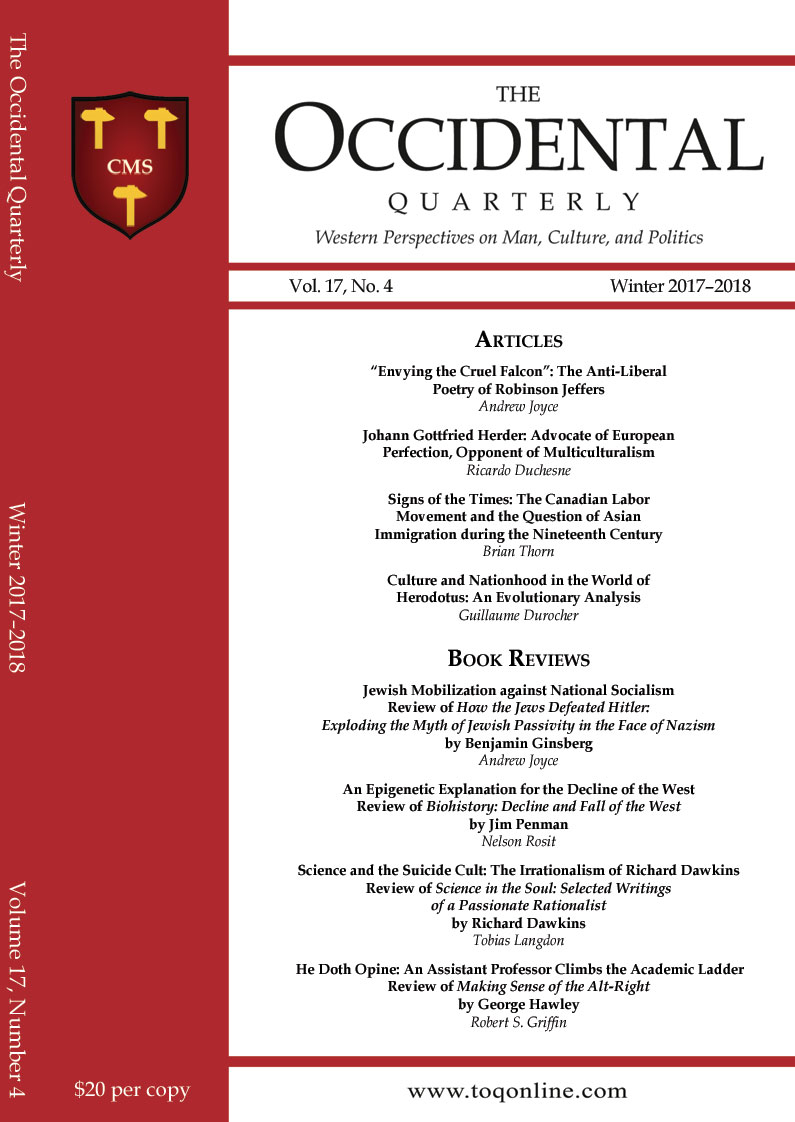