Concluding Thoughts on the Puritan Intellectual Tradition in America

An interesting feature of Puritanism is the tendency to pursue utopian causes framed as moral issues—their susceptibility to utopian appeals to a ‘higher law’ and the belief that the principal purpose of government is moral. New England was the most fertile ground for “the perfectability of man creed,” and the “father of a dozen ‘isms.’”[1] There was a tendency to paint political alternatives as starkly contrasting moral imperatives, with one side portrayed as evil incarnate—inspired by the devil. Puritan moral intensity can also be seen in their “profound personal piety”[2]—their intensity of commitment to live not only a holy life, but also a sober and industrious life.

Whereas in the Puritan settlements of Massachusetts the moral fervor was directed at keeping fellow Puritans in line, in the nineteenth century it was directed at the entire country. The moral fervor that had inspired Puritan preachers and magistrates to rigidly enforce laws on fornication, adultery, sleeping in church, or criticizing preachers was universalized and aimed at correcting the perceived ills of capitalism and slavery.

Puritans waged holy war on behalf of moral righteousness even against their own cousins. Whatever the political and economic complexities that led to the Civil War, it was the Yankee moral condemnation of slavery that inspired and justified the massive carnage of closely related Anglo-Americans on behalf of slaves from Africa. Militarily, the war with the Confederacy was the greatest sacrifice in lives and property ever made by Americans.[3] Puritan moral fervor and punitiveness are also evident in the call of the Congregationalist minister at Henry Ward Beecher’s Old Plymouth Church in New York during World War II for “exterminating the German people . . . the sterilization of 10,000,000 German soldiers and the segregation of the woman.”[4]

With the rise of the Jewish intellectual and political movements described in The Culture of Critique, the descendants of the Puritans (and, of course man other Whites) readily joined the chorus of moral condemnation of America.

The propaganda from the leftist educational system has been very effective. https://t.co/6UtSFl7ySx

The lesson here is that in large part the problem confronting Whites in the contemporary United States stems from the psychology of moralistic self-punishment exemplified at the extreme by the Puritans and their intellectual descendants, but also apparent in a great many other whites. Once Europeans were convinced that their own people were morally bankrupt, any and all means of punishment should be used against their own people. Rather than see other Europeans as part of an encompassing ethnic and tribal community, fellow Europeans came to be seen as morally blameworthy and the appropriate target of altruistic punishment.

The best strategy for destroying Europeans therefore is to convince the Europeans of their own moral bankruptcy. A major theme of [The Culture of Critique] is that this is exactly what Jewish intellectual movements have done. They have presented Judaism as morally superior to European civilization and European civilization as morally bankrupt and the proper target of punishment.

As a thought experiment, imagine trying to make Arabs feel guilty about the slave trade and about the Arab expansion throughout the Middle East, North Africa, and into southeastern Europe. Try to imagine making the descendants of the Bantu in Africa feel guilty about their expansion into southern Africa, or the Han Chinese expansion at the expense of other peoples. Mohammed is venerated by all Muslims, and there’s a statue to Genghis Khan in Ulaan Bataar, Mongolia. This is a European problem—particularly northwest Europe. 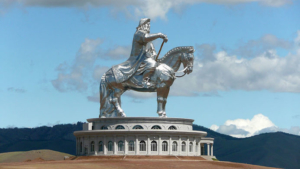 The Puritan legacy in American culture is indeed pernicious because, once the Puritan-descended intellectual elite had been eradicated, their moral idealism was vulnerable to intellectual and political movements that eventually aimed at replacing the traditional peoples of the United States. The intellectual and political left (which is a product of the post-1965 counter-cultural revolution) have been fundamentally based on a moral critique of traditional American society that aims to eradicate the power of its European-derived traditional majority and relegate them to a relatively powerless demographic minority. At this time, any group identification of Whites has been pathologized—a legacy most of all of the Frankfurt School which has become a linchpin of the intellectual basis for the new elite.[5]

As someone with considerable experience in the academic world, I can attest to feeling like a wayward heretic back in seventeenth-century Massachusetts when confronted, as I have often been, by academic thought police. It’s the moral fervor of these people that stands out. The academic world has become a Puritan congregation of stifling thought control, enforced by moralistic condemnations that a seventeenth-century Puritan minister could scarcely surpass. In my experience, this thought control is far worse in the Ivy League universities founded by the Puritans than elsewhere in academia—a fitting reminder of the continuing influence of Puritanism in American life.

Given this state of affairs, what sorts of therapy might one suggest? To an evolutionary psychologist, this moralistic aggression seems obviously adaptive for maintaining the boundaries and policing the behavior of a close-knit group. The psychology of moralistic aggression against deviating Jews (often termed “self-hating Jews”) has doubtless served Jews quite well over the centuries. Similarly, groups of Puritans in Massachusetts and descendants doubtless benefited greatly from moralistic aggression because of its effectiveness in enforcing group norms and punishing cheaters and defectors, thereby creating effective groups.

A proper Darwinian sense of moralistic aggression would be directed at those of all ethnic backgrounds who have engineered or are maintaining the cultural controls that are presently dispossessing whites of their historic homelands. The moral basis of this proposal is quite clear:

(1) There are genetic differences between peoples, thus different peoples have legitimate conflicts of interest. [6]

(2) Ethnocentrism has deep psychological roots that cause us to feel greater attraction and trust for those who are genetically similar.[7]

(3) As Frank Salter notes , ethnically homogeneous societies bound by ties of kinship and culture are more likely to be open to redistributive policies such as social welfare.[8]

(5) Ethnic homogeneity may well be a precondition of political systems characterized by democracy and rule of law.[10]

The problem with the Transcendentalists and the other nineteenth-century idealists and moral perfectionists is that they came along before their intuitions could be examined in the cold light of modern evolutionary science. Lacking any firm foundation in science, they embraced a moral universalism that is ultimately ruinous to people like themselves, particularly since—unlike the late nineteenth and early twentieth centuries when intellectuals like Madison Grant were able to right the ship—they no longer hold the intellectual and moral high ground.

And because the voluntary loss of demographic and cultural hegemony being experienced by the European-derived population is so contrary to human evolved predispositions, their moral universalism needs constant buttressing with all the power of the state—much as the rigorous rules of the Puritans of old required constant surveillance by the authorities. Indeed, as the universalistic, anti-White left assumes greater and greater control, we see censorship of heterodox thought in the universities and the proliferation of police-state measures to ensure conformity of thought and deed—highly reminiscent of Puritan Massachusetts. In the UK, where the Puritans originated, people are being arrested for Facebook and Twitter posts critical of migration and multiculturalism.

First, intellectuals can change. The optimism and liberal social activism that guided these nineteenth-century intellectuals turned to a perspective influenced by the realpolitik implications of Darwin—that Whites were in a struggle for racial survival and that controlling immigration was critical to their future prospects.

Third: Even though the forces of immigration restriction won the day in 1924, in a very real sense it was too little, too late. The Marxist-inspired radicals of the day became the parents of the red diaper babies of the 1940s and became the backbone of the left that was triumphant in the 1960s as discussed in my book, The Culture of Critique. This fundamentally Jewish group became an integral component of the intellectual, media, and political establishment of the US and were instrumental in the immigration act of 1965 which opened up immigration to all the peoples of the world. Immediately after this bill was enacted, the activists pushed for greater numbers to the point that we now have well over 1,000,000 per year. This has transformed the political landscape, with the Democrats being the party of non-Whites. Rather than the class-based politics I grew up with, we now have race-based politics, with ever increasing percentages of Whites voting Republican. Indeed, everything has become racialized. We are subjected to endless messages promoting White guilt for the past and the sufferings of non-Whites who nevertheless continue to do whatever they can to get here. And there are the ever-increasing attempts to remove basic freedoms like freedom of speech and gun rights. The UK is already a police state of the left. We are heading in that direction, perhaps only a couple elections away. Political attitudes are more polarized now than at any time since the Civil War.

In 1924 Americans restricted immigration to conform to the ethnic status quo of 1890. What they really needed to do was to deport the newcomers in droves. We are in the same situation now. Even if non-White immigration were to stop tomorrow, the changes wrought by past immigration would continue apace. Whites would become a minority within our lifetimes—and I’m an old guy. One wonders if American Whites have the political courage to do what needs to be done—or at least carve out an ethnostate in part of the US. There is a Chinese curse that goes “May you live in interesting times.” That certainly applies to us.

[10] Jerry Z. Muller, “Us and Them: The Enduring Power of Ethnic Nationalism,” Foreign Affairs, March/April 2008.