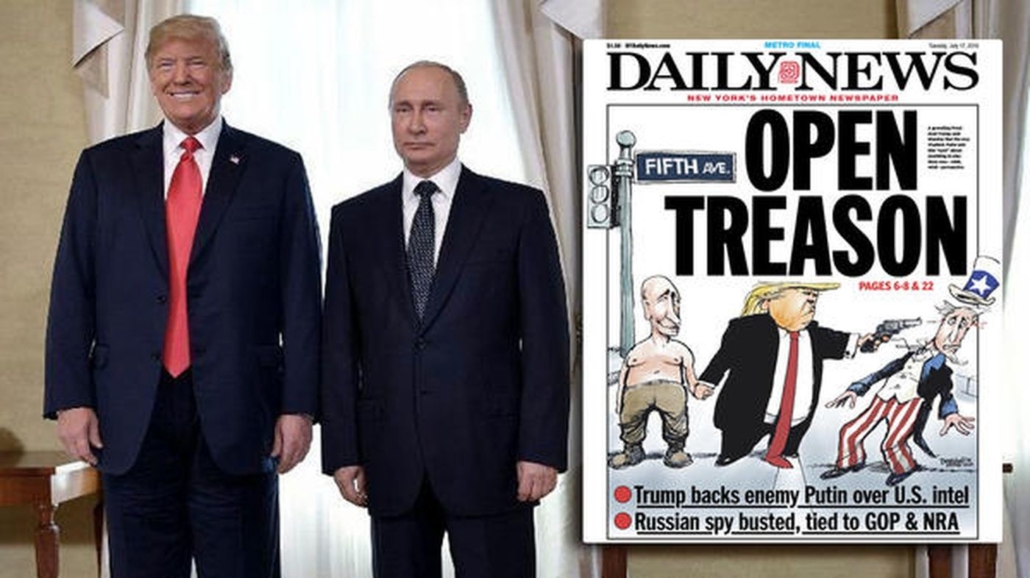 The Trump-Putin summit in Helsinki has resulted in the greatest outpouring of TrumpHate to date. Truly stunning. The #NeverTrumpers (basically neocons) now joined at the hip with the liberal/left have finally found the issue they think they can win on. Sure, the image of children being taken from their parents was effective with the people who already hated Trump. But this may not be a winning formula—certainly not Trump’s base—when 70% of voters rank immigration as “very important” for their vote. But the idea of “Trump the traitor” may well have legs.

Democrats and NeverTrump neocons are smelling blood in the water. They can pretend that they are patriotic nationalists (despite all the open borders “abolish ICE” comments from top Democrat politicians and neocon horror over Trump’s America First foreign policy (neocons have a very different idea of what country should come first, and predictably, they shed crocodile tears about Trump on separating illegal families (along with the ADL) without saying a word about Israel’s draconian immigration policies or gratuitous murder of Gazan children).

“Televised treason.” Wonderfully ironic to see the far left embracing American patriotism and their (incorrect) view of American interests. I thought borders were an outdated relic of our nationalist past for these folks. https://t.co/CAk33H0sZ6

European (and American) nationalists are not on board with the hate-Russia narrative promoted by neocons and other establishment types that pervades the West. https://t.co/cPmXkUiTJH

But more than all that, the “Trump the traitor” rhetoric appeals to quite a few mainstream Republicans who would not fall for the liberal line on immigration but who are definitely part of the hate-Russia crusade—some of them just exhibiting a reflex left over from the Cold War, while others are in thrall to the to the Israel Lobby’s hatred of Putin because of his pro-Iran, pro-Syria policies. (Sascha Baron-Cohen’s recent Showtime stunt is an indication of how reflexive support for Israel can make Republicans advocate ridiculous policies like arming 5-year-olds with guns.)

“David Frum, a former George W. Bush aide, expressed anger that the episode has exposed the degree of reflexive support for Israel in the US. Cohen takes advantage of people’s affection and respect for the State of Israel to deceive and humiliate them.” https://t.co/IH8pXsU3j2

I should also mention Putin’s treatment of certain Jewish oligarchs who have attempted to influence Western policies toward Russia (e.g., Mikhail Khodorkovsky). A truly stunning moment in the Trump-Putin presser (all but ignored in the MSM) was Putin saying that Bill Browder and his associates had illegally earned $1.5 billion in Russia (“the way the money was earned was illegal”) without paying taxes either to Russia or the United States where the money was transferred. And that he and his associates had contributed $400 million [poorly translated; likely $400,000] to Hillary Clinton’s campaign. While the charges back and forth are impossible to for me to evaluate, Browder’s firm, Hermitage Capital Management, has been involved in other accusations of fraud. Browder was the main force promoting the Magnitsky Act, signed by President Obama in 2012, that barred Russian officials said to be involved in the death of Sergei Magnitsky, a Browder associate, from entering the U.S. or using the U.S. banking system.

Here the point is that American neocons have been in the forefront of hostility over Putin’s treatment of Jewish oligarchs, taking the view that Browder et al. are completely innocent victims of Russian evil. Along with Russian foreign policy, Putin’s actions toward the oligarchs is one factor in neocon and hence some factions of the GOP toward Russia. It’s no surprise that they are now eagerly joining the hate-Trump chorus throughout the American establishment.

Put all that together, and it’s a powerful array against Trump. We’ll see what the polls say, but there’s no doubt that many pro-Trump voters will be troubled by accusations of treason and appeasing Russia in a way they wouldn’t about hostility toward Trump’s policies on immigration. As usual, this media furor is couched as a moral imperative. And although the public (especially Whites) are getting less and less susceptible to moralistic rhetoric, I suspect that this is not so much the case with accusations of disgraceful, treasonous behavior by the president.

In any case, I hope Trump survives this hatestorm. His policies on immigration have been a breath of fresh air (I know, they could be even better but they are way better than any administration in memory—since Eisenhower’s Operation Wetback). And immigration is really the only issue.