Unlike in the English-speaking world, most countries in Continental Europe sadly do not collect official statistics documenting the ethnic situation. In France, the mainstream media goes so far as to desperately claim that the Grand Remplacement (Great Replacement) of the indigenous French population, which is visible in every city, is a mere “conspiracy theory.” The media hacks, who for the most part work for or are subsidized by the state, really take their fellow-citizens for fools.

Meanwhile, intrepid, genuinely independent citizen-journalists are doing the work which the official media refuses to do by trying to measure this development. The nativist French website Fdesouche recently published the percentage of newborns given Muslim names in France and Belgium, according to official statistics.

As can be seen, France and Belgium have experienced similar developments, with the granting of Muslim names rapidly rising from 5-8% in 1995 to around 20% today: 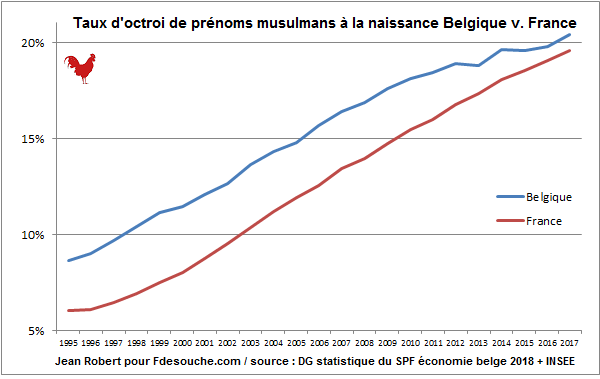 Fdesouche had previously found that one third of newborns in France were tested for sickle-cell disease, a procedure usually performed if the infant was of African or Middle-Eastern origin. Given that Muslims by no means make up all of France’s non-White immigrants, the data is broadly congruent.

We find that in Belgium as elsewhere, the Muslim and immigrant population is overwhelmingly concentrated in the major cities and notably the capital city of Brussels. However, the percentage of Muslim births has more than doubled in Flanders and has quadrupled in Wallonia in just over two decades. If current policies are maintained, Western Europe will be an Islamic continent before the end of the century. 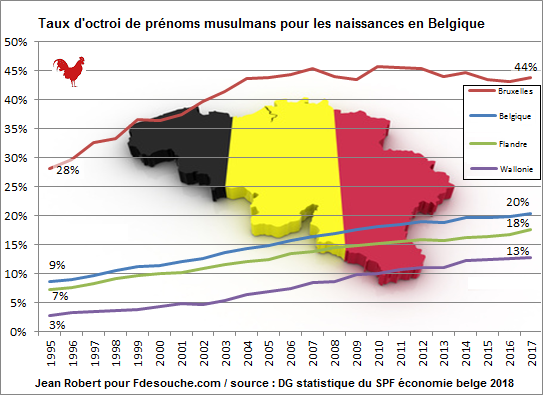 I don’t need to tell you about the dire fate faced by women, (White and/or Christian) minorities, and science across the Islamic world. In addition to the regular terrorist attacks committed by Muslims in Europe, our nations will be vulnerable to the kind of vicious civil conflict between Muslims and non-Muslims that we see in Bosnia, Lebanon, Iraq, and Syria.

The increase in the Muslim population appears to have halted in the city of Brussels however, just short of a majority. Fdesouche explains this development through the following factors:

Brussels has become more economically prosperous in recent years. Native Belgians represent an absolute majority of the population and non-citizens make up about a third of the population. However, many of the foreigners present are fellow-Europeans. There is a large French population and there has been a massive influx of southern and especially eastern Europeans, notably Romanians. Incidentally, the presence of Gypsy beggars from Eastern Europe is now an unavoidable sight in most of Western Europe’s major cities. This “activity” is highly organized, as the Gypsy clans have made a business of it, making regular trips “home” back to Eastern Europe (in fact, they are originally from India, descending from the lowest Hindu castes).

We ought to be cognizant of the fact that the “global cities” appear to be quite economically and socially viable for the foreseeable future. The most intelligent of our people, indeed of the entire planet’s population, are moving to Silicon Valley, New York, London, Paris, Brussels, and so on. The functionality of these cognitive elites seems to more than make up for the masses of low-quality immigrants. There is a working modus vivendi whereby the rich Whites and foreigners drive out dysfunctional minorities through rising property prices, inflicting them on the hapless White middle and working classes in the suburbs.

The surveillance/welfare state is largely capable of jailing/baby-sitting minorities as necessary, as we see in Michael Bloomberg’s New York and across Western Europe. Each city becomes more or less residentially segregated quite naturally, with the metropolitan Whites generally moving beside fellow Whites despite their “anti-racist” sentiments (see the situation in New York and London). Furthermore, the foreign ethnic groups generally form no single ethnic and/or religious, but are themselves divided into innumerable ethno-religious groups: this limits political conflict insofar as no single group is large enough to have undisputed power. Where only two or three ethnic groups can credibly vie for power, this tends to be a major cause for ethnic civil war. Our “global cities,” while being forces for dysgenic reproduction and ethnic entropy, appear quite sustainable for the time being.

But for how long?