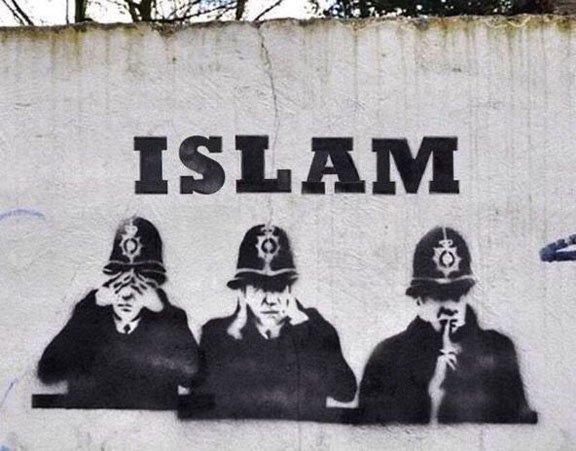 The Observer is the Sunday edition of the Guardian. It published an editorial on the Huddersfield Horrorshow stating that the “victims of the horrific events in Huddersfield and other cities are not best served by a polarised debate on race.” It then proceeded to obfuscate in typical lying liberal fashion (“obfuscate” is from the Latin obfuscare, meaning “to make dark”). Here is some of what the Observer said, with my responses:

No words can do justice to the horrific abuse perpetrated by a gang of 20 men in Huddersfield, believed to be Britain’s single biggest grooming prosecution. The men plied vulnerable girls as young as 11, including those in care and with learning disabilities, with alcohol and drugs in order to sexually abuse them. The abuse included men raping intoxicated girls while others watched, sexual abuse with a drinks bottle and gang rape by men using plastic bags as condoms.

There is an understandable urge to react out of raw anger. Yet the most important question we can ask as a society — calmly, rationally — is how to prevent this sort of abuse from happening again. (The Observer view on dealing with child-grooming gangs, 21st October 2018)

In fact, the most important question for the Observer is how to conceal the truth and how to evade responsibility for its own role in these horrors. The Observer is still using the euphemistic term “child-grooming gangs” when the proper term is “child-rape gangs.” And it’s impossible to “prevent this sort of abuse from happening again,” because Britain contains millions of non-White men steeped in “the Patriarchy” that reigns supreme in Third-World bastions of “rape-culture” like Pakistan. The Observer has fully supported mass immigration and wants millions more non-Whites to enrich Britain with their rape-culture and misogyny.

But the vexed issue of the ethnicity of the perpetrators — they were all of Asian descent — has prepared the way for a kneejerk reaction and a polarised debate between those who argue that these men’s race and faith are the main factors driving these crimes on the one hand and those who strenuously deny that they play a role at all. (The Observer view on dealing with child-grooming gangs)

The Observer obfuscates: the men were all of Pakistani descent and nearly all were Muslim (one was a converted Sikh who may originally have been Muslim).

What lies at the root of such criminal behaviour is likely to be extremely complex. (The Observer view on dealing with child-grooming gangs)

It’s not “extremely complex” to feminists, who blame “such criminal behaviour” on The Patriarchy and its rape-culture. The Patriarchy and rape-culture are much worse in Pakistan and other Third-World nations, so it follows logically that feminists should oppose mass immigration from the Third World. They don’t, of course: they enthusiastically support it. That’s why they have to lie about its consequences and demonize those who speak the truth about it.

It is clearly wrong to imply, as many have, that faith and culture are the only driving factor. Profession may play a role: Asian men are more likely to work in the night-time economy, which gives them greater opportunity to exploit vulnerable children. (The Observer view on dealing with child-grooming gangs)

The disgusting prejudice towards the mainly white, working-class victims in places such as Rotherham and Rochdale was not limited to the mainly Asian perpetrators, but extended to the police and social workers. (The Observer view on dealing with child-grooming gangs)

“Social workers” are overwhelmingly left-wing and are avid readers of the Observer and Guardian. The British police have been trained in Guardianista ideology for decades. If these two groups exhibit “disgusting prejudice” towards the White working-class, this is because Guardianista ideology has taught them that Whites are all-powerful oppressors and non-Whites are powerless victims.

But neither can culture nor their own racism be taken off the table as contributing factors in explaining how individuals become perpetrators. It would be preposterous to suggest that the sexual exploitation of children is concentrated among people of a particular ethnicity: it goes on everywhere. (The Observer view on dealing with child-grooming gangs)

It is not at all “preposterous” to suggest that “the sexual exploitation of children” is “concentrated” among “people of a particular ethnicity.” White men still outnumber Pakistani men in Yorkshire and some White men in Yorkshire sexually abuse women and children. But it is plain that Pakistani men are committing much more and much worse abuse there than White men are. In other words, “the sexual exploitation of children” is “concentrated” among Pakistanis. The Observer has to deny this plain reality or its risible ideology of “human equality” would collapse.

But it is certainly plausible that within different cultures sexual abuse might take different forms, or manifest itself in different ways, and, if so, it is crucial to understand that.

It is imperative, though, to be clear that exploring this question to inform the prevention of abuse in no way implies whole ethnic or faith communities are more likely to sexually abuse children than others. That’s why the home secretary’s careless, simplistic tweet about the case was deeply irresponsible. (The Observer view on dealing with child-grooming gangs)

In other words, it is “imperative” for Britain’s liberal elite to continue denying the truth. Quite clearly, men from some “ethnic or faith communities” are much “more likely to sexually abuse children than others.” Blacks and Pakistani Muslims are still minorities in Britain, but Pakistani Muslims are the majority of those gang-raping and prostituting White girls in Yorkshire and elsewhere, just as Blacks are the majority of those committing gang-rape in London against women and under-aged girls, a disproportionate number of whom are White.

There will almost certainly be another trial, another set of horrifying revelations. To complement the review of the institutional failures that allowed child sexual exploitation to happen, we also need to improve our understanding of how and why these men commit their vile crimes, with no potential explanation off the table. But the sad reality is that this is unlikely to happen in a climate where everyone from the home secretary down is so quick to fill in a narrative that best serves themselves, not the young victims. (The Observer view on dealing with child-grooming gangs)

It is to laugh. The Guardian and Observer don’t have the slightest concern for the “young victims.” As the Labour MP Ann Cryer said of her attempts to expose the similar horrors taking place in her Yorkshire constituency: “I couldn’t get The Guardian interested. Its reporters seemed paralysed by political correctness. When I wasn’t being openly accused of racism and religious hate — my name was on the website Islamophobia Watch — I was painted as someone who didn’t understand Asian culture.”

The Guardian and Observer are still lying, still obfuscating, still refusing to admit responsibility for their role in these horrors. That’s why editors and journalists from these newspapers should be right at the top of the list of those who will one day be put on trial in Britain for treason and for “crimes against humanity.” Rape is a weapon of war, as the Guardian has so often told us. Decade after decade, liberal journalists have collaborated with non-White rapists waging war against Britain’s Whites. See above.