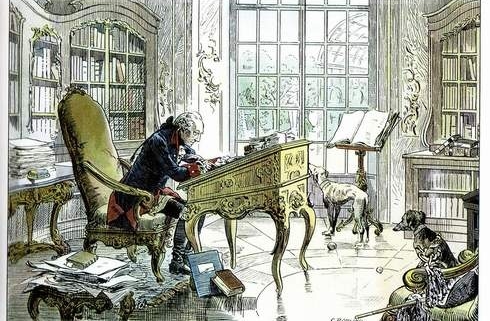 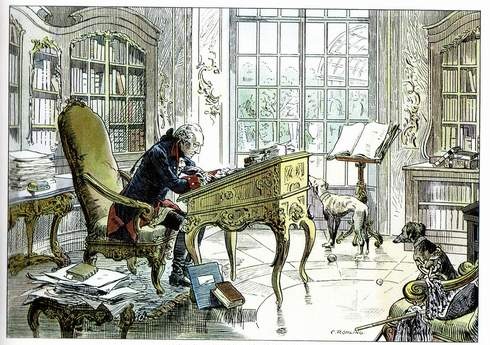 The Political Testament of 1752 and the Jews: “The Most Dangerous of Sects”

Frederick the Great’s two political testaments are significant documents—systematic presentations of political doctrine, which rulers of Brandenburg-Prussia had composed since the days of the Great Elector (apparently inspired by Richelieu). These expound not only many of Frederick’s general doctrines but also contain his longest and most explicit comments on Jews and justifications concerning his Jewish policy. These are therefore essential documents for understanding the monarch’s thinking.

In the Political Testament of 1752, the Jews are presented essentially as an economic problem. Their numbers in Prussia had increased substantially following Frederick’s conquest of Silesia in the 1740s, which had also lengthened the country’s border with Poland, where Jews had an important economic role. Under the heading, “On Rules for Commerce and Manufactures,” Frederick writes on the need for industrial policy, local manufacturing, and tariffs. In this context, he says of the Jews:

One must watch over the Jews and prevent them from getting involved in wholesale trade, prevent their numbers from increasing, and, at fraud they do, deprive them of the right of residence, for nothing is more contrary to the merchants’ commerce than the illegal trade done by the Jews.[1]

Frederick, a deist, was essentially contemptuous of all traditional religious stories and organizations. Under the heading “On Ecclesiastics and Religions,” he advocates religious tolerance rather than fanaticism, ensuring civil peace and prosperity for “Catholics, Lutherans, Reformists, Jews, and many other Christian sects.”[2]

All that having been said, Frederick notes that the Jews are nonetheless “the most dangerous of sects” due to their economic practices:

The Jews are the most dangerous of sects, because they harm Christian trade and are useless to the State. We need this nation for some trade with Poland, but one must prevent their numbers from increasing and fix them, not at a certain number of families, but a certain number of heads, and restrict their commerce and prevent them from wholesaling, so that they only be retailers.[3]

Frederick therefore opposed Jews not on religious grounds but because he thought them prone to fraud, detrimental to other businesses, and useless to the State, except in enabling trade with underdeveloped Poland. Frederick argues for Jewish policy to be motivated strictly on utilitarian economic grounds rather than on religious or racial ones: practical measures included both economic policy (keeping Jews out of wholesaling), and a voluntarist population policy aimed at limiting Jewish numbers (headcount not family count), but also including the forcible deportation of those found guilty of fraud.

The Political Testament of 1768 and the Jews: Against Usury and Fraud

Frederick’s Political Testament of 1768 still predates the first partition of Poland, during which the Jewish population of Prussia would grow with the annexations of Polish territory. Nonetheless, this Testament too dedicates significant attention to the Jews, essentially presented as an economic problem. Jews are denounced again, this time not only for fraud but also usury. Hence, under the heading “On the Bank,” dealing with lending, Frederick praises “the Lombards established in the big towns, who lend money for manufacturing and other works at low interest, to prevent the Jews from crushing the peoples through usury.”[4]

Under the heading “Views for the Future,” Frederick expounds on the need to develop the country, its agriculture, cities, and industry. Again, Frederick notes the Jews’ usefulness for trade with Poland, but otherwise finds them harmful:

We have too many Jews in the cities. We need some on the border with Poland, because in that country there are only Hebrew merchants. If a city is not close to Poland, the Jews become harmful by their usury, by the contraband among them, and by the fraud undertaken to the detriment of the Christian bourgeois and merchants. I have not persecuted the people of this sect; but I believe it is prudent to ensure that their numbers do not increase too much.[5]

Frederick mentions the Jews a final time under the heading “On the General Police,” charged with enforcing order, safety, and good manners. He writes that the police must, among other duties, ensure that “the Jews do not crudely conduct their usury.”[6]

Frederick’s basic attitude on Jews had thus not fundamentally changed between 1752 and 1768. Claiming to not be motivated by religious prejudice, purely economic and political reason, he denounced their “crushing the peoples through usury” and their “thousand scams [friponneries] which turn to the detriment of the Christian burghers and merchants.”[7] They were again only useful in Poland and their numbers ought to be carefully limited.

Conclusion: The Contradictions of Frederick the Great’s Jewish Policy

Frederick the Great’s attitudes and policies towards the Jews were free from religious or racial prejudice, animated by the Enlightenment’s spirit of toleration for religious minorities. In other words, because of Enlightenment values, he was naturally inclined in a theoretical, a priori sort of way to view Judaism as deserving tolerance, just like other religious sects. However, in practical terms, he realized the harm that Jewish business practices caused to the non-Jewish population whose interests, after all, were his main concern. And he inherited a contradictory set of policies from his predecessors which aimed at simultaneously limiting the Jewish population and the economic problems associated with it, while economically profiting from that population’s licit or illicit activities. Frederick’s own experience in government and warfare led him to essentially maintain, rationalize, and further develop these policies.

Frederick himself had a liberal reputation as an “enlightened despot.” The French philosopher Jean le Rond d’Alembert wrote him:

[The Austrian emperor] is apparently granting the Jews freedom of conscience and the status of citizens, which his ancestors the august emperors would have regarded as the greatest crime. It is you, Sire, whom humanity and philosophy must thank for all which the other sovereigns are doing and will do to favor tolerance and suppress superstition; because it is [Your Majesty] who gave them the first great example.[8]

In fact, Frederick’s policies were quite restrictive on the whole, but this statement is symptomatic of the secularizing Enlightenment’s move away from religiously-defined citizenship and toward the gradual recognition of Jews as individual citizens, free of any group loyalty or ethnic bias.

In fact, assimilation and shedding of group identities and ties did not occur at any level of the Jewish community, including the movement of Reform Judaism, and it was never intended by any significant segment of the Jewish community. Jews had warmly greeted the Enlightenment and “emancipation” but refused to accept the Enlightenment’s premise that group ties would be rejected in favor of a thoroughgoing individualism. As Israeli historian Jacob Katz noted,

The predicament of emancipated Jewry, and ultimately the cause of its tragic end, was rooted not in one or another ideology but in the fact that Jewish Emancipation had been tacitly tied to an illusory expectation—the disappearance of the Jewish community of its own volition. When this failed to happen, and the Jews, despite Emancipation and acculturation, continued to be conspicuously evident, a certain uneasiness, not to say a sense of outright scandal, was experienced by Gentiles. . . . If gaining civil rights meant an enormous improvement in Jewish prospects, at the same time it carried with it a precariously ill-defined status which was bound to elicit antagonism from the Gentile world.[9] (Katz 1983, 43)

Jewish writers on this period have rightly emphasized the self-contradictory and even self-defeating quality of Frederick’s policy of accepting Jews for economic reasons but seeking otherwise to limit their numbers and influence. As the number of wealthy Jews gradually rose, these steadily increased pressure on the government to eliminate checks against them, a self-reinforcing pattern common in Western history. The Jewish Encyclopedia writes:

During Frederick’s entire reign the Prussian Jews continually protested against harsh edicts, but without much success. In 1763, however, succession to the rights of the Schutzjuden was extended to second sons on condition that these take up manufacturing. For this privilege the Jews had to pay 70,000 thalers. For further privileges the Jews had to purchase a definite number of pieces of porcelain from the royal porcelain manufactory.[10]

In Berlin, Breslau, and Koenigsberg the upper strata of the Jews, who were rich and influential, took the first steps toward assimilation, acquiring the General-Privilegium, which granted them the rights of Christian merchants (such as freedom of movement and settlement). Through the First Partition of Poland (1772) Prussia’s Jewish population had almost doubled, and Frederick feared above all an influx of Jews from the newly annexed province of West Prussia.[11]

It is no wonder that Frederick’s policy proved unsustainable and was gradually dismantled by his successors. The Jewish Virtual Library notes: “Frederick’s nephew, Frederick William II (1786–97), inaugurated a period of liberalization and reform in Prussia. As crown prince, he had borrowed large sums from Berlin’s Jewish financiers.”[12] The vicious circle of Jewish emancipation, Jewish economic, political, and cultural empowerment, and anti-Semitism would of course culminate in the apocalyptic conflict between Jews and Germans in the first half of the twentieth century.

[2]Ibid. Frederick added, in a manner typical for Enlightenment politicians, that while he was contemptuous of religions one ought to be respectful in public:

It is indifferent in politics whether the sovereign has a religion or not. All religions, when examined, are based on some fabulous and more-or-less absurd System. It is impossible for a man of good sense to enter into these matters and not witness Terror; but these prejudices, these errors, this wonder are made for men, and one must know how to respect the public to not scandalize them in their religious practice, whatever their religion be.