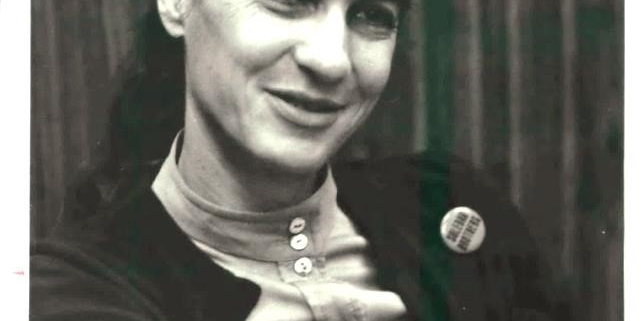 Fay was disenchanted and depressed. She had turned forty. She had lost her female lover, was losing her husband, and her most cherished political cause had blown up in her face. It was 1973, and the entire “Movement” had sputtered to a halt and was in the process of metamorphosing; the radicals had lost their faith in militant activism outside “the system” and began to enter that system in droves to work from within. The process was not smooth; many leftists spent years coming to terms with the collapse of the movement.

Since any facet of society could be turned into a “cause,” Fay would not be adrift for long. Soon she turned (along with many other radical Jews) to feminist and homosexual issues. She entered another relationship with a woman, called “Katherine” by Pearlman. One of the cases she became involved with helped push California law into accepting the “rights” of lesbians in custody cases.[i] Another gash in the fabric of Gentile society.

In 1978, Fay went on a tour of Europe with her old friend Hilde Stern. It was a soul-searching jaunt. She wanted to ponder her future direction, and whether to try to save her marriage. Once in Europe, her Jewish identity rose to dominate her consciousness. She visited the synagogues and places of Jewish interest wherever she went. In Athens, viewing the ancient structures on the Acropolis, she felt only “an overwhelming urge to reaffirm her own heritage” and peevishly wondered “why her professors had never credited ancient Jewish culture with any lasting influence on Western tradition.”[ii]

In Geneva she visited friends and gifted them, as if it were a priceless artifact, a letter she had kept from George Jackson. She went to Stockholm for a UN conference on children. There she began to do push-ups in imitation of the imprisoned Jackson, who had done hundreds every day, and worked on manuscripts about Jackson and feminism.[iii] She thought about living permanently in Sweden, but it troubled her that Sweden had continued its relations with Germany during World War II. She proceeded to Warsaw for another conference; she had read up on the Warsaw uprising of 1943, and was angered to find so little commemoration of the event in the city. She was well aware of the Jewish history in Poland and was in high dudgeon against Polish “Anti-Semitism.” At the Warsaw Symphony she was “anguished by the absence of any musicians who looked even faintly Jewish.”[iv] (Would she have any sympathy for Whites, who in the near future will look in vain for fellow White faces in their own nations? Would she see the contradiction if she did not?)

She also thought about her sexual identity. She decided to break up with Marvin for good and reunite with her lesbian lover. In early 1979, she returned to Berkeley. She and Marvin ended their marriage amicably, and Fay kept the house and the children, who lived at home in their young adulthood. Fay resumed her relationship with “Katherine.”

May 28, 1979. The doorbell rang, well after midnight. Fay’s son Neal, used to unexpected visitors, opened the door. A Black man stuck a gun in his face and demanded Fay Stender. Neal led him upstairs and roused his mother from bed. The man demanded an answer to a chilling question: “Don’t you feel you betrayed George Jackson?” Fay calmly denied it. He ordered her to write a dictated note and sign it: “I, Fay Stender, admit I betrayed George Jackson and the prison movement when they needed me most.” She protested but finished writing. He pocketed the note then demanded money; Fay escorted him downstairs and gave him some from her kitchen drawer. He walked past her to the door as if to leave, then wheeled, crouched, and shot her five times with hollow-point .38 caliber bullets.[v]

Fay suffered terrible damage to her liver, chest and arms; she was paralyzed from the waist down. She would face months or years of rehabilitation and would never again lead a normal life. She didn’t leave the hospital until late July, going straight into a rehabilitation center.

The shooting shocked the radical community in the Bay Area. The police shared with reporters a purported “hit list” with the names of Fay and others on it. Fay’s family and friends were terrified; some of them asked for police protection. Marvin obtained a gun permit and sent their children into hiding. A few radicals began to suspect the truth about convicts.

Despite her depression and pain, she resolved to put her assailant away. To find justice, she would need the help of—exquisite irony—Lowell Jensen, still District Attorney. Jensen, incredibly, bore her no ill will, and assigned her case to a good prosecutor.

The police quickly apprehended a suspect, Edward Brooks. He was an ex-con and a member of a prison gang co-founded by George Jackson, the Black Guerrilla Family. He had shot Fay from a sense of loyalty to Jackson and other prisoners whom Fay had supposedly betrayed.[vi]

The shooting of Fay highlighted the hypocrisy in the radical community. Almost all of them now supported the police and district attorney and wanted the shooter prosecuted, even though they had “spent their professional lives denouncing the criminal justice system as an instrument of racial and class oppression and defending accused criminals as social victims.”[vii] The hypocrisy reached a greater poignancy when a former colleague of Fay’s, a member of the Prison Law Project, appeared on the shooter’s defense team, stating later, “I was just seething at the way the White Left reacted to Brooks’ arrest. It was racist. They had never taken this attitude . . . in the past. . . . And yet, when one of their own was shot, they immediately cooperated with the cops.”[viii]

Fay was plunged into despair, alternating between self-pity and bitter anger over how the Blacks had repaid her ministrations. She could barely play the piano and could not sit up for long; she found relief only by lying on her back. She sent her Sapphic lover away, unable to have (what amounted to) abnormal relations. She really wanted Marvin back for his steady strength, but he had a new woman and declined her hints. She resolved to commit suicide, but wanted to see Brooks put away first. She would have to summon the strength to testify against him, in the same courtroom she had defended Huey Newton so long before.

On January 18, 1979, Fay took the stand. Charles Garry was in attendance, but not a single Black recipient of her aid showed up to support her. The jury quickly found Brooks guilty, and a few weeks later he was sentenced to seventeen years.[ix]

Fay then burned all her papers, moved to Hong Kong, and after a good deal of hesitation and anguish, killed herself on May 19, 1980. She was forty-eight. Her body was brought back for a Jewish funeral, attended by 300. David Horowitz, former editor of Ramparts, was present; he was struck by how few Blacks attended. (He would write a long article on Fay, based on his conversations with Eve Pell, who had worked with Fay on the Prison Law Project.) Another radical in attendance observed, “no matter what you do, if you are White, it doesn’t matter if you spent your whole life working for Blacks.”[x]

Huey Newton did not attend the funeral; the next month he would earn a sham Ph.D. from UC-Santa Cruz (submitting—perhaps even writing— a paper entitled “War Against the Panthers: a Study in Repression in America”[xi]). He would be shot dead on an Oakland street in August 1989, also by a member of the Black Guerrilla Family. He was forty-seven, the same age as Fay when she was shot.[xii]

The saga of Fay Stender thus sputtered to an end.

Fay’s life perfectly illustrates the nature of radical Jewish activism and the immense harm that it can inflict upon society. Her work amounted to nothing more than “disruption of White society.” Her Jewish perspective could not register the rationales that underlay the compromises between perfect justice and practicality that form the myriad bonds of a Gentile culture. White society is not perfect; it is not perfect because man’s nature and the world are not perfect. However, it is on balance just, and, above all, workable. To strain mightily to “perfect” the solid patterns of a settled society is to create tensions that inevitably build to an explosion. The explosion in Fay’s case saw guards massacred in San Quentin and five bullets pierce her own body.

Fay Stender indicted the entire justice system as “racist” without bothering to regard the nature of Black social pathology, or the damage that her activism could cause to a society that had settled itself around a workable solution to pervasive Black crime, or the personal danger that she risked for herself and her family.

One last note on personality. I believe that Fay possessed a measure of charity; that is, a will to do good. No one is purely evil, of course, and somewhere in the thicket of ego, ambition, leftist ideology, and blind selfishness that was Fay Stender, there was at least a small core of good intentions. Unfortunately, her good will labored under defects greater than these failings. First, unhampered female emotion crimped her ability to see a reasonable approach to problems. (A Gentile spouse of that era would certainly have forced her to accept far tighter boundaries on her activity.) There was the contempt she felt—possibly amounting to hatred—for Whites and their society. Most importantly, the nature of her Jewish radicalism, as applied to a Gentile society, could be nothing but deleterious. If a mathematical formula could be found to represent the harm that an activist Jew can do to a White society, it would have to incorporate a special symbol representing “one Fay Stender.”