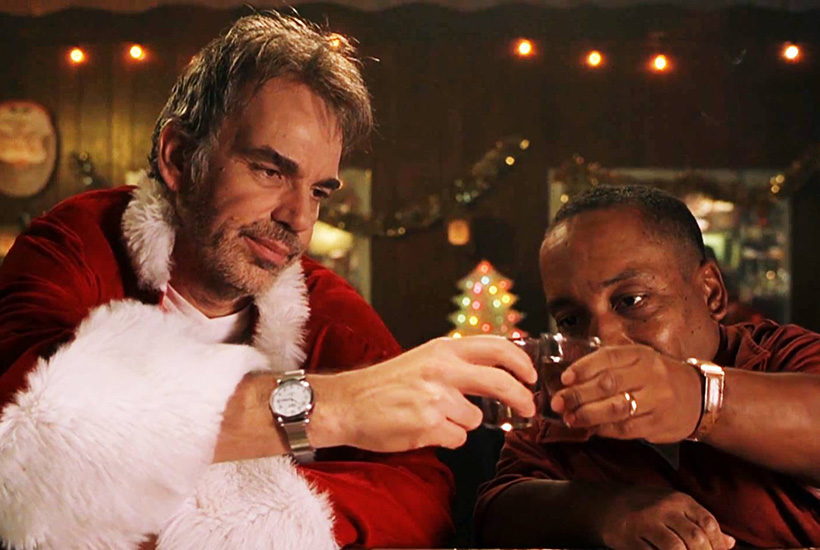 It’s that time of year again. Time for Jewish angst about Christmas. The Tablet has a revealing article by Adam Chandler that gets at the Jewish view of the season (“All-Star Team of Jews Defiles Christmas in Billy Bob Thornton’s ‘Bad Santa’: How the Coen brothers and Terry Zwigoff helped create a holiday classic that angers gentiles“). Described as “the greatest Christmas movie of all time,”

ten years after its release, Terry Zwigoff’s Bad Santa, a rail whiskey blend of Brecht and Bukowski, has become a holiday standard. Brought to life by a Jew from Wisconsin (Zwigoff) and four Jewish brothers (two Coens and two Weinsteins), it is regarded as a classic send-up of Christmas culture gone awry. The crude, brilliant movie is a staple of Comedy Central’s December line-up.  …

With an assault of impiety, the film makes Christmastime in America seem an impossible place to be if you live at the margins. The way that message is conveyed throughout the movie, however, is more fluid than solid. After his introductory monologue, Willie stumbles into the alley behind the bar where, with the Chopin nocturne still lilting, he upchucks loudly into the snow. It’s a beautiful shot, retching Santa and all, that ends with the postcard appearance of the movie title in red lettering.

Uplifting stuff for the holidays. The artistic contribution of the Coen brothers is critical:

In an interview last year, director Terry Zwigoff explained how the Coen Brothers turned Bad Santa from holiday pastiche into scorched earth. “Like the kid would ask Santa, ‘Do you and Mrs. Santa ever think of having kids?’ And in the original script it was just, ‘No, thank God.’ And the Coens made that into, ‘No, thank the fuck Christ.’ That’s their gift. They have a gift for dialogue.”

Such an improvement! The gleeful desecration of all that is held dear by the hated and resented outgroup.

Indeed, IMBD reports that “The unrated version of the film furthers the record for the most profanities in a Christmas film, including 170 uses of “fuck”, 74 uses of “shit”, 31 uses of “ass”, 10 uses of “bitch”, and 1 use of “bastard”, in variable forms.”

And the best part for the Adam Chandlers of the world is that it doesn’t really have a Christmasy ending: “While Bad Santa jerks in the direction of a happy ending, there is little redemption to be had. After all, no one is asking that we get into the spirit of Christmas or channel its goodwill. For a Jew at Christmastime, it’s all we could ever want in a holiday movie.”

The following column on a scholarly book on the Jewish role in subverting Christmas ran last year around this time:

A new book, Joshua Eli Plaut’s A Kosher Christmas: ’Tis the Season to Be Jewish, documents what we have known all along: The Jews did indeed subvert Christmas.  This book deserves a full review, but Ethan Schwartz’s summary and comment (“Twas the night after Christmas“) deserve scrutiny. First the summary:

Jews have been the vanguard of an effort to “transform Christmastime into a holiday season belonging to all Americans,” without religious exclusivity.  The most important Jewish mechanisms of secularization are comedy and parody, for laughter undermines religious awe.  Take, for example, Hanukkah Harry from “Saturday Night Live”, who heroically steps in for a bedridden Santa by delivering presents from a cart pulled by donkeys named Moishe, Hershel, and Shlomo.  Remarkably, Hanukkah Harry has emerged as a real Santa-alternative for many American Jews.  Plaut sees such things not as attempts at assimilation but as an intentional subversion of Christmas traditions.  “Through these parodies,” he writes, “Jews could envision not having to be captivated by the allure of ubiquitous Christmas symbols.”  And it isn’t just Jews: for Americans in general, Jewish parody helps ensure that Christmas “not be taken too seriously” and that the celebrations of other traditions “be accorded equal respect and opportunity.”

There seem to be two messages here. One is the message of subversion utilizing ridicule among other methods. The other is that Jews are seen as high-mindedly making Christmas  “into a holiday season belonging to all Americans.” The end result is that Christmas is not “taken too seriously” and the Christian religious aspect central to the traditional holiday is de-emphasized.

People who take their religion seriously do not allow their religion to be ridiculed. One need only think of the Muslim reactions to cartoons ridiculing Mohammed. The fact that Jews have been able to ridicule Christianity without any serious negative consequences is an important marker of Jewish power and an equally strong indication of the decline of Christian religious belief. I suspect that the organized Jewish community would react in outrage if non-Jews ridiculed religious Judaism. One can only imagine the elite outrage if one ridiculed the Holocaust which has become a religious symbol of the new culture.  Indeed, any criticism of Jews as Jews is off limits in the mainstream media. (A topical short list of verboten topics: the loyalties of neocon Jews and their role in promoting the war in Iraq, the Jewish aspect of the Ivy League admissions scandal, how Jewish control of Hollywood influences media content.)

Schwartz doesn’t quarrel with Plaut’s evidence, but wonders if it’s good for the Jews that such a book be written:

There is something disconcerting about this thesis, summoning up classic anti-Semitic images of conspiracy and sabotage.  Without a trace of irony, Plaut recounts incidents in which fundamentalist Christian groups complained that “certain Americans, particularly Jews, were trying to take the ‘Christ’ out of Christmas.”  He adds that “anti-Semitic comments often ensued.”  Those Christian fundamentalists might well feel vindicated by Plaut’s argument; yet Plaut is unfazed by this connection, and rightly so.  It is not inherently anti-Christian, he recognizes, to oppose Christianity’s domination of a secular democracy.  If Jews have helped to make American society more open, they should be proud of it.

So Jews subverted Christmas but their motives were pure and idealistic. [Somehow Adam Chandler’s pure idealism fails to come through in his comments on Bad Santa.] But such an account ignores the Jewish role in conceptualizing America as a proposition nation—a major topic of The Culture of Critique. The Jewish stress on cultural pluralism (which has now morphed into multiculturalism) was an explicit rejection of the ethnocultural strand of American identity, an important part of which was Christianity. (Indeed, until the recent wave of immigration resulting from the 1965 law, Jews constituting 2–3 percent of the population, were the only identifiable American group that was not Christian.) Jews were central to building a wall between religion and the public square which has resulted in the “war on Christmas” that we still see raging. Jews were also central to changing U.S. immigration policy to be open to all the peoples of the world, again with an ideology that America is merely a set of abstract principles and has no ethnic or cultural core; therefore it should be open to all peoples and these peoples should be able to retain their own culture as part of the American mosaic.

I realize that many good people shy away from saying it, but the reality is that Jews have very aggressively pursued policies that benefit them and are opposed to the interests of the traditional people of America and the West. And because Jews attained status as an intellectual and media elite, they have been able to have a very large effect on public policy and even on the attitudes of non-Jews.

Plaut emphasizes the difference between the very aggressive behavior of Eastern European immigrants with their hatred of Christianity contrasted with the German Jews who arrived in the mid-19th century and “embraced the holiday.” It’s an important distinction, at least in the American context. But in any case, Plaut’s description of the motives of the Eastern European as stemming from their hatred of Christianity hardly paints them as idealistic crusaders on behalf of an open society.  It bears repeating once again that Jews react with hostility to the idea that Israel should not have a Jewish ethnocultural core while they have led the campaign against the idea that America and the West have any ethnocultural core. As with their promoting non-White, non-Christian immigration, their advocacy has nothing to do with ideals of moral universalism but everything to do with pursuing what’s good for the Jews, motivated by Jewish hatreds toward the traditional people and cultures of the West. The war on Christmas is thus a central example of the theme of Jews as a hostile elite.