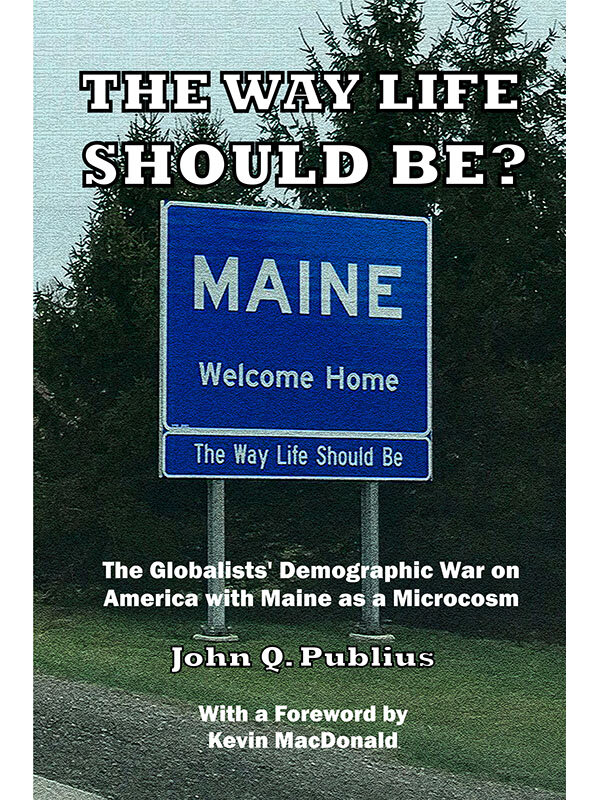 The Way Life Should Be? The Globalists’ Demographic War on America, with Maine as a Microcosm
John Q. Publius
Ostara Publications, 2020; $16.95

The power of the pro-immigration lobby is well known and often written about. The vast majority of this writing is concerns events at the center of American political culture, at the federal level. There is good reason for this. Most immigration policy is produced at the federal level, and states such as Arizona and California that have attempted to enact legislation limiting immigration in one way or another have been slapped down by the judicial system.

In general, the pro-immigration forces have gotten their way. The main players are well known: the ethnic lobbies seeking more of their people as immigrants, leftist activist organizations seeking to alter the demographic and political balance of the U.S., together with big business interests intent on importing cheap labor.

The uniqueness of John Q. Publius’s The Way Life Should Be? is that it delves into how the pro-immigration forces have penetrated down to the state and local level. It focuses on what may seem like an unlikely target—the state of Maine which, as of this writing, remains around 95 percent White. It is also the most rural state east of the Mississippi, with a population of around 1.4 million.

But Maine is nevertheless the target of an extensive network of NGOs and various other religious and secular groups masquerading as charities that have focused their efforts on importing as many Third World peoples into the United States as possible. In this effort the NGOs are joined by business, political, academic, and media elites. Maine is thus a microcosm of what is happening in the rest of the country. The only group left out in all this are white middle-and working-class Americans who bear the burden of this onslaught in terms of increased taxes and a deteriorated social fabric.

Before embarking on all the detailed workings of these interlocking interest groups and their effect on immigration, Publius provides an excellent overview in the Introduction. It is an unequaled portrait of the big picture of how the neoliberal establishment has operated since the 1970s. The main trends are clear: the transformation of the economy from a focus on manufacturing to finance, outsourcing of jobs to foreign countries, free trade, the decimation of labor unions, importing a new underclass from the Third World, and a decline in an ideology of economic or political nationalism. This has had the effect of enriching those at the top of the economic pyramid—Wall Street and those who own or manage multinational corporations able to take advantage of these trends. But it has devasted the working class: Wages have stagnated beginning in the 1970s.

A focus of my work, particularly my book, The Culture of Critique, is the rise of a new Jewish-dominated elite in America after a huge increase in the Jewish population resulting from immigration beginning in the late nineteenth century and continuing until immigration restriction was enacted in the 1920s. The Jewish rise to power and influence was gradual but even in 1911 Jewish activism was responsible for abrogating the U.S.-Russia trade agreement despite opposition from President Taft. By the 1920s Jews had developed important strongholds in the media (Hollywood, The New York Times, CBS, NBC) and in academia (particularly in departments of anthropology because of the influence of Franz Boas). Jewish influence increased markedly after World War II and anti-Semitism, which had been quite widespread in prior decades, declined dramatically.

However, the 1960s was a watershed decade that saw the eclipse of the previously dominant White Anglo-Saxon Protestant elite with its power emanating from Ivy League universities and dominating business and professional societies. As Eric Kaufmann noted,

By the 1960s, as if by magic, the centuries-old machinery of WASP America began to stall like the spacecraft of Martian invaders in the contemporary hit film, War of the Worlds. In 1960, the first non-Protestant president was elected. In 1965, the national origins quota regime for immigration was replaced by a “color-blind” system. Meanwhile, Anglo-Protestants faded from the class photos of the economic, political, and cultural elite—their numbers declining rapidly, year upon year, in the universities, boardrooms, cabinets, courts, and legislatures. At the mass level, the cords holding Anglo-Protestant Americans together began to unwind as secular associations and mainline churches lost millions of members while the first truly national, non-WASP cultural icons appeared.[1]

As Kaufmann notes, a key piece of legislation during the 1960s was the immigration law of 1965 that ended the national origins bias of U.S. immigration law that had favored northwest Europe. In retrospect this law should be seen as a sort of coming out party for the new Jewish elite. Culture of Critique documents the role of Jewish activism in bringing about this sea change in American immigration policy. While the law did not immediately alter the demographic balance of the country, it did open the door, and in the ensuing decades activists, and, in particular, Jewish organizations, continued to press for greater numbers, with the result that the white population has declined from around 90 percent in the 1950s to less than 65 percent today. These non-White immigrants and their children vote overwhelmingly for the Democratic Party which has championed immigration in recent years to the point that there is a very real possibility of one-party rule by a decidedly left-wing party. Democrat presidential candidates called for an end to border enforcement, abolishing the Immigration and Customs enforcement, and making all immigrants—legal or illegal—eligible for medical care, voting rights, and driver’s licenses. Any calls to limit immigration are greeted with cries of “racism,” and attributions of Nazism are common. Publius documents the continuing Jewish influence on immigration policy throughout, the interlocking network of NGOs, activists, media owners and producers, and wealthy donors.

With all that as background, Publius details the incredibly elaborate and incredibly well-funded pro-immigration infrastructure in the present. Immigration advocacy organizations are funded by a class of wealthy capitalists. For example,

Pueblo Sin Fronteras is just one of a huge number of NGOs that are part of the vast refugee resettlement network. This network has virtually unlimited resources and is backed by some of the world’s wealthiest individuals, not to mention multi-national corporations, banks, private equity firms, and national governments. Their synergy has produced the terrible globalist monstrosity known as “neo-liberalism” confronting us today.

He then describes how Pueblo Sin Fronteras is connected to a whole host of other non-profits and to donors like George Soros. And of course, Soros supports a wide range of leftist activist organizations and politicians. The districts of politicians who are not completely on board with the immigration agenda are pinpointed for refugee resettlement. These are overwhelmingly white districts. The point is to destroy white enclaves and the high-trust societies that developed in traditional America.

Publius does an excellent job describing the costs of this onslaught. Crime: Somalis “are almost solely responsible—along with the Congolese—for all of the crime in the city” of Portland. There are also huge costs for welfare benefits and public housing, which push up property taxes. Public housing is stretched to the point that there is an increase in homelessness for native Mainers, “yet the political class has prioritized the comfort of these migrants who have the backing of the entire globalist establishment.” Most remain unemployed or in low-wage, part-time unskilled labor.  Academic achievement is predictably poor. Thus Maine is importing an underclass, but it’s an underclass that will reliably vote for liberal politicians and provide cheap labor for Maine’s businesses. All of this is justified by corrupt politicians bought and paid for by powerful economic and diversity-related interests who intone about Maine’s “values”—the moral imperative that justifies this assault on the traditional population of Maine. Needless to say, these same processes are at work throughout the rest of the U.S.

The Way Life Should Be provides a highly detailed picture of what is going on in Maine. It’s really a reference source for those wishing to understand the interlocking, lavishly funded infrastructure that is destroying America. It’s conclusion is exactly right:

The many service providers and NGOs described in this book are absolutely essential to the vast matrix of “philanthropic capitalism,” and it should be abundantly clear by now that all of these organizations from the “charitable” to the state- and corporate-sponsored are inter-connected and their machinery is geared toward first splintering and then eradicating the native populations of the Western world, indeed all unique races, ethnicities, and cultures under the heel of the neo-liberal oligarchy. Understanding these mechanisms is absolutely essential in counter-acting the Establishment’s destructive agenda.