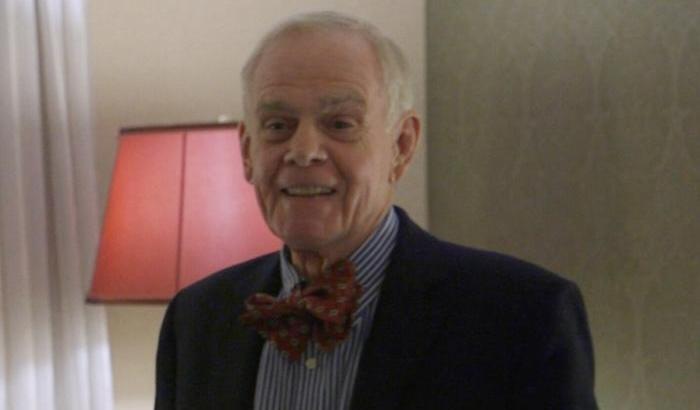 Bill Regnery died on July 2 of this year at the age of 80. He was a morally upright man, proud of his family with its long history of involvement in conservative politics going back to his grandfather, who was a founding member of the America First Committee that attempted to keep America out of World War II and whose spokesman was Charles Lindbergh. Lindbergh was seen as an anti-Semite for (truthfully) calling attention to Jewish involvement in promoting the war and for noting Jewish influence on the media, most famously in a speech on September 11, 1941 (discussed here, p. viii ff). I never discussed with Bill how his forebears viewed Jewish influence, but Bill was definitely aware of its importance in understanding politics and culture in America.

Perhaps his most lasting contribution was founding in 2001 the Charles Martel Society, named after the Frankish king who defeated a Muslim army at the Battle of Tours in 732, likely saving Western civilization and its unique genetic and cultural profile. The name of the society is a good indication of Bill’s attitudes on the central issue of preserving the West. The CMS has never shied away from discussing Jewish influence, and Bill was a regular attendee and sometime speaker at their annual conferences, until attendance became impossible because of declining health. I thoroughly enjoyed our conversations at these meetings. He was very intelligent, well read, and deeply committed to the cause of preserving White America and the West in general.

The CMS is the publisher of The Occidental Quarterly: Western Perspectives on Man, Culture, and Politics, which I edit. The journal is now in its twentieth year of continuous publication of scholarly articles. The best way to honor Bill’s memory would be to subscribe to TOQ if you haven’t already. It comes as no surprise that TOQ has been de-platformed from credit card processing, which has resulted in problems with recurrent subscriptions. But we are absolutely determined to keep TOQ going. It’s the least we can do for Bill and for the cause generally.

Bill’s passing makes us once again aware of the importance of money in activism of any kind. Perhaps the biggest problem we have is that the mega-rich billionaires are mainly on the left, with some few on the mainstream (worthless, often counter-productive) conservative right. The political contributions of the very wealthy Jewish community are legendary, and none will ever go to the causes Bill supported. Bill understood the importance of money in creating a movement, and he did what he could. One can only hope that someone will step up into the vacuum created by his passing.

On July 17, James Edwards devoted an hour of his regular Saturday night Political Cesspool program to remembering Bill, along with Sam Dickson, Jared Taylor, and me. It’s well worth listening to.

Bill’s last bit of writing appeared on TOO on August 30, 2020. He was already in declining health — I guess we all knew it wouldn’t be long. He did all he could do for the cause—which we should all hope is said about each of us after we die. He will be missed.

In 1946 Winston Churchill delivered a speech at a small college in Fulton Missouri that offered this prescient analysis: “From Stettin in the Baltic to Trieste in the Adriatic an ‘iron curtain’ has descended across the continent.” This Soviet invasion made a prison out of the entire area for half a century. Dissenters were severely punished.

Without notice or debate, a similar regimen of speech control is descending on North America, from Bar Harbor, Maine on the Bay of Fundy to Nome, Alaska on the Arctic Ocean, and south to the Rio Grande and the Straits of Florida.

Political correctness, a phrase used almost playfully in the 1990s, has morphed into the viciousness and moral smugness of our current cancel culture, replacing the spirit of the First Amendment. By way of example, I offer the following observation from an early victim of cancel culture, my friend the late Sam Francis.

“The civilization that we as whites created in Europe and America could not have developed apart from the genetic endowments of the creating people, nor is there any reason to believe that the civilization can be successfully transmitted to a different people.”

Comments like this led to Francis being fired from his position as columnist for the Washington Times in 1995 and put him into media purgatory and economic distress until his premature death 10 years later.

Sam’s proposition makes no moral distinctions and is not much more than a paean to what in reality is his extended family. In the same context the creating people of Great Zimbabwe were Bantus, the creating people of China were Han, and the creating people of the Inca Empire were Quechuas. If, instead of making a claim about the racial origins of Europe and America, Sam had instead substituted any of these other peoples into his statement, it would have been equally plausible but would not have resulted in Sam’s discharge.

The frenzy to stigmatize any mention of genetics especially as playing a role in the development of White civilization began early in the twentieth century, essentially eradicating what had been a robust intellectual exchange based on the reality of race and the idea that there are important racial differences in behavior around the world. This anti-biologism came to dominate academic thinking after World War II and has become a bedrock attitude among those who are now labeled progressives. Such thinking is woven into contemporary intellectual tapestry; it is taught throughout the school system from elementary school through the university, and it characterizes  entire mainstream media landscape. Among its White adherents, it has assumed a millenarian vision of a utopian future free from all racial conflict—the same sort of millenarianism that has characterized the moral crusades of the past, from the Civil War to World War II, to our contemporary regime-change wars in the Middle East.

Susan Sontag proclaimed “The white race is the cancer of human history.” If we limit her universe to the U.S., I’d say that she was about 40% right as this was the Hillary Clinton fraction of the White vote in the 2016 presidential election. This means that the remaining 60% of White voters represent our side of the family—at least potentially.

One birthday short of becoming an octogenarian, I charge the dissident right with the mission to  begin the intergenerational process of founding an independent political jurisdiction in which anti-millenarian whites can gather, regroup and flourish. Along the way we will support other races with  the same aspiration.

To this end,  we must extract our side of the family from the embrace of the “White millenarians” who are yet intent on imposing their heretical notion of equality on Earth as it art in Heaven —even though the misery from such tampering with human nature abounds in history and has been particularly evident in the recent past.

Our goal must be a Bohemian Divorce of mutual self determination as deliberate and bloodless as the split between the Czech Republic and Slovakia in 1993. To this end there is long standing precedent which stretches back to the founding of the Republic when separation was recognized as a humane means  of resolving ethnic and racial conflicts and sovereign tracts of land were ceded to indigenes.

Once separation is established, the internal political arrangements are less important than the maintenance of a unifying ethos by enforcing a variant of the Amish practice of Rumpspringa. This exercise encourages youthful apostates to leave the commonwealth before achieving citizenship.  So that a mistake of inclusion is not immutable, I recommend making exile a part of the criminal and civil code, directed at those who are in fundamental disagreement with the ideal of a separate White community. Such a provision could also be used to correct immigration blunders.

We have entered very dangerous times for Whites in America. The  summer riots of 2020 carried out with the blessing of much of the Establishment and the entire left is a clear indication that the American racial experiment is careening toward disaster. Whites need a separate political jurisdiction.

William H. Regnery II is the founder of the Charles Martel Society.