Does Clown World issue secret (and separate) awards for Jewiest Jew and Polymorphousest Pervert? If so, then I think one man may well have been bagging both awards for years: the polymorphous Israeli pervert Jonathan Yaniv (born 1986/7), who came to the fascinated and disgusted attention of millions of people around the world when he sued female beauticians in Canada for refusing to wax his testicles.

I’m sorry: that should be “her testicles.” Indeed, it should be “her lesbian testicles.” Yaniv claimed to be transgender and in mainstream modern leftism that claim instantly converted him into a completely authentic woman, despite the male genitalia he still possessed. It also lifted him to the top of the leftist tree. Although leftists say they believe in equality, in fact they operate a strict hierarchy of victimhood that grants victim-groups, like Blacks or gays or women, special privilege and power over villain-groups, like Whites or straights or men. As I pointed out in “Power to the Perverts,” under normal circumstances Black lesbians are as far above straight White men in the leftist hierarchy as a bar-headed goose flying over Mt Everest, at 29,000 feet above sea-level, is above a sea-cucumber grubbing in the slime at the bottom of the Marianas Trench, at 36,000 feet below sea-level. But some straight White male perverts came up with a clever way of subverting the leftist hierarchy and turning leftism against itself. These perverts have a sexual fetish known as autogynephilia, in which they fantasize about being women, wearing women’s clothes, and entering all-female spaces like dressing-rooms and toilets. 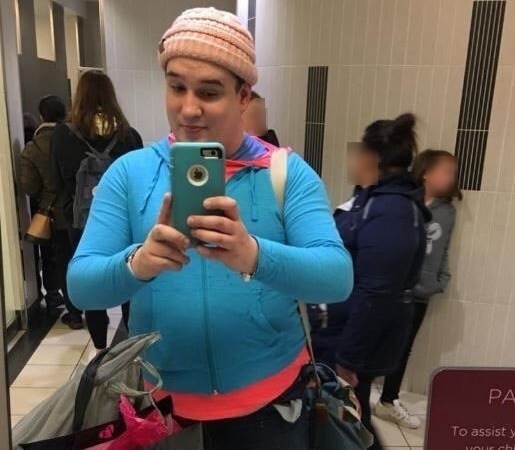 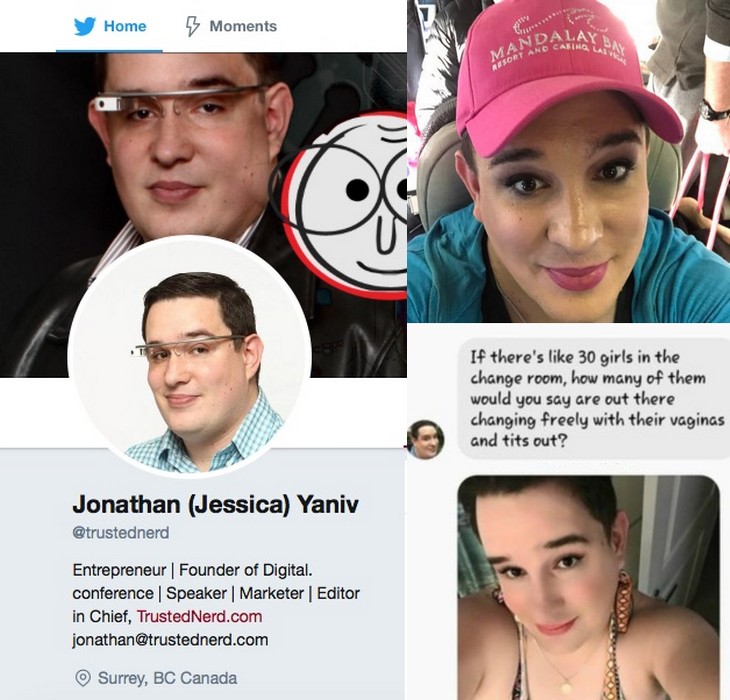 “Who is Jessica Yaniv Simpson?” A fascinating question answered at MeowMix.org

But if they’d been honest and told leftists that they were straight White men with a sexual fetish, they would have sunk even lower in the leftist hierarchy. Instead, the perverts cleverly aligned themselves with the sanctified lesbian-and-gay community. They weren’t straight White men with a fetish, not at all. No, they were a persecuted and misunderstood sexual minority – the most persecuted and misunderstood of all. Et voilà! By calling themselves “transgender,” the straight White men were able to leap above Black lesbians in the leftist hierarchy. In Britain, a Black-Jewish lesbian feminist called Linda Bellos (born 1950) didn’t get rapt attention when she pointed out what the straight White male perverts were up to. She didn’t get instant obedience when she said that they shouldn’t be allowed to invade female territory. On the contrary, she was called a bigot and a hater for denying that these straight White men were both fully authentic women and fully authentic lesbians. As I said at the Occidental Observer back in 2019:

[Bellos] isn’t superior to all stale pale males. Some of them are armed with a superpower that allows them to bound above Bellos in the victimhood hierarchy. Astonishingly, they’ve managed to brand Bellos as a hater from whom they need protection. Just let that sink in: some stale pale males have successfully claimed to be the victims of an elderly Black-Jewish lesbian. In 2017 they got Bellos banned from making a speech to a feminist society at Cambridge University, one of England’s biggest cult-centres of minority worship. Even more impressively, they set the police on her the following year: she was “interviewed under caution” after being accused of committing a hate-crime against them. (“Power to the Perverts,” The Occidental Observer, 6th March 2019)

Bellos is a TERF, a Trans-Exclusionary Radical Feminist, and in mainstream leftism that’s a very bad thing to be. The TERF wars are about territory and who can legitimately maintain borders against whom. Whites can’t maintain literal or cultural borders against Blacks, because Whites are lower in the leftist hierarchy than Blacks. And so Blacks can take any White role in acting, but Whites are now banned from taking any Black role. Similarly, women can take on male roles, but men are banned from taking female roles – unless those men claim to be “transgender.” However, by denying that men can become women, lesbian TERFs like Bellos haven’t embraced biological realism. They’re still leftists and they still believe in hierarchy, not in reality. They just want to keep lesbians like themselves higher in the hierarchy than straight men and don’t want to accept such concepts as “the female penis” and “lesbian testicles.” Alas for Bellos, boring lesbians like her aren’t entertaining like exhibitionist trannies, as I pointed out in “Dykes Are Dull.” That’s part of why trannies have been winning the TERF wars.

A persecuted and misunderstood trans-lesbian

But Jonathan Yaniv didn’t win his legal war on the female cosmeticians who refused to wax his “lesbian testicles.” Instead, he was utterly defeated (see the Wikipedia article for “Jessica Yaniv”). After that, you might have expected him to retire instantly and entirely from public life, particularly when you look at what was exposed to a world-wide audience about his polymorphous perversions. From pedophilia to tampon-fetishism, Yaniv could keep a large team of psychiatrists busy for years trying to turn him from a predatory pervert into a productive member of society. But I don’t think the psychiatrists would ever succeed. Yaniv doesn’t seem capable of embarrassment or self-reform. “Shame” isn’t a concept that he recognizes. No matter how badly he misbehaves and no matter how many court-cases he loses, he still sees himself as the victim and fights on against the bigots and haters who refuse to accept that he is a persecuted and misunderstood trans-lesbian with “special needs.” He’s now had “bottom surgery,” lost his lesbian testicles, and is working for a “Gender Studies Masters” at Simon Fraster University (SFU) in Canada. There’s an entire website, MeowMix.org, dedicated to recording his misbehavior, cataloguing his perversions, and predicting his eventual incarceration. Yaniv plows on regardless, a “proud lesbian” in a cruel world.

But amid all the commentary on and condemnation of Yaniv, one central and highly significant fact has generally been overlooked. Yaniv is an Israeli Jew. He looks like a Jew and has what sounds like an Israeli accent. MeowMix.org claims that “Yaniv was raised Jewish,” says that “the whole family emigrated from Israel”, and has documented how his mother, Miriam Yaniv (née Miriam Altman, born 1954), tried to destroy proof of her Jewish ancestry on an “Israeli family history site.” Like his mother, he has a Jewish forename and, like the Israel singer Idan Yaniv (born 1986), he has a Hebrew surname that means “he will prosper.” Yaniv also behaves like a quintessential Jewish stereotype, with a mixture of brazen perversity, unblushing shamelessness, and self-righteous aggression. Indeed, Yaniv seems to provide a paradigmatic example of three of the most important background traits for Jewish activism identified by Kevin MacDonald: intelligence, aggressiveness, and psychological intensity. But the most common claim about Yaniv’s race is that he is “white.” This would normally be called Jewish erasure, because ignorant people are erasing someone’s precious and unique Jewish identity. In Yaniv’s case, other Jews have not been anxious to claim him as one of their own. It’s another example of Jews as Schrödinger’s Tribe, switching between a Jewish identity and a generic White identity according to whatever best suits Jewish interests.

Plainly, it doesn’t suit Jewish interests for Jonathan Yaniv to be identified as a Jew. However, it does suit the interests of truth and science. Most or even all of the commentary on Yaniv loses its salience when he is correctly recognized as a Jew. By White standards, his psychology is indeed warped and his behavior is indeed obnoxious. But White standards don’t apply to him, because he isn’t White. Yaniv’s White critics, like the Canadian feminist Meghan Murphy, have tried to shame or ridicule him as though he were susceptible to genetically mediated techniques of social control developed by Whites amongst themselves. But he isn’t susceptible, because he isn’t White. He’s not simply Jewish but Israeli Jewish, the product of a majority-Jewish culture where White standards don’t apply. For example, why is Yaniv shameless? Well, you can’t embarrass an Israeli.

And why is Yaniv such a polymorphous pervert? That is surely related to the higher rate of psychopathology found among Ashkenazi Jews, as described by the Danish researcher Emil O. W. Kirkegaard in a recent paper called “A theory of Ashkenazi genius: intelligence and mental illness.” Kirkegaard argues that the contributions of Ashkenazim to cognitively demanding fields are even greater than one would expect from their higher average IQ. The extra factor, in his opinion, is the higher rate of Ashkenazi psychopathology, which facilitates their ability to generate new ideas and make unexpected connections. Meanwhile, their higher intelligence mitigates the severity of the symptoms and behavior they exhibit, and allows them to remain productive. It’s an interesting theory, but, as is characteristic of Kirkegaard, it assumes a more positive view of Jewish contributions to intellectual life than I think is warranted by the facts. Marx, Freud and Boas surely count as “Jewish geniuses,” but they have harmed the cause of true science rather than advanced it.

Other Jewish geniuses have been central to the creation and promotion of the translunatic cult, as described by Scott Howard in The Transgender-Industrial Complex (2020). Jonathan Yaniv is not a genius, but he has been diagnosed with “depression, anxiety, and attention-deficit hyperactivity disorder.” And the outsize disruption he has caused, as a single Jewish individual in a gentile society, is a clear example of how the West would be better off without Jews and their genius. We don’t live in a more beautiful and truthful world thanks to Jews. On the contrary, we live in a much uglier and much more mendacious one. In his uniquely repulsive way, the Jewish trans-pedo and tampon-fetishist Jonathan Yaniv is just as much proof of that as the Jewish Marx, Freud and Boas.