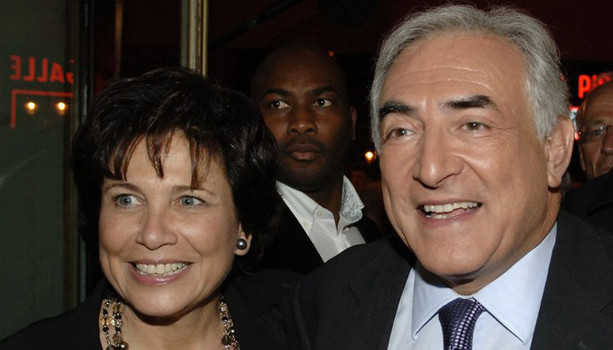 Many MSM accounts in describing Dominique Strauss-Kahn’s wife have stressed her birth in New York and her Scottish surname. In fact, Anne Sinclair was born Anne-Elise Schwartz to wholly French and wholly Jewish parents who were in America for business reasons. She was also born to considerable wealth.

She is granddaughter of legendary art dealer Paul Rosenberg, who…opened an art gallery in Paris in 1911, followed by another in London in 1935. Faced with the Nazi occupation of France, the Jewish dealer fled to New York in 1940 and opened another gallery. His daughter, Micheline, and her husband, Joseph-Robert Schwartz, also came to New York, where Anne was born in 1948. (Her father changed the family’s surname to Sinclair in 1949.)…

Anne Sinclair was the only heir of her mother, who died in 2006, and the art collection that she inherited has been estimated to be worth several tens of millions of euros.

Meet Anne Sinclair, the Art-World Scion by Dominique Strauss-Kahn’s Side By Kate Deimling ARTINFO May 20, 2011

Anne Sinclair, who unlike DSK has never married a non-Jew, is however, like some American Jews, very willing to use her money for ethnic political objectives

Sinclair …insisted on a Jewish ceremony after the legal exchange of vows in a Paris city hall.

…she was the driving force behind Strauss-Kahn’s political ambitions, and her wealth…helped finance a group of political advisers, media aides and internet sites that were preparing the ground for what was soon supposed to be a triumphant return to France for Strauss-Kahn, to begin a race for the presidency many thought he would win.

”She always wanted to prove that, 75 years after Leon Blum, the French were capable of electing a Jew,” a friend told Le Monde. ”In her eyes, that would be a formidable revenge on history.”

Another revenge on history she supports is Obama’s Immigration policy, as Steve Sailer has recently noted in Mrs DSK’s Last Blog Post: On Immigration

Barack Obama…denounced the racism-tainted arguments used by the opposition, which take advantage of the challenging economic environment, the fear of unemployment and the foreigner…

How kind of this rich Frenchwoman, insulated by her wealth from all the consequences! This is pure MacDonald of course.

Also pure MacDonald is the reflexive support Strauss-Kahn has received from prominent French Jews, often in coarse terms, as lovingly chronicled by the blog GalliaWatch in “He Only Lifted Her Skirt“. I see our friend Bernard-Henri Levy was even given space by The Daily Beast to defend Strauss-Kahn, earning a round denunciation from The Huffington Post Dominique Strauss-Kahn Defended Witlessly By Bernard-Henri Levy And Ben Stein Jason Linkins 5/18/11

Like the Madoff Affair, this is going to be very informative.