Well, I’m waiting. I’m waiting for something to wake up White people all over the world, especially in America. I’ve thought before there was enough out there to do the job, but people’s survival instincts have yet to kick in. And now we have the Trayvon Martin-George Zimmerman affair.

I really thought this anti-White media propaganda campaign was a no-brainer, but my brother surprised me by piping up about how terrible it was that a White guy had shot this innocent black boy in cold blood. In other words, my brother had swallowed the media line hook, line and sinker.

What is so discouraging about this is that I’ve kept him informed over the years about racial realism and the real state of crime in America. Further, I’ve situated it in the context of a “culture of critique” explanation showing how ethnic warfare on Whites is being carried out in education, the government, courts, and most explicitly in the mass media.

This time I gently tried to tell him that Zimmerman was (half) Hispanic and the facts were far from all in. My brother wrote back, “Are you sticking up for the shooter?”

I replied, “I’m not sticking up for the shooter at all.  In fact, I haven’t even thought about him or the dead guy.  America is a violent country, along with many other parts of the world, and killing is the norm. Among the various killings in America on a given day, this one seems garden variety, just two dudes getting in a fight.”

I’ve learned over the years not to lecture on these topics, but in this instance I indulged myself. My letter continued:

But what have you heard about Chicago last weekend?  Here’s what went on [I was writing on March 28th; I’ve also added links]:

At least 10 people were killed, including a 6-year-old girl, in shootings over the weekend in Chicago. The slain were among at least 49 people wounded in shootings from 5 p.m. Friday to 6 a.m. Monday, according to information compiled by the Chicago Tribune.

Or what about in San Francisco:

A 35-year-old Vietnam citizen now faces murder charges in the deaths of five people whose bodies were found Friday in what police initially thought was a murder-suicide.

Those are pretty spectacular but the national press is not yet breaking a sweat over them.  Don’t expect a Hollywood movie about this stuff either.

[BTW, I can now add yet another instance of  the “Immigrant Mass Murder Syndrome” in America, this one in Oakland on April 2nd. “A gunman opened fire Monday at a Christian university in California, killing at least seven people, wounding three more and setting off an intense, chaotic manhunt that ended with his capture at a nearby shopping center, authorities said.”

So how did the liberal media headline this? The Washington Post said: “7 dead, 3 injured in shooting attack at Calif. Christian university; suspect detained.” Those oh-so-objective folks at NPR wrote: 7 Dead In Shooting At Christian University In Oakland. Yes, the school is Christian, but it is also well-known for being Korean. Wouldn’t that be the more informative adjective for the headlines?]

Returning to my letter to my brother:

In addition to those murders, you’ve probably got dozens of other more typical ones. Another day in the life of America (or Brazil or Nigeria or Mexico, etc.)

So why did the mass media suddenly latch on to this case?  And why have they been pushing it so hard?  And why are they basically lying about so many details? Why did Obama’s handlers have him say what he did?  When have you heard him talk about Asian victims or child victims, let alone plain old White victims?

I guess because I’ve taught this stuff for 14 years now, I tend to take it seriously. And what I’ve found is that you can’t understand what’s going on unless you understand Jewish power in the media. The Tribe is leading all this and they damn well are doing it for a reason. Consider that not only will we read about it hundreds of times in the big newspapers, we’ll hear Bill Maher going on about it, Jon Stewart (Leibowitz) going on about it, right on down to the liberal reporters from towns near you and me.

The Tribe will of course weave this into Hollywood fare to make for a consistent message: “Whites” victimize innocent minorities all the time, past, present and future. For instance, don’t you just love how Hollywood has Don Johnson’s character in Machete shooting an innocent, pregnant Mexican woman? You know, just sport for the average White guy.

Of course the reality has been entirely the opposite for decades.

Here’s a statistic that has always impressed me. In any given year, the FBI counts about 30,000 black on White rapes. Yes, THIRTY thousand.  That’s not far from a hundred a day. Black men raping White women. A fact. [See The Color of Crime: Race, Crime and Justice in America, which concludes: “Of the approximately 1,700,000 interracial crimes of violence involving blacks and Whites, 90 percent are committed by blacks against Whites. Blacks are therefore up to 250 times more likely to do criminal violence to Whites than the reverse.”]

Now here are two still shots from the 1996 film A Time to Kill, by Jewish director Joel Schumacher. Note carefully all the props: 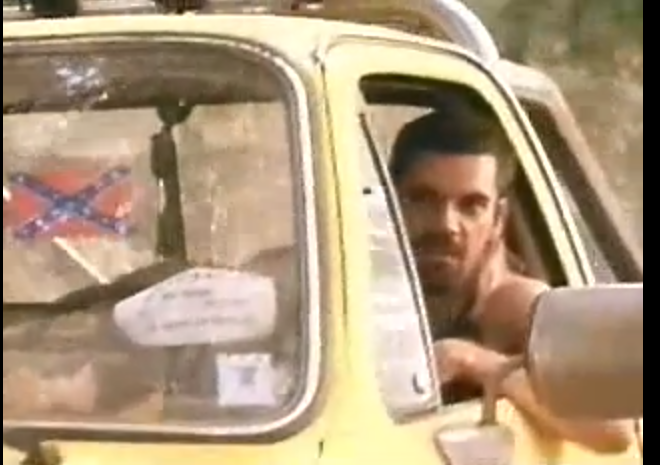 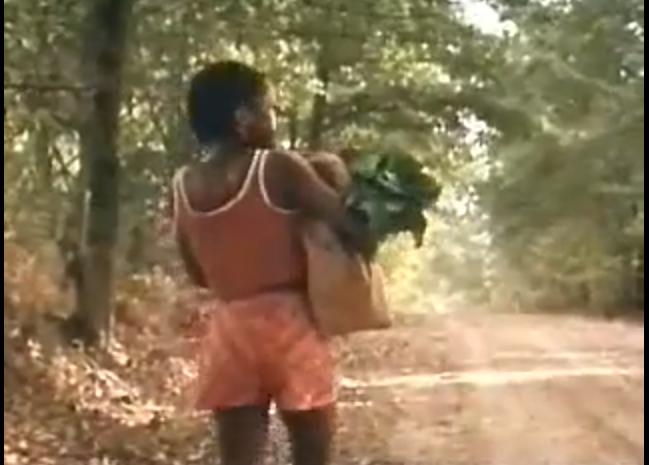 So what do you think happened in this scene?  Here’s a 30-second clip: httpv://www.youtube.com/watch?v=PgbJFv5sIKM

Well, the filthy Southern rednecks beat and rape this 10-year-old girl. Then they lynch her.

This sort of thing happens non-stop, from Hollywood to the New York Times to late night TV shows.  . . . a consistent drum beat, spun just the way they want it, even if it’s all a lie.

But in mass society, the mass media message wins every time.  They didn’t spend a trillion dollars to monopolize the world’s mass media for no reason.

Here’s another example. A few years ago, a Black nurse was high on drugs and hit a homeless White man while she was driving. The poor guy who got stuck in the window was very much alive, yet the woman drove on home and parked in her garage. She continued getting high and having sex with her boyfriend over the next few days, occasionally checking on the honkey in the window.

Finally, he died, and she and her boyfriend dumped the body.

Hollywood picked up on this story (Jewish director, of course).  Who did they cast in the role for the nurse?  Mena Suvari: 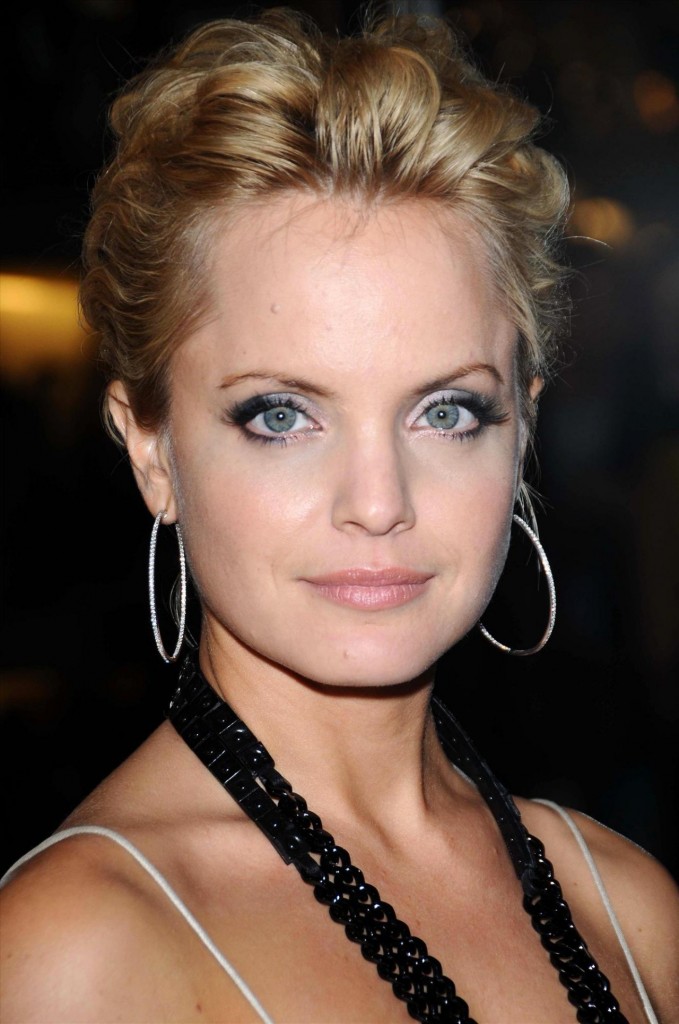 Anyway, no sense going on. I expect the mass media, government, legal and education systems, etc. to continue this propaganda because they have a goal and are working toward it relentlessly.

I just wonder, though, when a sense of self-preservation will kick in among more Whites, Whites who are actually the victims most of the time . . . and are getting duped by the institutions I just mentioned.

It will be interesting to see how this Trayvon Martin case plays out.

The Trayvon Martin shooting case may be the worst example of media duplicity in history—at least for media that is not explicitly fictional. We know that NBC, MSNBC and the New York Times altered the 911 call by Zimmerman to make it sound like Zimmerman was focusing on Martin’s race. ABC took 5 days to release an enlargement of a photo showing a very large gash on Zimmerman’s head “after releasing the same video without enhancement and a headline that declared: ‘Trayvon Martin Video Shows No Blood or Bruises on George Zimmerman.’” CNN backpedaled after assuring its audience that Zimmerman had uttered a racial slur (in fact, he said ‘cold’, not ‘coon’). And then there’s the New York Times writer taken to task by Bill O’Reilly for claiming that Zimmerman killed Martin “in cold blood.”

And while the media continues to spin its lies, John Dergyshire just got fired from National Review for writing common sense on race. Self-policing by the “conservative” media.

How far will this obvious media slandering of Whites go toward waking up more Whites to their perilous situation? I’ve covered this question in my “What will it take?” essays (see also here). Kevin MacDonald appears optimistic, writing “I suspect that people like Hannity realize that their mainly White audience is fed up with the ‘Whites victimizing Blacks mantra’—a good example of appealing to implicit Whiteness.”

I hope he’s right, but we all know it’s a long road between implicit Whiteness and explicit Whiteness. The day implicit Whiteness becomes explicit is the day I’ll dance a radiant Irish jig. Somehow, however, I don’t think the Trayvon Martin-George Zimmerman Affair is enough to trigger it. I guess Whites need far more pain first.