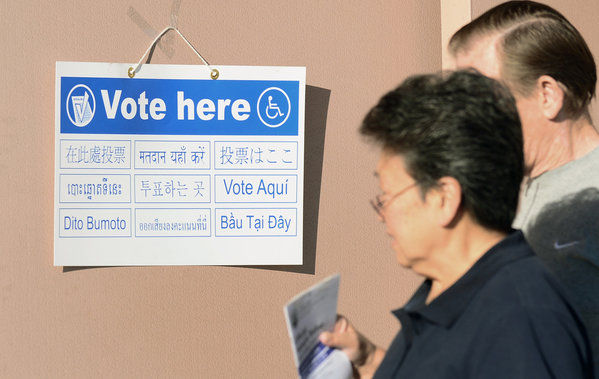 Voting sign in LA County. Notice the prominence given to the English version, obviously a residue of America’s racist past.

An op-ed today’s LATimes argues that Asians have signed on in overwhelming numbers to the non-White coalition that has become dominant in the Democratic Party. Based on their experience studying the Asian American community, two political scientists, Taeku Lee and Karthick Ramakrishnan, claim that the main reasons that Asians voted overwhelmingly for Obama have to do with seeing the Republican Party as too concerned with limiting immigration and too much associated with Christianity (Asian Americans turn Democratic).

The 73% of Asians voting for Obama was indeed remarkable—higher than Latinos (71%) or Jews (~70). Given their income profile, Asians are voting much more like Jews who, as the old saw goes, vote like Puerto Ricans but earn like Episcopalians. The point here is that their motives for doing so are similar to those of Jews—a lack of identification with the traditional people and culture of America (although doubtless with far less fear and loathing than is typical of Jews).

Since 2000, the Republican Party has moved more sharply to the right than the Democratic Party has to the left, especially on issues that resonate with Asian Americans. For example, Republicans in Congress escalated their heated rhetoric on immigration and, despite the Bush administration’s efforts, consistently scuttled efforts toward comprehensive immigration reform.

[During the Obama Administration,] the Republican Party has not been helped by its close liaison with the tea party movement, which received low favorability ratings in our 2012 survey, nor by presidential candidates and party activists emphasizing Christian values. Thus a Pew report on Asian American religion showed the highest Democratic Party support among Hindus and the religiously unaffiliated who, together, account for more than 35% of the Asian American population.

Taeku and Ramakrishnan also mention Obamacare and ending the war in Iraq as issues that helped Obama with Asians. But the bottom line is clear:

If Republicans …  are able to project a more inclusive image of the party on immigration and religious diversity, they can hope to reverse their steep descent among Asian American voters.

So, once again, the Republican Party is encouraged to abandon any allegiance to the interests of its White base. Implicitly, Whites are urged to give up any attitude that immigration should be limited—Whites should have no concern about their displacement and should get on board with transforming the country away from its historical people and culture as soon as possible by admitting even more non-White immigrants.

Whites should have no concern about the eclipse of the implicit and often explicit understanding that America is a Christian culture. All those tea partiers and their concern that America retain its Christian heritage must simply change their attitudes in order to be acceptable to Asians (and Jews).

Once again we see that multiculturalism has resulted in the racialization of American politics. Utterly predictable. And of course, the standard line is that it’s all the fault of those evil, racist Whites—despite the fact that Whites are the least racialized of any racial group. On average, 80% of non-Whites voted Democrat, while a bit over 60% of Whites voted Republican. But the drumbeat message is that the White base of the Republican Party must change; they must become loyal foot soldiers in the program that is displacing them and making them politically irrelevant.

Whites are clearly becoming racialized—despite the fact that working class and middle class Whites were forced to  choose between  Obama as multicultural icon  and a plutocratic, elitist Republican who did not represent their economic interests.

White the Republicans are urged to become more like the Democrats, the Democrats have firmly embraced what used to be considered the agenda of the far left. Ronald Brownstein notes

Above all, this was a year when it became clear that, in a time of hurtling change, the two parties now represent a Coalition of Transformation and a Coalition of Restoration. In terms of shaping the Democrats’ long-term trajectory, by far the most important decisions Obama made this year were to dive into the powerful cultural and demographic currents transforming the American landscape. Previously, many party leaders have qualified (or entirely withheld) their support from causes such as gay marriage or legalizing undocumented immigrants, for fear of alienating culturally conservative whites. Obama this year embraced both without qualification; then, for good measure, he accepted a collision with the GOP and the Catholic Church (over the availability of free contraception under health care reform) that crystallized contrasting attitudes about the role of women. Obama, beginning an overdue rebalancing in federal spending, even shifted resources from seniors to the much more racially diverse working-age population by funding health coverage for the uninsured partly through savings in Medicare.

On the Republican side there is an explicitly White take-home message.

This election more clearly stamped the Republicans as a Coalition of Restoration, overwhelmingly dependent on the votes of whites unsettled by those changes. After Obama’s victory, conservative grandees such as Rush Limbaugh and Bill O’Reilly portrayed the election as something like the Alamo, with true Americans overrun by hordes of benefit-grubbing minorities and young people …

[There is] a widespread fear among the Right that a heavily nonwhite class of “takers” will vote itself ever-expanding benefits at the expense of mostly white “makers.” …

These comments reveal a profound sense of demographic retreat on the Right that makes explicit the sub rosa implications of the tea party’s 2010 cry to “take back our country.” To the extent that longing means restoring the political dominance of married, churchgoing white families, the most important message of 2012 is that those days are gone. As if with a cannon burst, this election announced the arrival of a reconfigured America. Led by Romney, many in the GOP have responded by raging against it.

Needless to say, Brownstein is among those counseling the Republicans to give up their White base and get with the program:

It’s just a guess, but responding to the needs of this emerging Next America might prove a more profitable long-term strategy.

The dilemma for the Republicans is how to get a 2016 presidential candidate who is on board with the program of the displacement of White America. The Republican elites have repeatedly shown  they will do anything to cling to power a bit longer. But the base is angry indeed. The base rightly sees the situation as approaching Armageddon—the last chance to restore something like the America they grew up in. If such a candidate emerges, they will stay home in droves (as many did this year), angered by whoever wins.

And if, despite all the efforts of Republican elites, a White populist Republican candidate emerges  but loses to the non-White coalition, they will finally realize that drastic measures must be taken if they are to restore their country.

It’s when Whites realize that they can’t win any more that the tensions will explode. Their country has been taken away from them. Who can blame them?