The Hobbit is a bit long, and some of the scenes could have been edited down. But I am not really complaining. It held my interest. The only thing is that it has a sort of “one thing after another for no good reason” feel—the result of a lot of padding needed to make a trilogy of movies out of a short novel. But when you look at the garbage put out by Hollywood, The Hobbit is certainly most welcome.

There are a lot of good things here. You have to marvel at the 3-D magic and computer graphics, especially in the fighting and chase scenes. Of course, I am relatively unjaded when it comes to computer graphics in movies because I am rarely inspired to enter the enemy-controlled territory of the local cinema.

There are some really beautiful scenes set in the forests, fields, and mountains of New Zealand. The scene with Gollum and Bilbo Baggins, set in an underground lake, is hauntingly beautiful—with rocky crags and still, dark waters, illuminated as if by the moon.

And I always resonate to the shire, even though we get to experience it only at the beginning. The rounded doorways, arches and windows, with houses partly underground and grass growing on the roof. Nothing ostentatious. The interior woodwork is stunning, beautifully carved and fitting precisely—the work of master carpenters using very fine wood. Indeed, excellent workmanship is apparent everywhere—in the ways that foods are wrapped, the beautifully formed cheeses, the jars of preserves, the loaves of bread. These are people who know how to make a comfortable, happy life for themselves without working too hard, and being satisfied with what they have. 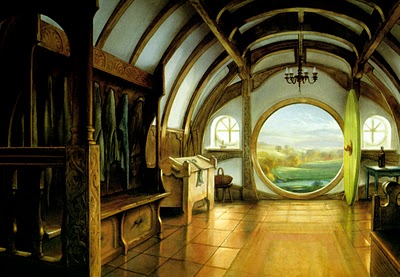 Interior of a hobbit house

The Hobbits are an image of softness, of childlike innocence and just plain niceness—the actors obviously chosen to appear as child-like adults, forever young, their features rounded. Like teenage boys, they have no facial hair. Even in his old age, Bilbo looks like an aged teenager. It is because of this niceness, of course, that the Hobbits may be trusted with the ring, whereas the others would easily corrupted.

Beginning with the Lord of the Rings trilogy, the shire has always struck me as a depiction of primitive Europeans, an egalitarian hunter-gatherer society, turned agricultural and settled down (see here, Discussion section, p. 13ff). A depiction of life before the aristocratic comitatus, with its predatory warrior bands, before kings and princes.

The egalitarianism is apparent. No one is really above anyone else; leadership is consensual, never despotic. And there is camaraderie, apparent in the friendly farewells given as Bilbo leaves on his great adventure. The Hobbits genuinely like each other and care for each other. And, as Bilbo says, he belongs there. He belongs with his books, reading and writing, having just enough to live comfortably. Not needing or wanting more, but understandably upset when the dwarfs devour his well-stocked larder.

Some of the hippies I knew back on the ’60s were like that. I think that some consciously aspired to being Hobbits, as Tolkien was very much in vogue. Attracted to a simple life of camaraderie, close to nature, without ambition or arrogance. They tried and some succeeded in making a living by honing a craft like woodworking, pottery, jewelry making or music. Last time I went to Berkeley you could still see them on Telegraph Ave. near the University of California campus. Like the Hobbits, in the real world they can only thrive in a sheltered environment where evil is held at bay by less innocent creatures. One might even go so far as to say that a big problem many Whites have is that we have too much of the hobbit in us. We desire an innocent, empathic, socially bonded, egalitarian world living among like-minded people, but we don’t realize that means that we have to be tough enough to make such a world—a tall order when we are dominated by people intent on importing as many anti-hobbits as possible.

At the emotional heart of the movie is the theme of dispossession. The dwarfs are out to reclaim their land—a theme that may subconsciously resonate with White audiences seeing their country and culture in the process of being taken from them.

Unlike the Hobbits, the dwarfs are fallen creatures. A dragon stole their land because they had hoarded gold—a tempting target for any dragon. But we don’t see the dragon (we get a glimpse at the very end). And in any case, a completely non-human monster as the villain is not as compelling as evil humans or human-like creatures. Here was see hordes of disgustingly ugly, violent orcs and three very large trolls. These creatures are the opposite of the hobbits—physically repulsive, brutal to every other creature, including each other. No empathy for anything. Just primitive uncontrolled animal cravings. One can only imagine what their sexual behavior would be like if Tolkien had written females into their character. The place where the orcs live (one doesn’t know what to call it) is jerry-built, completely without any sense of aesthetics, and without craftsmanship or planning. It exudes architectural ugliness.

The orcs are ruled by a very large despot who is probably the most physically disgusting creature ever imagined in the cinema. The obvious despotism would be quite foreign to the egalitarian hobbits, but it is also quite different from the dwarfs where Thorin, the leader, is courageous, fearless, and a true leader of men. He is physically good-looking, and he has royal blood—the rightful heir of his dispossessed and corrupted grandfather. But he does not lead because of his lineage; his group of dwarfs is a classic Germanic comitatus where he must earn the allegiance and loyalty of his followers because of his personal traits. 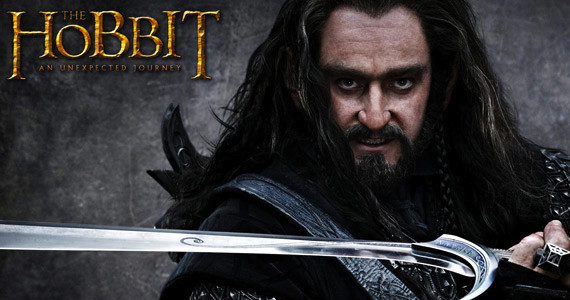 Here was have the makings of a prototypically Western aristocratic society—one based on qualities like courage and leadership needed to survive and prosper in a world where evil has triumphed, at least temporarily. We get a few glimpses of the architecture and sculpture of a bygone heroic age, now lying in semi-ruins, reminiscent of the Argonath in Lord of the Rings (see below). One doubts that the hobbits would be much of a match for the orcs, trolls and evil wizards who populate Middle Earth. The dwarfs can put up a good fight, even if in the end they need the magic of Gandalf to pull them out of the tightest spots. 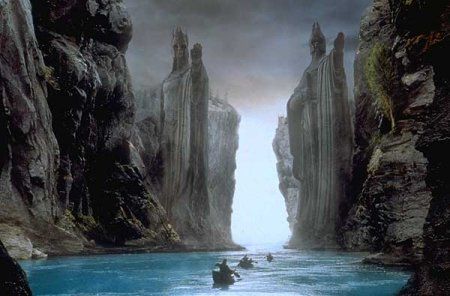 So we have good against evil, beauty against ugliness, rational control against mindless primitivism, empathy versus vicious exploitation and mindless violence, egalitarianism and aristocratic leadership versus brutal despotism.

Just as in the Lord of the Rings trilogy, there is not much doubt about which side to root for. But there is a rather glaring difference. In LOTR, most of the Orcs are clearly and egregiously dark-skinned, so much so that the films seemed to many viewers as also presenting a contrast of white (= all things good) versus black (= all things bad). There was something of a moral panic because of its depictions of good White people trying to save themselves and their culture against the forces of darkness. For example, Stephen Shapiro:

“Tolkien’s good guys are white and the bad guys are black, slant-eyed, unattractive, inarticulate and a psychologically undeveloped horde.” … While Tolkien describes the Hobbits and Elves as amazingly white, ethnically pure clans, their antagonists, the Orcs, are a motley dark-skinned mass, akin to tribal Africans or aborigines. The recent films amplify a ‘fear of a black planet’ and exaggerate this difference by insisting on stark white-black colour codes, Dr Shapiro said.

This concern peaked with The Two Towers with its representation of the Haradrim as “garbed in turbans and flowing crimson robes. They ride giant elephants. They resemble nothing other than North African or Middle Eastern tribesmen” (“‘Lord’ of racism? Critics view trilogy as discriminatory”). There is a long line of critics of Tolkien who see strong overtones of White racialism in his stories (see discussion here).  According to this site, this how orcs are presented in Tolkien:

Orcs appeared manlike (roughly) but looked repulsive. They were shorter in height than Men and Elves and bow-legged with long arms, dark skin, wide mouths with fangs, and slant eyes. Their blood is black. They are generally filthy and dirty.  Sunlight makes most Orcs uncomfortable.

Here are some typical bad guys from The Lord of the Rings: 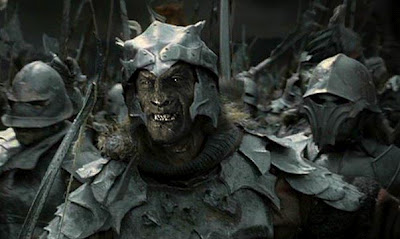 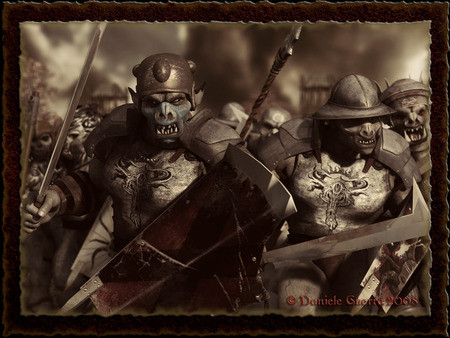 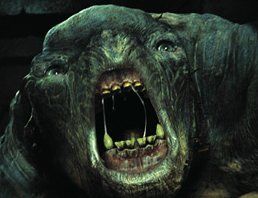 Cave Troll from Lord of the Rings

Well I am happy to report that The Hobbit avoids such unpleasantness by making all the bad guys light-skinned. They are just as physically repulsive and badly behaved as before, but now their skin is unmistakably white. Indeed, one of the chief bad guys is the “Pale Orc,” a very large specimen, with all of the ugly traits of that foul breed. Pale Orc has very light skin—even lighter than the rest of the orcs. 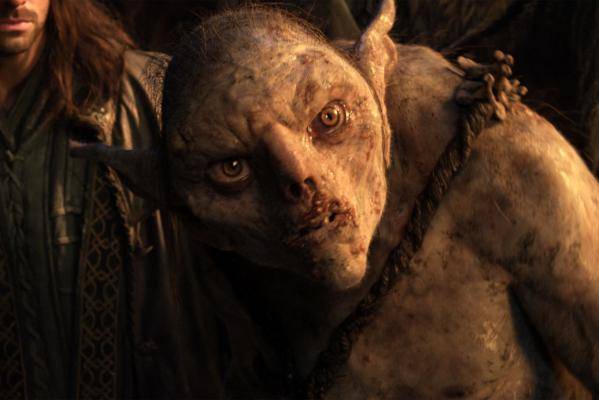 Light skinned orc from The Hobbit 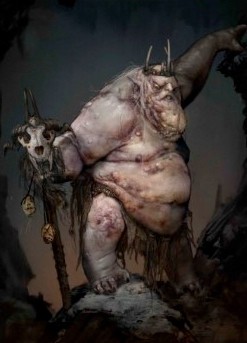 King of the Orcs in The Hobbit

Light-skinned trolls in The Hobbit

So Hollywood and the rest of our hostile elite will sleep well knowing that The Hobbit cannot be interpreted as a White versus Black allegory that touches all too close to home as the entire Western world is being inundated with invaders, many of them dark-skinned.