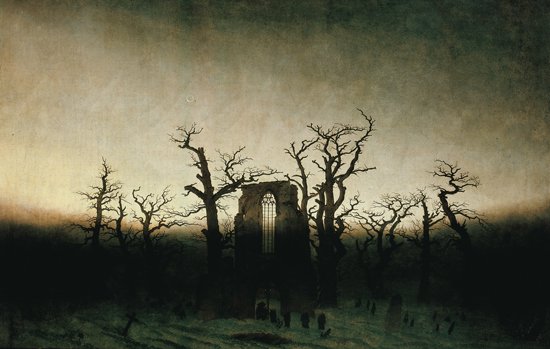 Caspar David Friederich “The Abbey in the Oakwood (oil), 1810

The end of the world has indeed happened. It did not happen on a specific day, but has spread out over several decades. The world that disappeared was a world where most children knew how to read and write. A world where we admired the heroes rather than the victims. A world where political machines had not turned into the soul grinding machines. A world where we had more role models than rights. A world where one could understand what Pascal had meant when he wrote that entertainments distracted us from living a real human life. A world where the borders safeguarded those who lived their way of life and a life of their own.

Yes, that world had its flaws and sometimes it was a horrible world, but the daily life of great many people was at least regulated by an array of meanings provided by the landmarks. By way of memories, that was a world still familiar to many of us. Some regret its passing. But that world will never come back.

The new world is liquid. Space and time have been abolished. Stripped of its traditional mediation the society has become more and more fluid and more and more segmented, which only facilitates its reification. One lives in it by way of “zapping.” With the virtual disappearance of major collective projects, which were once the carriers of different worldviews, the religion of Self — a Self based on the unrestricted freedom of narcissistic desire, a Self self-generated out of nothing — has resulted in the across the board deterritorialization, which goes now hand in hand with the dissolution of all the landmarks and all the references, thus making the individual more and more malleable, more conditionable, more and more vulnerable, and more and more nomadic. Under the cover of emancipatory “modernization,” “for more than half a century the ideological osmosis has been taking place between the financial right and the multicultural left” (Mathieu Bock-Côté), meshing economic liberalism with societal liberalism, the market system with the fringe elements of culture, all of it due primarily to the mercantile recycling of the ideology of desire and capitalizing on the breakdown of the traditional social forms. The overall objective is the elimination of communities of meanings that refuse to operate according to the logic of the market.

Meanwhile, some real anthropological transformations have taken place. They affect the relationship to our Self, the relationship to Other, the relationship to the body, the relationship to technology. Tomorrow these transformations could rush us forward to the planned merger of the electronics and man’s own living bodies. As soon as greed for profit becomes the sole motivation, at the expense of all others, its performative result is the generalization of the mercantile spirit, which in turn breaks down the citizenry into simple customers. Within this context, “political correctness” is not just a passing and funny fad, but a powerful means to transform the process of thoughts, restrict more and more the common space as a generator of reciprocal obligations, and make it impossible to retrieve the world of the meanings which has by now disappeared.

We are finally witnessing the implementation of “governance” — a sort of financial Caesarism which boils down to ruling over the peoples, while keeping them at bay. For its part, the therapeutical and managerial state, being the dispenser of social engineering and acting as the Grand Supervisor, is working on the removal of all barriers separating order from chaos. It asserts its power on the implementation of a perfectly deliberate sub-chaotic situation against the backdrop of its own rushing ahead toward nowhere, and along with generalized timelessness, thus creating a situation of a cold civil war. The sociology of victimhood dismisses the very notion of social class, inserting in its place the denunciation of “exclusion” and the “fight against discrimination,” as well as an economic “science” which conceives of the notion of categories of people as a residual category. At the same time, though, more than ever before, the class struggle happens to be in full gear.

In Europe, under the impact of the “austerity” policies, the process of sliding into recession, if not into depression, is taking place. Mass unemployment continues to grow, the dismantling of public services leads to the reduction of social goods, while the purchasing power keeps diminishing. One quarter of the European population (120 million people) is threatened today by poverty. In the past, revolutions took place for much lesser reason than that. Today, there is no such thing. Outsourcing, layoffs, industrial relocations, abusive job dismissals and the so-called “social restructurings” can certainly  trigger social protests — but nowhere near on the horizon is there any solidarity strike, let alone general strikes. The sole preoccupation to maintain one’s own job has no purpose other than its own. Why is the crisis being tolerated so passively? Are the nations so exhausted, so dazzled, so bewildered? Have they accepted the idea that there is no alternative? Nations live under the horizons of fatality. Everybody expects something to happen. But it won’t happen, because capitalism, in all objectivity, is reaching now its absolute historical limits.

We are experiencing a crisis of an absolutely unprecedented magnitude, affecting the capitalist system at a level of accumulation and productivity that has never been reached before. The crises of the nineteenth century could be overcome because Capital had not yet taken hold of the entire means of social reproduction. The crisis of 1929 was overcome due to Fordism, due to the Keynesian regulations, and because of the WWII. The current crisis, occurring now against the backdrop of the third industrial revolution, is a structural crisis, spearheaded by total empowerment of the financial markets over the real economy and plagued in addition by widespread public debt. One of its direct results is the yielding of political power to the representatives of Goldman Sachs and Lehman Brothers. But neither of these can solve the problem, because there is no such mechanism able to overcome the present crisis. Financial bubbles, state credit and money printing, that is to say, the creation of fictitious money-capital, can no longer solve the problem of the loss of the Capital substance. In the absence of real growth, and regardless whether one moves toward an uncontrollable inflation or toward a general public default payment, or whether one moves toward an uncontrollable inflation, the current solvency crisis (which is now  being treated as a liquidity crisis) —  all of this will end up in the earthquake.

In a time like ours there are four kinds of people. There are those who consciously wish to sink further and deeper into chaos and darkness. There are those who willingly or unwillingly, are always ready to endure anything. Then there are also rightwing dinosaurs around who live the present situation by way of lamenting. From whining to commemorations, they imagine they can bring back the old order, which explains why they constantly score defeats.

But there are also those who yearn for a new beginning. Those who live in the darkness, but are not of the darkness; i.e. those who strive to resurrect the light. Those who know that beyond the real, there is also the possible. They like to quote George Orwell: “In a time of universal deceit, telling the truth is a revolutionary act.”

Alain de Benoist (http://www.alaindebenoist.com/) is a philosopher. This editorial was first published in the quarterly Eléments (n°146, January –March 2013) under the title “La fin du monde a bien eu lieu.”