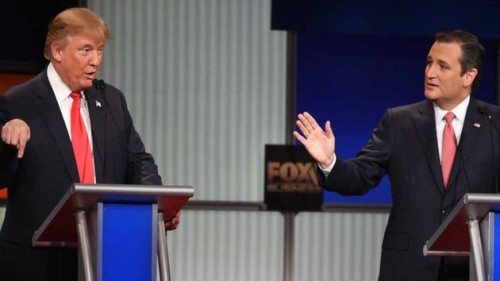 See also: Why So Much Jewish Fear and Loathing of Donald Trump?

Given New York is the deepest of blue states, Cruz was quite obviously insinuating liberalism. But commentators seized on it as veiled anti-Semitism e.g. By ‘New York values’ did Ted Cruz mean ‘Jewish’? by Mark Silk, Religion News Service, January 15, 2015.

As a child of the Heartland, I can testify that this interpretation simply didn’t occur to most Americans. And it’s particularly fantastic given that Cruz has assiduously courted the Israel Lobby, famously saying “those who hate Israel also hate America, that those who hate Jews also hate Christians, and that anyone who hates Israel and the Jewish people is not following the teachings of Christ” [Ted Cruz speech to Christian group cut short by boos after Israel comments, by Sean Sullivan, Washington Post, September 11, 2014].

But there’s a very low threshold for accusing someone of anti-Semitism.

Fortunately for Cruz, the anti-anti-Semites still have The Donald to kick around.

Indeed, we now have the anomalous situation where Trump is condemned by Jewish organizations for implicit anti-Semitism while also condemned for having the values of a typical New Yorker—liberal, and typical of the great majority of US Jews, wherever they live.

In my first report on Jewish reactions to the Trump phenomenon, I said:

The common denominator here is nothing less than that they see Trump as undermining the elite consensus on immigration … and, implicitly, on the moral imperative of euthanizing White America.

Well, even though that was only two months ago, events since then have only provided more support for the nexus between Jewish loathing of Trump and concern about Trump’s attitudes on immigration and multiculturalism—combined with a bit of neocon angst that he is insufficiently hostile to Russia and not on board with bombing Iran and deposing Assad in Syria.

The common denominator in many of the comments of Jewish organizations: hysteria about the singling out of a group. For example, Jeffrey Greenblatt of the ADL wailed “A plan that singles out Muslims and denies them entry to the U.S. based on their religion is deeply offensive and runs contrary to our nation’s deepest values” [What Jewish groups have (and haven’t) said about Donald Trump, by Uriel Hellman, Jewish Telegraphic Agency, December 13, 2015]

And it’s not just the US whose “deepest values” are violated. Israel, that “Light Unto the Nations” and pillar of multiculturalism, also repudiated Trump’s proposal. Israeli PM Netanyahu’s office released this statement:

Prime Minister Netanyahu rejects Donald Trump’s recent remarks about Muslims. … The State of Israel respects all religion and strictly adheres to the rights of all its citizens.

[Trump: ‘Inappropriate’ of Netanyahu to slam plan on US ban of Muslims, Jewish Telegraphic Agency, December 13, 2015]

Trump was fairly nonplussed about this, noting only that Netanyahu’s comments were “inappropriate.” But he seemed to be quite aware of the hypocrisy involved:

Hillary Clinton said that it is O.K. to ban Muslims from Israel by building a WALL, but not O.K. to do so in the U.S. We must be vigilant!

Of course, given that Israel is an avowedly Jewish state, Muslims are by definition second-class citizens, with very different rights under law, including especially immigration policy, which, of course, is (energetically) restricted to Jews.

So in unsurprising fact, Netanyahu and the Israeli government go far beyond Trump by discriminating against all groups except Jews. Nevertheless, and weirdly, an Israeli NGO is actively involved in recruiting invaders to Europe—needless to say, casting its motives as entirely idealistic and humanitarian.

But I can see why Jewish organizations are upset. Singling out a group because members of the group are more likely to commit terrorist acts immediately reminds Jews that anti-Jewish attitudes have often resulted from Jews actually being likely to have attitudes or behaviors that the majority finds objectionable.

In the Jewish community, we know all too well what can happen when a particular religious group is singled out for stereotyping and scapegoating.

This is likely a veiled reference to the common perception among Jews (which I think is correct) that, although the 1924 Immigration Restriction Act did not refer specifically to Jews, it was motivated in part by the perception that Jewish immigrants were far more likely to be politically radical and sympathetic to Communism—at a time when the horrors of Bolshevism loomed large in public perception.

This perception was firmly rooted in reality, and commonly acknowledged by Jews and non-Jews alike. Political radicalism was then entirely mainstream in the Jewish community. Jews often made up high percentages of members in the Communist Party USA (e.g. in Philadelphia were nearly three-fourths of the membership was composed the children of Jewish immigrants who had come to the United States in the late nineteenth and early twentieth century—here, p. 271).

In response, Jewish organizations went to great lengths to alter the public stereotype of Jewish disloyalty. Jewish publications warned that the Leftism of Jewish immigrants would lead to anti-Semitism. As often occurs now among American Muslim organizations, Jewish organizations in the 1920s engaged in what Sheldon Neuringer calls “a near-desperation . . . effort to portray the Jew as one hundred per cent American” by organizing highly visible patriotic pageants on national holidays and urging the immigrants to learn English.

In my view, it is entirely rational and legitimate for a country to be concerned about the personal characteristics of its immigrants, including those that, as with Muslims currently, might predispose them to terrorism—but also to hostility toward the White, Christian majority, low ability for academic achievement, proneness to crime, welfare use, or even voting Democrat.

And in the case of Jewish radical immigrants in the early 20thcentury, this is especially relevant in light of the subsequent rise to intellectual dominance of the intellectual Left as an elite hostile to the White, Christian majority—the Jewish role in which was fundamental, and forms the subject of my book The Culture of Critique.

Notice that the 1924 law did not explicitly prohibit Jewish immigration. They continued to emigrate from Western Europe—for example, all-American luminaries like Nightline’s Ted Koppel and his friend Henry Kissinger. But the law severely restricted immigration from Eastern Europe, where the bulk of the Jewish population lived.

Nevertheless, let’s “interrogate” (to use a word that’sfashionable on the left) the idea that denying entry to the U.S. to a particular ethnic or religious group “runs contrary to our nation’s deepest values,” as the ADL’s Greenblatt put it.

Baloney! These “deepest values” only became enshrined in law and elite attitudes with the passage of the Immigration and Nationality Act of 1965. That legislation repealed the national origins provisions of the 1924 law, which had attempted to create an ethnic status quo as of 1890 by placing quotas on immigration based on the representation in the U.S. population at that time.

Before the 1965 law, there were strong strains in U.S. immigration law that were entirely congruent with Israel’s current practice of fashioning immigration policy to benefit the majority—at times by excluding particular groups.

For example, the Naturalization Act of 1790 restricted immigration to “free white persons of good character.” Almost a century later, there was the Chinese Exclusion Act of 1882 that prohibited immigration of Chinese (and unanimously condemned by the Jewish press, as Sheldon Neuringer reports in American Jewry and United States Immigration Policy, p.165—also the case with later attempts to restrict immigration).

Then came the Gentlemen’s Agreement, an informal agreement with Japan in 1907 limiting immigration of Japanese workers, and finally the 1924 Immigration Restriction Act that favored northwest Europe, severely restricted the immigration of Africans and banned outright the immigration of Arabs and all Asians. The 1924 law was essentially reaffirmed in the 1952 immigration law, passed over President Truman’s veto.

And it should be remembered that the 1965 law was passed only because of the pretense that, as then freshman Senator Ted Kennedy famously promised, it would not change the ethnic balance of the country.

The 1965 law therefore cannot be read as an endorsement by the traditional American majority for a demographic transformation that will, if unchecked, soon make Whites a minority in the country that they established.

In fact, the “deepest values” attributed to the U.S. by ADL’s Greenblatt are recent creations, stemming entirely from the cultural revolution of the 1960s that reshaped elite culture in America. The 1965 law was fundamentally a project of the organized American Jewish community ( here, here, here ). And these “deepest values” are still not held by non-elite White America—given that Trump’s proposals on immigration are actually majority viewpoints in the U.S. [Are Trump’s immigration views out of the mainstream?,  by Byron York, Washington Examiner, August 16, 2015

Conservatism Inc. may argue that Trump is not a “conservative.” But the reality is that Trump voters are focusing on his big issues—immigration first and foremost.

Unless we win the immigration battle, none of the other battles can possibly be won.

I don’t care if @realDonaldTrump wants to perform abortions in White House after this immigration policy paper. http://t.co/l7nq8gN7i5

Kevin MacDonald [email him] is professor of psychology at California State University–Long Beach. His research has focused on developing evolutionary perspectives in developmental psychology, personality theory, Western culture, and ethnic relations (group evolutionary strategies). He edits and is a frequent contributor to The Occidental Observer andThe Occidental Quarterly. For his website, click here.