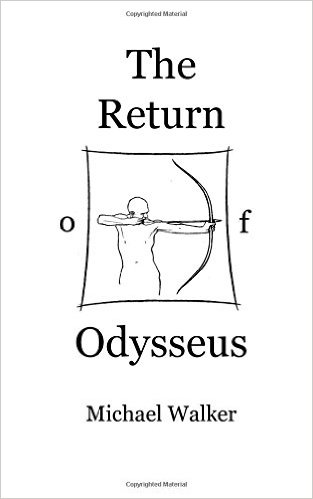 The Return of Odysseus
by Michael Walker

This is a well-written and highly readable play, and I got through it in a couple of normal working days. It tells the famous Homeric tale of the prolonged absence and final return of the eponymous Greek hero to his home island, and the resulting revenge he exacts on the unruly suitors of his wife, Penelope.

Author Michael Walker is well known in nationalist circles as the editor of Scorpion magazine, a publication which first began the not particularly easy task of introducing the ideas of the European New Right to an English-speaking audience back in the 1990s.

For this reason it a may be difficult to read this play as it should be read, namely as a purely “metapolitical” work, that is one in which the message is an indistinguishable part of the art. Instead, like me, you may feel a tendency to read it politically, and to interpret certain lines as referring to specific contemporary nationalist issues.

But while political consciousness and an awareness of the writer’s sympathies may detract from a perfect metapolitical reading, I have to say I rather enjoyed these “political flashes,” and many here will also enjoy them, I am sure.

For example, in Act Two, Scene Two, Mentor, a member of the Assembly of Ithaca, describes the sorry state that the island kingdom has fallen into since the monarch’s absence:

There is not one palace which is plundered, but the entire land. Ithaca is growing sick while the tapeworms of the market grow fat on a land for which they never fought, which they never tend and never loved. The homeland has almost as many immigrants as natives. No one respects the Ithacan customs. The children are hardened and use the lowest language of the streets. The public coffers are plundered by parasites and aliens. Money is made by distortion and usury. Honest work is badly paid. The richest men are middlemen and speculators. The labourer is poor. (p. 128)

Reading these words, it is not ancient Ithaca that rises before your mental eye, but modern Britain, or some other “enriched” part of the West. One is almost surprised not to find a reference to Muslim grooming gangs! But, then, a piece of rhetorical eloquence or a classical reference snaps you back to the ancient story world in which this is set, and, from a thinly disguised satire on our diseased modern times, the story assumes once again the elegance of timeless tragedy.

This alternation between the sublimity of heroic tragedy and the incisiveness of a satire on modern times weaves its way through the entire play. Besides Odysseus himself, who mainly stays on the heroic and classical side of things, the important characters are Telemachus, Odysseus’s son, and Antinous, the leader of the suitors. These two exist much more as modern types.

Telemachus has much of the “cuckservative” about him, being weak and morally imposed upon by the arrogant sophistry and chutzpah of the incomers and their supporters, of whom Antinous represents the type.

Many of Antinous’s lines would be at home in the mouth of the contemporary SJW you might encounter on social media, someone who dresses up his arguments with a distortion of the “founding principles,” while resorting to stigmatizing labels to stifle the concerns and arguments of his opponents.

“Thank the Gods that this indeed is a free country,” he says at one point to Halisthernes, a remnant of the old ruling class. “The overwhelming majority of free men find you, Halisthernes, and your little group of bigoted friends, repugnant and absurd. Repugnant because offensive to decent persons, absurd because [Odysseus] is not coming home, never. I say there will be no return. The old times are finished forever! There can be no second coming of the king.” (p.132)

You could almost throw a line in there about it being “the current year” — even if the current year, in this case, would be sometime in the twelfth century BC!

This synergy between current events and eternal issues also makes you wonder about the stylistic models of Walker’s play. Did the ancient Athenian playwrights, like Aeschylus, Sophocles, and Euripides, write lines that referenced their own city’s contemporary issues? No doubt they did, but in a suitably metapolitical way that now reads like poetry.

Walker has clearly been reading these writers, and his lines have a similar feel, sharing the short punchy sentences, pulsing rhythms, and repetition of ideas, clearly expressed, needed to drive the message home to a large and unruly audience. For this reason, there are clear affinities between drama and political speaking, and it seems that the rise of Greek drama certainly provided a spur to the rise and development of schools of rhetoric aimed at swaying the democratic mob in places like Athens.

But ultimately this play is about the sophistry and deceptiveness of words, and how they facilitate injustices and corruption that can only be corrected by radical action.

The central motif implicit in the story is that of presumption — first in presuming Odysseus’s death, and secondly in the presumption of the weak and unworthy on the prerogatives of those whom they arrogantly and unjustly seek to replace.

Walker skilfully shows us how this presumption is dressed up in plausible sounding words, and how injustice prolonged in this way leads to dramatic violence in the same way that the longer a bow is drawn back the greater the force is that it finally unleashes.

It is these themes of presumption and punishment, eternal in their relevance, that also resonate strongly with our own times, with events like Cologne, where arrogant and ungrateful newcomers have treated European women in a worse way than the suitors of Penelope were hoping to treat her.

The presumption of the suitors is brought to a hubristic pitch by Walker in the last scene. Here they are hoping to finally break down Penelope’s resistance, only to be met with her enraged husband in a scene of violent “uncucking.” The arrogant Antinous’s fatal and ironic final words on being warned of danger are:

After which he is immediately shot by Odysseus with a bow and arrow, just like the animal he unwittingly claimed to be.

In the cultural and political battle to preserve White European civilization, we will ultimately be forced to dig very deep into our collective myths and history for the strength and wisdom to survive. It is good to see that in Michael Walker’s play, this process has already begun.