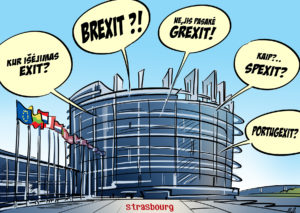 Brexit has come and gone, and like Wellington said of the Battle of Waterloo it was a “damn close run thing.” Indeed, that was one of the reasons I supported Scottish independence two years ago — to stop Scotland dragging England to the left on important issues like this. (My other reason was so that Scotland could discover on its own — and rather painfully I suspect — the limits of leftism when not buttressed by a larger non-socialist entity).

But what about the fallout from Brexit and its effect on British nationalism? Yes, it gets us out of the EU and shakes the foundations of the still incomplete Tower of Babel. But what lessons can we learn from it, and what directions should nationalists take?

Perhaps the most interesting point about the Brexit Referendum is the political vacuum it revealed. All the main parties, except UKIP, officially backed the defeated cause. That’s right — the Conservative Party, Labour Party, and Lib Dems, as well as the SNP and Plaid Cymru, supported REMAIN. But, even with a higher turnout than in a general election, they failed to get their way.

What does this mean? It means that practically the entire British political establishment was not aligned with the wishes of the majority of the British voting public.

You could say that it was only one issue, but it was a very big issue. Also you wouldn’t have to dig too deep to find other issues. Off the top of my head, I can see the masses having quite different views from the political elites on immigration, the death penalty, gay marriage, education, foreign aid, interventionist wars in the Middle East, and British identity.

Brexit reveals the enormous gap that has developed between the parties and the people. Not only that, but the referendum actually widened it because the one party of importance that was aligned with the wishes of the British people — UKIP — has now lost its main reason for existing, namely the UK’s independence from Europe. This is its own fault for being a nationalist party in denial, and using the EU as a convenient whipping boy for an extremely soft-focus form of implicit British nationalism that it will now struggle to harness.

Could UKIP deal with this new political reality by swinging towards real ethno-nationalism? Possibly, but I think it is highly unlikely. For so long the party has been working too hard to offset hysterical leftist accusations of “racism” that its guns — like Singapore’s in 1942 — are all pointed the wrong way.

It is far more likely to tack back to its neo-liberal roots or make a stab at appealing to working class Labour voters. The first option would deprive it of an electoral base as few voters are attracted to neo-liberal ideas, while the second would make it into an inauthentic copy of old Labour c. 1950s. Because of its diverse and eclectic membership, it could well move in both directions, in which case it would probably become confused, divided, and implode .

In my view this means that a major area is about to open up on the nationalist end of the political spectrum for a party that can package itself as more clearly nationalistic than UKIP, while finding issues beyond leaving Europe. There are several small parties that could fit that role — Britain First, the British Democrats, and LibertyGB spring to mind as possible contenders.

It is notable that Jack Buckby of LibertyGB is being particularly proactive along these lines, by standing for the seat vacated by the death of Jo Cox, who, before her violent death, was a typical member of our political elites, more concerned about internationalist agendas than problems on her own doorstep, like the existence of Muslim rape gangs.

Until the various splinter groups of British nationalism can successfully unite in one larger group, all British nationalists must try to avoid petty conflicts and support each other wherever they can. This goes for Buckby’s campaign in the Batley and Spen constituency.

Regardless of any reservations that some British nationalists may have about Buckby or LibertyGB, a good result for Buckby in this by-election would boost the general nationalist cause. Also, a glass-half-full attitude like this will provide the groundwork for greater unification efforts, because, with the awkward situation that UKIP now find themselves in, the time is clearly ripe for the rise of a strong nationalist party that can exploit the massive disconnect between the British political establishment and the British people.

In order to do this effectively, additional issues beyond Brexit must be identified and agreed on. These issues should (a) have popular appeal, (b) not be seen as being too “cruel,” and (c) be issues which the political elite and the old parties find difficult to exploit. There are several issues that fit this category. Here are a few that spring to mind, some of them obvious, some less so:

James Lawrence also offers an interesting idea in his recent article, “You’re Next,” suggesting that the break-up of the UK into its constituent nations could help push politics away from transnational elements and ideals towards more identitarian ones, which is yet another reason I supported Scottish independence two years ago.

Even if Scottish — and therefore English — independence is kept off the table, a similar effect could be achieved by campaigning for an English parliament within the UK.

If the Brexit vote proved one thing more than any other, it was the degree to which the political establishment is out of step with the North of England, which we should always remember was the one area to vote for two BNP members of the European Parliament. Because of the evident alienation of the North, any English parliament should of course not be based in London like the Westminster Parliament, but rather in a Northern city.

But while Nationalists consider what issues to follow up Brexit with, they must be careful to avoid issues that strongly appeal to them but which the mass of the people are less ready to follow. I would include the following:

While these are essentially good policies, they are also problematic. Repatriation could occur sometime in the future, but it has a strong connotation of racial purism that many ordinary Britons would find disturbing, and which could be used to revive Nazi comparisons. Associating this too closely with less problematic issues, like a ban on further immigration and repatriating illegal immigrants, might drag those issues down with it.

Banning Islam has an obvious appeal, but it also cuts across British values of religious freedom. Better to chip away at Islam, or only attack it directly in the wake of a particularly bad terrorist atrocity, when public support would be much more likely.

Repealing gay marriage is not a suitable issue, as it has all the characteristics of a distraction — plenty of sound and fury but very little actual effect, as the numbers of gays who wish to marry are an infinitesimal minority of the population.