All good-thinking leftists in Britain simultaneously love non-White immigration and hate Nigel Farage. This is entirely logical, because Farage is the hate-filled bigot who exploited White racism and xenophobia to win the Brexit Referendum back in 2016.

As part of his successful campaign, Farage unveiled a “vile anti-immigration poster” called “Breaking Point,” which showed a caravan of dark-skinned refugees pouring into Europe. The poster was truly horrific: rather than portray refugees as weeping women and traumatized children, it resorted to brazen and unblushing realism. The refugees were portrayed as overwhelmingly young and healthy men of prime crime-committing and rape-gang-forming age. Appalled leftists promptly reported the poster to the police, claiming that “it incite[d] racial hatred and breache[d] UK race laws.” 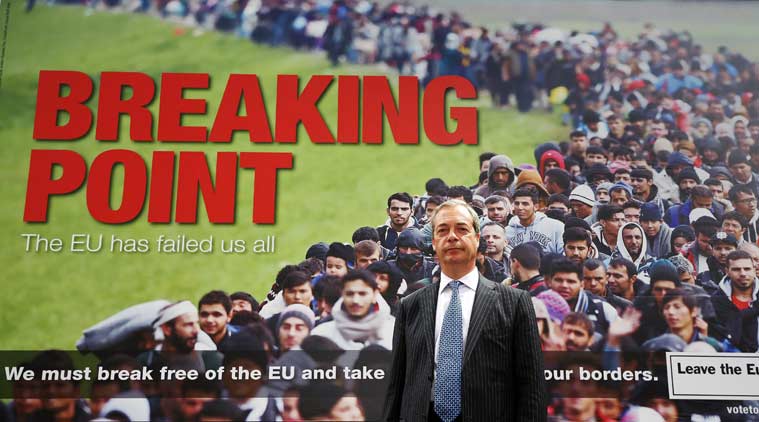 But although Farage’s campaign was successful and 17·4 million Brits voted for Brexit, the traditional rules of British democracy immediately re-asserted themselves. The elite in Britain do not want Brexit and have been thwarting it with bureaucratic delay and legalistic legerdemain ever since. For example, John Bercow, the arrogant and obnoxious Jewish Speaker of the House of Commons, has been working hard to “kill off Brexit” using fast talking and arcane parliamentary procedures. The same rules of elite control apply on mass immigration: it was never voted for and the majority of British Whites have always opposed it. But the elite wanted it and so it happened regardless. Brexit was, in part, a vote against mass immigration and the destruction of Britain’s White Christian traditions and history. That’s why the elite hate Brexit and want to stop it.

But it looks as though the elite are soon going to be badly stung again. Nigel Farage’s new Brexit Party has a jaw-dropping lead in opinion polls for the European elections on May 23rd. If the polls are right, the hate-filled bigot Farage and his allies will ride another wave of racism and xenophobia to victory, crushing both Labour and the Conservatives en route.

But here’s a funny thing. Three of the candidates for Farage’s party, Claire Fox, James Heartfield and Alka Sehgal Cuthbert, don’t simply believe in mass immigration. They support completely open borders, without controls of any kind on an influx of unlimited numbers of people from any and all countries on earth. This is because Fox, Heartfield and Cuthbert are part of a “weird [Trotskyist] sect” once called the Revolutionary Communist Party (RCP). 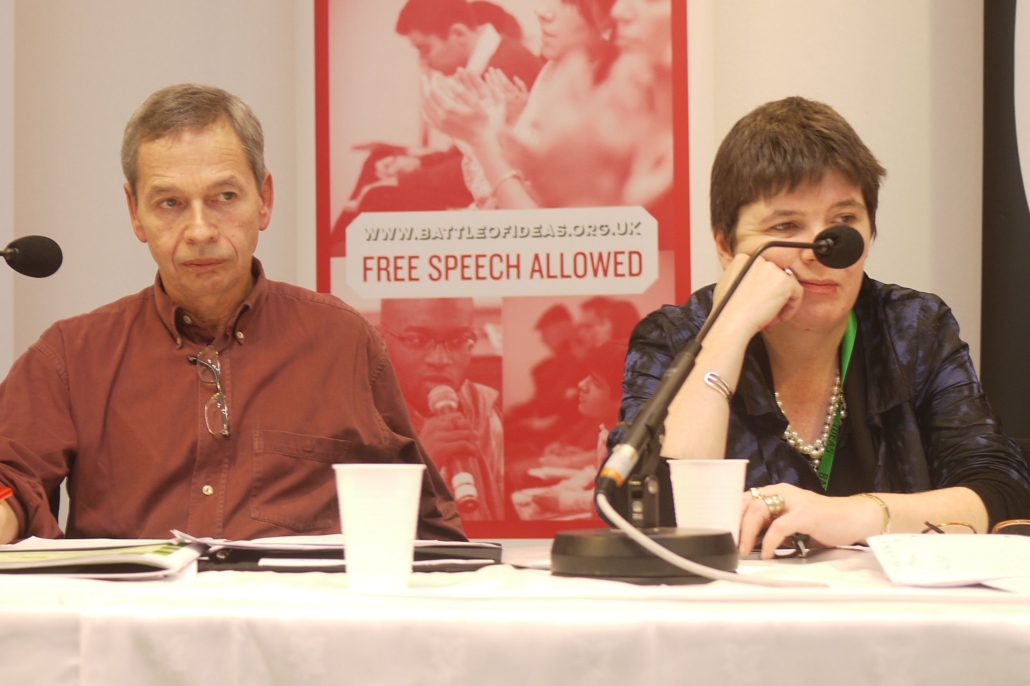 Under the guidance of their Hungarian-Jewish guru, a sociologist called Frank Furedi, the RCP and its later mutations have campaigned tirelessly for the greatest possible liberty of the greatest possible number. But their passionate belief in liberty and human possibility has had a very strange effect on their psychology. All members of Furedi’s Cult — let’s call it “FuCu” — believe in exactly the same things and express their opinions in exactly the same way. In effect, FuCu is a political hive buzzing on a single note dictated by the bee-keeper Frank Furedi. And FuCu have always buzzed loudly in support of open borders. During the so-called migrant crisis of 2015, Furedi’s disciples issued a simple message of “Let them in: We shouldn’t demonise or infantilise African migrants. We should welcome them.” FuCu went on:

We shouldn’t pity these migrants; we should admire them, for using guile, gumption and perseverance to come here. They’re precisely the kind of people sluggish Europe needs more of, an antidote to our students who can’t even clap without having a mental breakdown and our new generation who think that being told to ‘get on your bike’ to look for a job is tantamount to abuse. Let’s relax the borders and let them in to try their luck in our countries and see how they fare. If we do that, we’ll put the traffickers out of business, end the deaths in the Mediterranean, and, more importantly, do our part to enable the aspirations of human beings who have committed no crime other than wanting to realise their potential in our towns, our cities, alongside us. (Let Them In, Spiked Online, 21st April 2015)

That article ran in Spiked Online, an internet magazine where FuCu argue tirelessly in favour of both unlimited immigration and unlimited free speech. Of course, mass immigration by clannish and highly illiberal Muslims and other non-Whites is very bad for free speech, but this contradiction doesn’t bother FuCu. Trotskyists don’t believe in logic or objective reality but in whatever advances the cause of Trotskyism and their own power. After the Charlie Hebdo massacre, FuCu argued that the real problem was the attitudes of White liberals, not the illiberalism of Muslims. We must be strong in asserting Enlightenment Values, you see, and then Muslims will put down their machine-guns and pick up libertarian treatises by John Stuart Mill and Voltaire.

Whites need to lead the way

This need for guidance by Whites also applies to identity politics, in FuCu’s opinion. Yes, Western society is riven by racial antagonism, censorship and tribal thinking. But this is not because millions of tribalistic and censorship-friendly non-Whites have flooded across the borders. Not at all! It’s because Whites have not asserted Enlightenment Values loudly enough. Non-Whites are longing to embrace free speech and merit-based competition, if only they knew it. Alas, we Whites haven’t told them what they really want, so they demand censorship and special treatment instead. If you want to understand FuCu’s ideas, the Polish philosopher Leszek Kołakowski summarized them perfectly in his magisterial Main Currents of Marxism (1978): “The cultural atmosphere of Russia in those years [of the Revolution] had an adolescent quality, common to all periods of revolution: the belief that life is just beginning, that the future is unlimited, and that mankind is no longer bound by the shackles of history.”

Kołakowski also explains why FuCu, who are still convinced admirers of the totalitarian Lenin and Trotsky, argue so loudly in favour of unlimited freedom, which is not something that Lenin and Trotsky ever granted to those over whom they won power. In accordance with orthodox Leninism, FuCu support anything that disrupts and disturbs the current system:

Lenin laid the foundation for the tactics which were soon to become binding on Communist parties: the right course was to support any movement tending to overthrow the system at any point, for any reasons and in the interests of any class: liberation in colonial countries, national or peasant movements, bourgeois national uprisings against the big imperialists. This was a generalization of the tactics he had been preaching in Russia for years: to support all claims and all movements against the Tsarist autocracy, so as to exploit their sources of energy and seize power at the critical moment. The victory of the Marxist party was the final aim … (Main Currents of Marxism, Vol. II, pp. 471-2)

Communist parties need to act like that because they can’t win power by truly democratic means. In the 1980s, FuCu ran a conference called “Preparing for Power.” They were about to stand for election as the Revolutionary Communist Party, you see, and were confident that the British people would be eager to embrace an openly Trotskyist party. Of course, they received almost no votes in the parliamentary elections that followed and thereby learned a valuable lesson: “Do not seek power under your true colours.”

The Furedi Cult is again preparing for power

Decades on, it looks as though three members of FuCu are going to follow that principle to victory in the European elections. The convinced Trotskyists Claire Fox, James Heartfield and Alka Sehgal Cuthbert, all of whom support open borders and unlimited non-White immigration, will be sent to the European Parliament by ordinary British Whites who oppose mass immigration and want Britain to stop turning into a Third-World country. Anti-Farage leftists like Nick Cohen are now writing exposés of Fox et al, pointing out that they have supported IRA bombing campaigns and opposed controls on child pornography.

I don’t think those exposés will stop Fox et al winning seats in the European parliament. But Cohen isn’t exposing FuCu as supporters of unlimited immigration. After all, Cohen and other leftists believe in that themselves. Does Nigel Farage believe in it? I don’t think so, which makes it difficult to understand why he’s allowed FuCu to practise entryism on his Brexit Party. Furedi and his hive don’t condemn the European Union for allowing so many Muslims and other non-Whites into Europe. Instead, they condemn the EU for creating “Fortress Europe,” which is a lying propaganda term used by the far left to demand open borders.

Claire Fox and her comrades in FuCu are not what they pretend to be. They claim to support unlimited freedom while really pursuing unlimited power for themselves. Another great writer who helps us to understand FuCu and its ideology is George Orwell. In Nineteen Eighty-Four, he satirized the way leftist organizations proclaim one thing in their names while pursuing the exact opposite by their deeds: “The Ministry of Peace concerns itself with war, the Ministry of Truth with lies, the Ministry of Love with torture and the Ministry of Plenty with starvation.”

I therefore christen FuCu the Ministry of Liberty. It claims to believe in the maximum possible freedom. In fact, it believes in the maximum possible disruption, because it hopes to win power through chaos. I don’t think it will win the power it seeks, but I trust Frank Furedi as far as I could throw The Collected Works of Lenin (all forty-five volumes of them). Fortunately, I think Farage is much cleverer than Furedi. Then again, I don’t trust Farage either. The sight of an open-borders Trotskyist cult entering the European parliament with the votes of anti-immigration Whites is going to be an interesting one. Watch this space.