Having grounded ourselves in the history of Russia’s Jewish Question, it is now time for us to turn our attention to the anti-Jewish riots of the 1880s. The following essay will first provide the reader with the standard narrative of these events advanced by Jewish contemporaries and the majority of Jewish historians — a narrative which has overwhelmingly prevailed in the public consciousness. The latter half of the essay will be devoted to dissecting one aspect of the Jewish narrative, and explaining how events really transpired. Other aspects of the Jewish narrative will be examined in later entries in this series. While a work like this can come in for heavy criticism from certain sections of the population who may denounce it as ‘revisionist,’ I can only say that ‘revisionism’ should be at the heart of every historical work. If we blindly accept the stories that are passed down to us, we are liable to fall victim to what amounts to little more than a glorified game of Chinese whispers. And, if we taboo the right of the historian to reinterpret history in light of new research and new discoveries, then we have become far removed from anything resembling true  scholarship.

In 1881 the ‘Russo-Jewish Committee,’ (RJC) an arm of Britain’s Jewish elite, mass-produced a pamphlet entitled “The Persecution of the Jews in Russia,” and began disseminating it through the press, the churches, and numerous other channels. By 1899, it was embellished and published as a short book, and today digitized copies are freely available online.[1] By the early 20th century, the pamphlet had even spawned a four-page journal called Darkest Russia – A Weekly Record of the Struggle for Freedom, ensuring that the average British citizen did not go long without being reminded of the ‘horrors’ facing Russian Jews.[2] The fact that these publications were mass produced should provide an indication as to their purpose: It is clear that these publications represented one of the most ambitious propaganda campaign in Jewish history, and combined with similar efforts in the United States, they were aimed at gaining the attention of, and ‘educating,’ the Western nations and ensuring the primacy of the ‘Jewish side of the story.’ Implicit in this was not only a desire to provoke anti-Russian attitudes, but also copious amounts of sympathy for the victimized Jews — sympathy necessary to ensure that  mass Jewish chain migration to the West went on untroubled and unhindered by nativists. After all, wasn’t the bigoted nativist just a step removed from the rampaging Cossack? END_OF_DOCUMENT_TOKEN_TO_BE_REPLACED 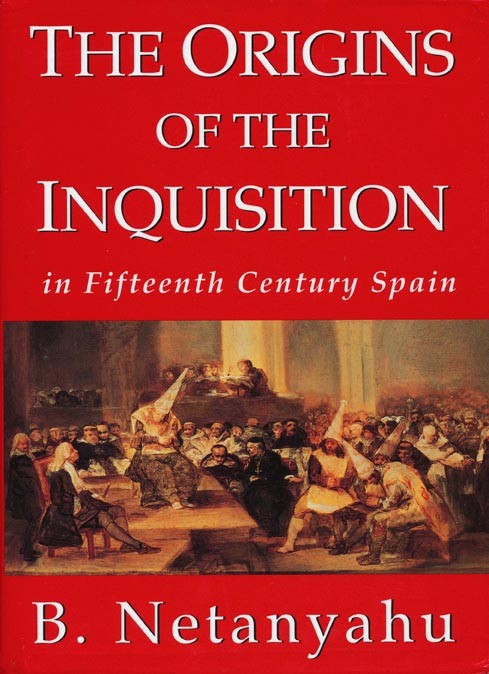 Benzion Netanyahu, father of the current Israeli PM, has died at the age of 102. Uri Avnery, an Israeli peace activist, describes Netanyahu  fils  as “a Holocaust-obsessed fantasist, out of contact with reality, distrusting all Goyim, trying to follow in the footsteps of a rigid and extremist father – altogether a dangerous person to lead a nation in a real crisis.” Like father, like son.

Benzion Netanyahu was a prototypical Jewish activist, switching easily from his work as secretary for racial Zionist Vladimir Jabotinsky, to successfully lobbying for a pro-Zionist platform for the Republican Party in 1944 (which caused the Democrats to adopt a similar platform), to his work as a Jewish academic historian advancing Jewish interests in academia. His best-known book, The Origins of the Inquisition in 15th-Century Spain, was published in 1995 by Random House.

dissect the consequences of Jewish naivete. Benzion’s fascination with medieval Spain wasn’t based only on the behavior of the victimizers but of the victims. He not only drew a line connecting what he defined as the racial anti-Semitism of the Inquisition with Nazism, but implicitly drew a line between the Jews who saw medieval Spain as their golden land and the Jews who saw modern Germany as their new Zion. It is precisely that dread of Jewish self-deception that has defined the politics of Benzion’s son.

Similarly Jonathan S. Tobin, writing in Commentary,  claims that Netanyahu’s “understood that hatred and intolerance lay at the roots of the difficulties of the Jews then as now. As his son noted at his funeral …, the challenge is to “face reality head on” and “draw the necessary conclusions.” END_OF_DOCUMENT_TOKEN_TO_BE_REPLACED 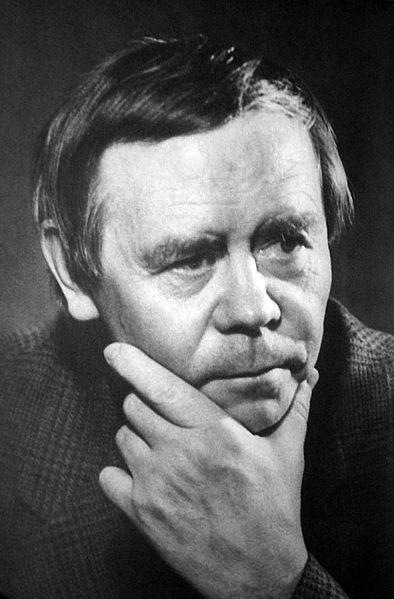 With the passing of the great Solzhenitsyn (1918–2008), the no less great, though in a different genre, Valentin Rasputin (b. 1937), assumed the mantle of doyen of the Russian literary scene. Whereas Solzhenitsyn wrote monumental tomes about festering political issues in Russia (Gulag, Revolution, Jews) and gained international fame thereby, Rasputin, a son and guardian of Siberia, gained his initial recognition mostly from his finely executed, almost precious novellas about life in his homeland and the ruin the Communist government was inflicting on it.

While the differences in style and subject matter between Solzhenitsyn and Rasputin are obvious, the bonds of similarity that immediately identify them as Russian writers are less so. Russian literary figures have religiously followed the tradition of earlier Russian literary figures like Pushkin, Gogol, Dostoyevsky, Tolstoy, and Bunin in seeing the role of the writer not as an entertainer or propagandist but as a kind of culture-bearer, a teacher, a conscience, and always a patriot — not in the sense of a chauvinist but rather as one who loves his country and its people. Such literary giants therefore help forge “a spiritual commonality” with their readers and give them “moral direction.” To fail to do this would be considered a betrayal of a sacred trust.[1]

The principles of Orthodox Christianity are most evident in the lives of both Solzhenitsyn and Rasputin. Rasputin, for example, was baptized by an Orthodox priest in 1980, when the Communist government was still in power. Both the writings of Solzhenitsyn and Rasputin are suffused with not only a sense of civic responsibility but with an overriding moral concern as well. Just as the Orthodox Church keeps alive and treasures everything in its past history, both Solzhenitsyn and Rasputin reach into older Russian writings to retrieve and reuse words and expressions that might have fallen into disuse. Both writers also studied ancient Russian folklore. Both were literary crusaders. END_OF_DOCUMENT_TOKEN_TO_BE_REPLACED 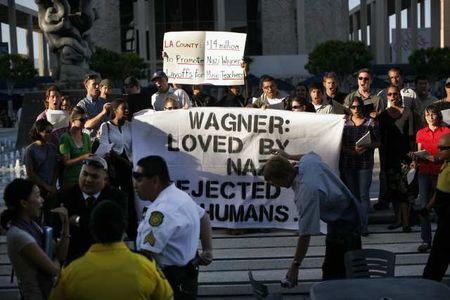 Basically ignoring whether Wagner’s views on Jewish influence on German art and culture had any validity, a long line of Jewish music writers and intellectuals have furiously attacked the composer for having expressed them. In his essay “Know Thyself” Wagner writes of the fierce backlash that followed his drawing “notice to the Jews’ inaptitude for taking a productive share in our Art,” which was “met by the utmost indignation of Jews and Germans alike; it became quite dangerous to breathe the word ‘Jew’ with a doubtful accent.” Wagner’s critique of Jewish influence on German art and culture could not be dismissed as the ravings of an unintelligent and ignorant fool. Richard Wagner was, by common consent, one of the most brilliant human beings to have ever lived, and his views on the Jewish Question were cogent and rational. Accordingly, Jewish critics soon settled on the response of ascribing psychiatric disorders to Wagner, and this has been a stock approach ever since. As early as 1872 the German Jewish psychiatrist Theodor Puschmann, offered a psychological assessment of Wagner which was widely reported in the German press. He claimed that Wagner was suffering from “chronic megalomania, paranoia… and moral derangement.”

The long-time music critic for the New York Times, Harold Schonberg (who was a Jew), described Wagner in his Lives of the Great Composers (1997) as “amoral, hedonistic, selfish, virulently racist, arrogant, filled with gospels of the superman … and the superiority of the German race, he stands for all that is unpleasant in human character.” In 1968 the Jewish writer Robert Gutman published a biography of Wagner (Richard Wagner: the Man, his Mind and his Music) in which he portrayed his subject as a racist, psychopathic, proto-Nazi monster. Gutman’s scholarship was questioned at the time, but this did not prevent his book from becoming a best-seller, and as one source notes: “An entire generation of students has been encouraged to accept Gutman’s caricature of Richard Wagner. Even intelligent people, who have either never read Wagner’s writings or tried to penetrate them and failed … have read Gutman’s book and accepted his opinions as facts.” END_OF_DOCUMENT_TOKEN_TO_BE_REPLACED 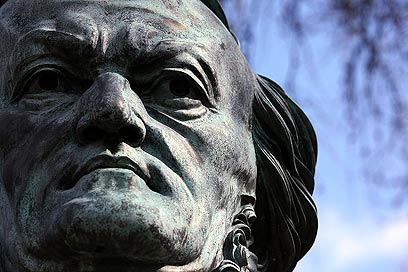 In the 2010 feature-length documentary Wagner and Me the British celebrity Stephen Fry explored his love affair with the music of Richard Wagner. Fry, who is Jewish, homosexual, and bipolar, enjoys a multi-pronged “victim” status that has made his identity politics credentials the aesthetic equivalent of a nuclear warhead. The inevitable consequence of this (and his Leftist politics) is his constant presence in the British media. Indeed, Stephen Fry is possibly the most overrated and overexposed individual in the history of British entertainment, and has benefited enormously from the intellectual elite’s construction of Jewish genius to the point where he is routinely hailed in sections of this fawning media as a “genius” and a “national treasure.”

As well as providing another celebrity vehicle for the overrated Stephen Fry, Wagner and Me offered another platform for exploring the life, work and thinking of one of the world’s most famous “anti-Semites.” While acknowledging Wagner’s undoubted genius, Fry reminds us in portentous tones that “a shadow falls across the sublime music. It’s not only the fact that it was later appropriated by Hitler which makes some people think of Wagner’s art as tainted. It’s also because Wagner himself was outspokenly anti-Semitic.” END_OF_DOCUMENT_TOKEN_TO_BE_REPLACED