It is impossible to exaggerate the complacency and irresponsibility of the ruling class in Europe today.

European leaders are not stupid, nor are they unaware. Consider the following speech from October of last year by European Commission President Jean-Claude Juncker:

I do not often cry, but when I look evening after evening at this long procession of refugees which remind me of those black-and-white images at the end of the Second World War which I saw when I was young, I sometimes almost cry. I do not like this Europe — this navel-gazing Europe, this Europe which is closing itself to the hopes and expectations of others. I love the Europe where hundreds of thousands of volunteers come to help, to support the refugees. Me, I know full well that we cannot welcome on our territories all the misery of the world, but we need to at least look at the misery of the world before acting.

We were able to end the Cold War. We were, and I am proud of it, able to fuse nineteen national currencies into a single currency. In fact, I am the only politician in Europe left who is among the signatories of the Maastricht Treaty which created the European Union and the euro. . . . We must relearn how to be proud of Europe. We were able to end this tragedy where Europe was a continent of wars. We have peace. The entire planet admires us for this. Except sometimes, and more and more often, the Europeans.

We very often forget, my dear friends, that Europe is the smallest continent. The European Union is a territory of 5.5 million square kilometers. Russia, a European country, represents 17.5 million square kilometers. Our relative share of global gross domestic product is shrinking. Within a few years Europe will represent 15 percent of global gross domestic product. Already 80 percent of growth is taking place in countries outside the European Union. And we are already demographically very weak. We were at the beginning of the twentieth century, us Europeans, we represented 20 percent of the world population. Today, 7 percent and at the end of century among 10 billion men, women, and children, Europe will represent 4 percent. Therefore we are the smallest continent. We are demographically weakened and will remain so. . . . Therefore, the moment has not come for us to divide ourselves into leagues and national categories, the moment has to come to ensure that the European Union remains together, that it emerges strengthened from events and from crisis events. . . . And therefore, we must be careful to respect the nations. The nations who incidentally must remain internally united. There are too many divisions in Europe. No more must be added. Therefore, I would like that the whole of Europe remain coherent and remain consequential in its actions and not merely in its ambitions. [My emphasis.]

END_OF_DOCUMENT_TOKEN_TO_BE_REPLACED 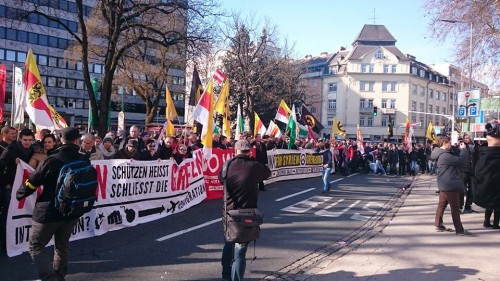 Below is my text-speech translated from the German original into English, delivered on February 20, 2016 in the Austrian city of Klagenfurt, at a rally against non-European migration. The anti-immigrant demonstration was organized by “the Identitarians” (IB) (Identitäre Bewegung), a rapidly growing cultural-political movement in Austria  The IB rally was attended by approximately 700 people from all walks of life and all ages, including groups of younger people from Croatia and Slovenia. Approximately 100 police cordoned off the IB rally to keep them apart from the approximately 150 antifascist (“Antifa”) demonstrators marching several hundred yards away. My speech in the German language was held on the steps of the entrance to the city hall and lasted 30 minutes. The Antifa protesters, who could neither be seen nor heard from where I stood, were holding some posters including the one with the Yugoslav communist flag which read “Tito proved how to take out the Nazis” — a vicious threat indeed. Next day I emailed a letter to the mayor of Klagenfurt and to the Austrian federal police with the copies sent to hundreds of different media outlets and politicians in Austria, complaining about the Antifa deaths threats against the IB rally participants. However, during the IB rally no incidents were reported. The Austrian mainstream media, other than the Antifa websites, reported relatively objectively about the entire affair.

Everything always turns around the correct or incorrect definition of political concepts. We call ourselves freedom-loving people concerned about the future of our European identity. Our opponents, however, call us Nazis, racists and xenophobes. From our experience, from my own experience in the former Yugoslavia and in multicultural America, as well as my reading of the research of many sociologists, multicultural states tend to survive for only a short while. Sooner or later they end up in civil wars. My reference point is the artificially cobbled together state of Yugoslavia which ended up in shatters — despite its many academic well-wishers and all the eulogies written on behalf of its constituent peoples.

Today’s migration chaos has officially been given the false name of “the refugee crisis.” Out of thousands and hundreds of thousands of migrants flocking to Austria, most are not refugees at all. They are “refugees” only in so far as were labelled as such in advance by the Austrian ruling class and media. Oddly enough, these migrants do not apply for asylum in Turkey or elsewhere on the proverbial route through the Balkans. All are eager to come to Germany. They imagine Austria, Germany and Sweden as La-La lands (“Schlaraffenland”) where they can live well and have their way with beautiful girls at will. But, hold it ladies and gentlemen! These migrants must not be blamed for their false perceptions; it is our politicians with their self-deceptive illusions who trigger such wishful thinking among the migrants. END_OF_DOCUMENT_TOKEN_TO_BE_REPLACED 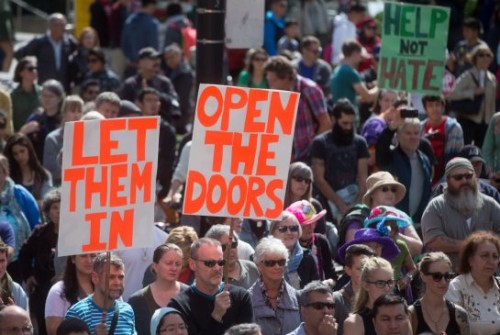 “There is no place in modern Europe for ethnically pure states. That’s a 19th century idea and we are trying to transition into the 21st century, and we are going to do it with multi-ethnic states.”  – Retired General Wesley Clark

Here are a few disquieting facts and figures that tell their own tale.

Going on the available 2009 figures—the figures are far higher now in 2016—the total number of foreign citizens living in Europe is roughly 32 millions. More than half of these (16.8 million) live in three European countries: Germany, Spain and the UK. Germany comes out top of the list with 7.2 million, yet the out-of-touch Angela Merkel is happy to take in more, seemingly impervious to logic and facts. The horrific sexual assaults of over 600 German women in Cologne on New Year’s Eve has left Merkel seemingly unmoved. Spain is second in Europe’s Top of the Pops for foreign citizens flooding in, with 5.6 million immigrants, and the UK comes in third with just over 4 million. (See here)

LONDON, ‘THE CITY OF DREADFUL NIGHT’

As for the UK, London, the nation’s bustling capital city of 8.6 million people, contains only 44.9 percent White Britons. Another 14.9 percent here are classified as ‘Other Whites’, with large numbers from Poland, Hungary, Rumania and elsewhere. 44 per cent of Londoners are now Black or of some other non-White ethnic origin. Almost every face you see in Oxford Street, London, is non-White. Occasionally a white face will pop into view, a face generally looking flustered and alarmed. In 15 years’ time, by 2031, the number of foreigners is set to outnumber the native Brits in London. END_OF_DOCUMENT_TOKEN_TO_BE_REPLACED

Do you help to solve the migrant rape crisis in Europe by eating pork, growing beards, and parading round the streets in miniskirts when you’re a man? Does it make sense to give “flirtation lessons” to the same migrants who are sexually assaulting European women in ever increasing numbers? Is it wise to help hostile migrants to “integrate” by giving them target-practice training, turning them into first-class snipers?

These are some of the more surrealistic aspects of the migrant rape crisis in Europe which I hope to cover in this 2-part essay. 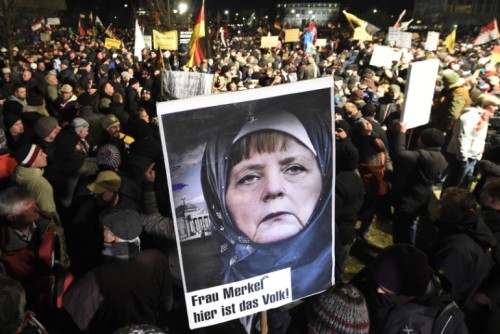 ANGELA MERKEL, dressed in a Muslim headscarf — the woman most often blamed for the migrant crisis in Europe

Consumed with Holocaust guilt and possessed by the demons of pathological altruism, German Chancellor Angela Merkel has handed over her country to the endless hordes of the Third World. “Let them come . . . we can look after them all,” she murmurs serenely, echoing the words of the altruists all over Europe bearing placards that scream: “REFUGEES WELCOME!”

Merkel is an interesting case history: the guilt-ridden, traumatized leader of a deeply traumatized nation. Her way of handling the migrant crisis in Germany is not so much a stupendous example of pathological altruism at work as a symbolic act of self-flagellation on behalf of the German people, all of them engaged in varying degrees of self-flagellation over the Holocaust.

“The culture of the Holocaust is destroying Germany, ” Brenton Sanderson notes in a thought-provoking 3-part article in the Occidental Observer. “Endlessly reinforced over decades by the intellectual and media elite, the notion that Germans and their descendants are responsible for “the single most evil event in human history” has had such a demoralizing effect that millions fully support Angela Merkel’s current attempt to destroy the ethnic basis of their nation.”

To understand  these words is to grasp the root cause of Germany’s suicidal approach to the migrant crisis. Letting Germany be destroyed, the entire ethnic basis of the nation expunged, can be seen for what it is: a collective act of atonement for the Holocaust. END_OF_DOCUMENT_TOKEN_TO_BE_REPLACED