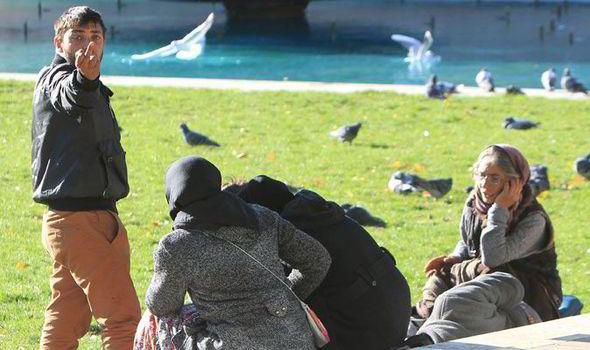 There is an increasing awareness that the May elections for the European Parliament could be a watershed moment. After listing most of the nationalist parties, Timothy Garton Ash, who wears his hostility to all things nationalist on his sleeve, writes in the LA Times:

“Today is the beginning of the liberation from the European elite, the monster in Brussels,” cried [the Dutch Party for Freedom’s Geert] Wilders. “Patriotic parties,” added [Marine] Le Pen [leader of  France’s National Front], want “to give freedom back to our people” rather than being “forced to submit their budget to the headmistress.”

There is nothing at all coming from the current leadership in Berlin, Paris or Brussels (forget London) that is likely to reverse the tide that’s buoying these parties. Behind their typical 10% to 25% standing in opinion polls is a wider popular discontent with unemployment, austerity and a Brussels EU bureaucracy that spews out regulations about the specifications of your vacuum cleaner and how much water you can use in a toilet flush.

If the tide continues to rise, what happens? (“Is Europe headed for divorce?“)

Ash suggests that a strong showing in the elections would “drive the mainstream socialists, conservatives and liberals closer together.” But unless these elites completely change course on immigration and national identity, I rather  doubt that they can stem the tide. This is very good news indeed. One of my fantasies is that the nationalist right would find a billionaire or two who would fund strong opposition to immigration and multiculturalism in the way that the treasonous mainstream parties have enjoyed for decades. Well, it turns out that  the UK Independence Party has found one in Paul Sykes, a billionaire property developer. Sykes has said that he will do “whatever it takes” to promote UKIP in the May elections.

UKIP’s main issue is jettisoning the EU, but that completely dovetails with concern about immigration because as of January 1, EU regulations are forcing the UK to open its borders to Bulgaria or Romania—and that means tens of thousands of those delightful and industrious Roma adding further vibrancy to the UK. Like the U.S. where states that are powerless to control their borders (as exemplified by the fate of California Proposition 187 and Arizona SB 1070  which were vitiated by the courts), the EU controls immigration policy throughout Europe. Once again, it’s all about top-down control by elites out of touch with legitimate popular attitudes and hostile to the traditional peoples and culture of the West.

This UKIP video on immigration is careful to stay within politically correct boundaries — non-White spokespeople, explicit rejections of “racist” attitudes, and focusing mainly on economic arguments. But the bottom line is their point that it is impossible to control immigration if the UK stays in the EU. And given the impending Roma invasion required by the EU, opposing the EU has a huge, gut-level emotional hook.

It’s quite clear that Sykes is deeply concerned about immigration—indeed it would appear to be his main issue. In this interview with BBC  on why he is supporting the UKIP, he claims that British politicians ignore popular opinion on immigration and do their best to prevent popular discussion or input on the subject—the same top-down control of this vital issue by elites that has occurred in all Western countries. He notes that the vast majority of the people of Yorkshire do not want the  border restrictions on Romanians and Bulgarians to be removed on January 1 as required by EU regulations.

The real fear, of course, is that the Roma will inundate the UK, which will have little impact on the British labor market but result in a large drain on public services. As Jim Goad notes in Talkimag, “Gypsies are exactly like Jews, minus the accomplishments.” That is, they have maintained cultural and genetic separation from surrounding peoples for centuries, and combined that with hostile and instrumental attitudes toward the surrounding peoples. (I review the Roma/Gypsies as a case study of a group evolutionary strategy in my Diaspora Peoples, p. ixff.) But the Roma combine these basic traits of a group evolutionary strategy with a completely opposite ecological profile—low-IQ, illiteracy and avoiding educational opportunities, low-investment parenting, high fertility, early age of marriage, lack of involvement in the labor force, criminality, welfare dependency, and completely lacking in financial or political power.

But precisely because they are so universally disliked, the Roma become an ideal stalking horse for those concerned about the immigration onslaught in general. If you can’t dislike the Roma, who can you dislike? As Goad notes in his inimitable style, “Isn’t it possible, even to the most starry-eyed egalitarian dipshit, that there’s at least one ethnic group on this planet that genuinely sucks? Why can’t that group be Gypsies?”

Leo McKinstry in The Express has a wonderful column on the threat presented by this impending invasion and the treasonous behavior of the political class in the UK. After mentioning a teenage Roma trying to sell a newborn baby, McKinstry has the following to say on these potential new Englishmen:

Already there are estimated to be 200,000 Roma people living here but that number will be dwarfed once all border controls are lifted. “In January the only thing left will be the goat,” says one Roma father of seven, warning that his entire village plans to come to England.

This wave of mass immigration from two of Europe’s most impoverished countries will be a disaster for Britain, hastening the collapse in national identity, wrecking social cohesion and imposing an intolerable strain on civic infrastructure.

Welfare bills will soar, not least because many migrants are adept at exploiting the laxity of our benefits. Even now a third of all sellers of the Big Issue fundraising magazine are Romanian, since such a role allows them to claim self-employed status and thereby gain access to social security. Incredibly, over the past five years there have been 27,000 arrests out of an estimated population of 87,000 Romanians living in London.

This act of institutionalised self-destruction has been foisted on us by a treacherous political class that selfrighteously preens itself over its devotion to multiculturalism and open borders. The imposition of mass immigration over recent decades has been accompanied by a barrage of official propaganda extolling the joys of diversity and portraying all opposition to this creed as racist bigotry.

But the spin machine cannot maintain the illusion of success.

Even the high priests of political correctness have to admit that something has gone wrong. So last week two of Sheffield’s most senior MPs, Labour’s David Blunkett and Nick Clegg of the Liberal Democrats, attacked the conduct of the Roma in their city.

Blunkett warned that there would be “an explosion” unless there is a change “in the culture of the incoming Roma community”, while Clegg said that the Roma “behave in a way that people sometimes find intimidating, sometimes offensive”. Yet for all its apparent candour, the language of the two men reeks of opportunism and double-standards. In reality they were both responding to grievances expressed primarily by the local Pakistani community.

Would they have used such rhetoric if it was just the white British working-class people complaining about a minority group? I doubt it.

In such a case they would probably have shrieked about the intolerance of the indigenous population. Indeed, Clegg now has the nerve to bleat about the duty of the Roma “to be sensitive to the way of life as lived in this country”, yet he had never taken such a robust line with Muslims in Yorkshire, even as some cling to deeply unBritish practices such as the adoption of Sharia law or the wearing of the burka.

Obsessed with hierarchies of victimhood the Left sees grievances as only being legitimate if they come from a migrant community.

We are paying a terrible price for the creed of Left-wing politicians.

They pose as champions of progress yet their fixation with multiculturalism is dragging us into a new dark age. In many of our cities, social solidarity is being replaced by divisive tribalism, democracy by identity politics.

Well said, and I wholeheartedly agree that the end result of this onslaught is the racialization of politics. Incidentally, one wonders whether all the recent attention given to the “knock out game” attacks by Black “troubled youth” in the U.S. is because there have been attacks against Jews in Brooklyn. As this article notes, the game has been going on for years without any publicity in the mainstream media and despite Colin Flaherty’s White Girl Bleed a Lot. But now the attacks are being investigated as “hate crimes” because Jews are victims. This after years of attacks in which the vast majority of victims have been Whites attacked by Blacks (including “Polar bear hunting” episodes which obviously target Whites) have been suppressed in the mainstream media.

But that’s getting off topic. The lesson here is that Paul Sykes is putting big money behind the opposition to the ongoing immigration disaster and in particular the impending onslaught of tens of thousands of more Roma to the UK. In the U.S., there is no party that has even the modest track record of the UKIP that could credibly attract that kind of funding. But it does show that once a party gets some traction, it can very rapidly move into the big time, by appealing to popular, common sense, and entirely legitimate attitudes on immigration and multiculturalism—and attracting people like Paul Sykes. We desperately need more people like him.

The revolution will begin in Europe.