As propaganda goes, one would be hard pressed to find a nastier, more noxious piece than Sander Gilman’s Newsweek op-ed on the horrifying fact that Paul Nehlen tweeted that he was reading my book, The Culture of Critique. Here’s Nehlen’s tweet:

Nehlen committed the horrible sin of simply saying that he was reading the book, not endorsing it. But for this he has been pilloried in the media and disowned by the likes of Steve Bannon (just as well;  I have lost all respect assuming his remarks in Michael Wolff’s book were quoted accurately). After the over-the-top title, “The Alt-Right’s Jew-Hating Pseudoscience Is Not New,” we are greeted with photo of a KKK rally, the implication being that Nehlen and I endorse such things, or perhaps that the KKK spends their spare time reading my book.

This is ridiculous. Nehlen is a sincere Christian who is deeply concerned about the transformations to the U.S. brought about by immigration and multiculturalism; he is fighting the good fight against Ayn Rand groupie, open borders Speaker of the House Paul Ryan. And for my part I won’t dignify the juxtaposition of the KKK with my work as worthy of a response. My writing speaks for itself. 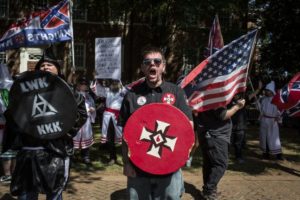 MacDonald’s claim is that Jews use anti-Semitism as a means to further their own advancement—indeed, that anti-Semitism is a Jewish tool to advance a society that is in competition with white, Christian culture. There is little need to explore MacDonald’s rather dreary work, as I have done so in much greater detail in my 2016 co-authored book, Are Racists Crazy? How Prejudice, Racism, and Antisemitism Became Markers of Insanity. What interests me much more is that MacDonald (and Nehlen) stand in a long line of anti-Semites who invented, and then reinvented, a new science to prove the inequities and corruption of those people that they label “Jews.”

Unfortunately, Gilman’s rendition of the thesis of Culture of Critique has nothing at all to do with the thesis of the book, which is all about Jewish ethnic activism on the left, particularly as regards immigration and several intellectual movements that have been very influential in the academic world. One of the main points is that, like Gilman, a main motivation of these intellectuals was to end anti-Semitism by attempting to de-emphasize the Jew/non-Jew distinction (often by invoking leftist universalism) or by portraying anti-Semites as psychiatric cases. Indeed, Gilman is nothing if not a Jewish academic activist himself, so it’s no surprise that he engages in both of these subterfuges in his op-ed.

His book, Are Racists Crazy?, would be an excellent addition to CofC because it would fit right in with the chapters on psychoanalysis and the Frankfurt School where I discuss how Jewish activists have developed theories in which ethnocentric White people, or indeed, all White people who have strong family relationships and a sense of historical belonging, are seen as having a psychiatric disorder —  the “fundamentally political program of indicting gentile culture and especially gentiles who represent the most successful and culturally approved members of their society” (185). Gilman epitomizes an important theme of CofC — that any sign of ethnocentrism among non-Jews is seen as a pathology whereas the massive elephant in the room of Jewish ethnocentrism is never discussed.

Gilman’s statement that “those people they they label ‘Jews'” illustrates another theme of CofC — that these intellectuals de-emphasized Jews as a social category. As I note in the chapter on the Frankfurt School, “a consistent theme in Chapters 2–4 is that a major thrust of Jewish intellectual movements since the nineteenth century has been to devise theories that minimize the importance of the social category Jew-gentile while allowing for the continuation of a very strong sense of Jewish identity.” “Those people that they label ‘Jews'” suggests that the category of Jews is really a figment of the imagination of anti-Semites. It’s just a label that anti-Semites use to describe people they want to prove are, to paraphrase Gilman, unequal and corrupt. But of course the category of Jews is far more than simply a label used by people that Gilman labels “anti-Semites.” And there can be little doubt that Gilman has a very strong sense of Jewish identity and sees his work as advancing Jewish interests — the common denominator of all the Jewish intellectuals reviewed in CofC.

The point of CofC is that Jews and non-Jews often have different interests in the construction of culture, and that Jewish activists like Gilman have attempted (and largely succeeded) in creating a culture that serves Jewish interests while compromising the legitimate interests of non-Jews. I document this with hundreds of references, mainly to Jewish authors (including Gilman’s book on Freud).

Amazingly, Gilman includes as a pseudoscientist (and “anti-Semite”) anyone who thinks that Ashkenazi Jews are smarter than non-Jews (Charles Murray, Richard Herrnstein [!!], Gregory Cochran, Henry Harpending) as well as anyone who thinks Jews are Jews are “stupid” (Eugen Dühring). He could include me in the list of people who accept the empirical evidence that Ashkenazi Jews have a higher IQ than non-Jews, a literature I first reviewed in Chapter 7 of A People That Shall Dwell Alone. But for Gilman, any labeling of Jews at all, whether positive or negative,) is off-limits. Hence his book Smart Jews: The Construction of the Image of Jewish Superior Intelligence in which my original writing on Jewish intelligence is included as an example of invidious labeling of Jews by someone with nefarious intent. For Gilman, IQ is nothing more than a social construct used to make invidious portrayals of individuals and groups, thus ignoring 100+ years of research on arguably the most studied and best established psychological trait with a host of important real-life correlates (see this article by another notorious anti-Semite, Linda Gottfredson).

Gilman’s attitude about Jewish IQ is consistent with the point I make above — that he does not want to have any labeling of Jews at all. If labeling of Jews is off-limits, then any negative labels are off-limits. His program is to place empirical research on Jews as a group as off-limits because such research might show Jews in a negative light and hence compromise Jewish interests. A preemptive strike, if you will. Hence Joe Biden’s faux pas in effusively praising Jews as a group:

Joe Biden should  know the ground rules by now. You can praise the contributions of individual Jews. It’s totally permissible to wax eloquent on the accomplishments of  Sigmund Freud [bad example; Freud was a pseudoscientist par excellence], Jonas Salk, or Albert  Einstein—perhaps even implying that humanity would never have come on these ideas and thus be infinitely poorer for it. … You  can even  praise the Jewish community’s role in enacting public policy on which there is a broad consensus, such as the Civil Rights movement.

But you can’t imply that Jews have real power and have used it to push America in directions most Americans don’t want to go or obviously conflict with the legitimate interests of other  groups—particularly Whites. …

In particular, as noted also at TOO, Biden claims that Jews have been at the vanguard of gay marriage. We at TOO have also noted Jewish domination of the gun control movement and their responsibility for the mainstreaming of pornography and for the sexualization of culture. Jewish neocons with their power in the media and in the government were the main force behind the costly war in Iraq. And by far most importantly Jews have been the main force behind displacement-level non-White immigration (see also here regarding the current push for yet more massive increases in non-White immigrants). Biden cheerfully says, ““The embrace of immigration” is part of that, as is the involvement of Jews in social justice movements.”

But that is a mistake. Banning honest discussions of Jewish power is the linchpin that protects Jewish power.

A corollary of this de-emphasis on the category of Jews as a group is that, while the movements discussed in The Culture of Critique (and Gilman’s Are Racists Crazy?) portray ethnocentric Whites as having a psychiatric disorder, the ethnocentrism of arguably the most ethnocentric group in history is never discussed in this literature. And by implication, if we follow Gilman’s lead, labeling Jews as ethnocentric would be off-limits just as labeling them smart, stupid or influential is off-limits.