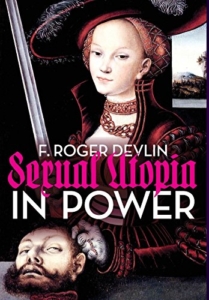 The second monthly TOQlive will be on Sunday, December 2 at 8PM Eastern time (click here to access). As always, it will be a live show, with the last half hour devoted to answering audience questions and comments. Our guest will be F. Roger Devlin who is well known to readers of TOQ and TOO, particularly for his writing on gender issues (click here for his 17 articles on TOO). His book, Sexual Utopia in Power is a classic deconstruction of the sexual revolution that began in the 1960s: He “explores today’s sexual dystopia, with its loose morals and confused sexual roles; its soaring rates of divorce, celibacy, and childlessness; and the increasingly arbitrary and punitive attempts to regulate and police it. Devlin shows that the breakdown of monogamy results in promiscuity for the few, loneliness for the majority, and unhappiness for all.”

His most recent article for TOO is a masterful review of Stephen Baskerville’s The New Politics of Sex which expands on the themes of Sexual Utopia in Power. As he notes, we are now at the point of the criminalizing masculinity:

The sexual revolution did not usher in prolonged anarchy; it replaced a voluntary system of self-control according to principles equally applicable to all with the bureaucratically enforced “empowerment” of one sex at the expense of the other. Thanks to recent headlines, it is finally beginning to dawn on even the dimmest conservatives that the sexual revolution has not “liberated male sexuality,” but subjected men to an arbitrary and hostile regime from which none of them is safe.

There is nothing “ironic” about the cheek-by-jowl existence of a casual sex scene and a bureaucracy dedicated to punishing the men who participate in it: the former acts as a necessary feeder for the latter. The proof is that no feminist has ever encouraged young women behave in ways which would prevent their getting hurt in the first place. Feminists find the hook-up scene far too useful to shut down.

Should be a great discussion.