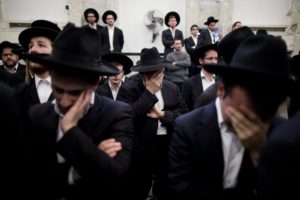 Although delighted by the advent of Brexit, I’ve forfeited participation in the celebrations and wistful speculations indulged in by many in our movement. I don’t deny that we’ve achieved a helpful success in the war to save our people. Nor do I deny that many of our enemies have been given a long-overdue dose of nationalist ‘shock and awe.’ Of more pressing interest to me, however, is the observation and anticipation of enemy counter-measures, as well as the assessment of just how much of a victory we have actually achieved. The following analysis of Jewish responses to Brexit will further illustrate not only the priorities of organized Jewry, but also the limitations of our achievement. It is hoped that this will result in a deeper understanding of the true significance of recent events in the context of the greater battle to reduce Jewish influence in our nations, and assist in the forward march to racial-national renewal.

It’s tempting at first glance to imagine that all Jews are against Brexit. This instinctive prediction arises in the nationalist mind due to the conflation of Jewish identity with liberalism and its modern globalist and ‘social justice’ corollaries. In many respects, of course, this is a helpful conflation that assists with accurate predictions. However, what the instinct neglects is a vast historical context in which the relationship of Jews with liberalism is very complex indeed, and in which such easy predictions lead to a facile and naive understanding of Jewish strategies. In brief, history indicates that Jews have fluctuated in their attachment to liberal and even globalist causes.

END_OF_DOCUMENT_TOKEN_TO_BE_REPLACED

It’s refreshing to see John Derbyshire’s comment on his experience at National Review with conservatives dealing with immigration policy.

Words have power—magic—and sometimes they have so much of it that we can no longer discuss rationally the things they refer to.

That has been the case with National Question issues for as long as I have been engaged with them. It has especially been the case with immigration. The whole topic has had an aura about it, a glow of magic, which acted as a kind of force field repelling all rational discussion. …

You could never get [conservatives] to engage with immigration. It seemed that in their minds there was something sacrilegious about doing so, something … unclean.

This was especially the case with Jewish conservatives (for them, I suppose, the correct term would be treyf). John Podhoretz, with whom for a while I shared blogging privileges at National Review Online, was particularly splenetic towards anyone who dared suggest that immigration on any scale is other than an unqualified good. (“John Derbyshire Detects the De-Sacralization (At Last) of Immigration Policy”)

I think that a major part of the problem is that Jews, whether in academic departments or at intellectual magazines like National Review, or pretty much everywhere else, have managed to pose as the ultimate moral paragons.  There is a long history of this, from the ancient world up to the present, recounted in Chapter 7 of Separation and Its Discontents, continuing into the present with the pervasive culture of the holocaust. And this feeling that Jews are morally superior extends to policies that Jews favor, including immigration policy and policy in the Middle East.  END_OF_DOCUMENT_TOKEN_TO_BE_REPLACED

From the Israeli apartheid page on Facebook, via Philip Weiss of Mondoweiss:

A bus in Jerusalem has this caption in large lettering:

Israel’s bus company Egged has accepted this ad in Jerusalem:
“Statement of the kingdom. From the teachings=instructions of the [Lubavitcher] rabbi

The Gentile does not want anything. He waits to be told what the Jew wants!”

P.S. Egged subsidiary EBS, had just lost a 320M euro 10-year contract in Haarlem district, Netherlands (Pop 155,000), after some demonstrations against its complicity in apartheid.

END_OF_DOCUMENT_TOKEN_TO_BE_REPLACED

A recurrent theme here is the contrast between the moral universalism of the West versus Jewish moral particularism. Moral universalism is a corrollary of individualism: Groups have no moral standing. Stealing doesn’t become right depending on what group the victim belongs to.

But Jewish ethics is based fundamentally on the group status of perpetrator and victim. It’s okay if the victim is from a different group. And within the group, ethics is structured so that the group as a whole benefits: What’s good for the Jews.

Dennis Praeger has a nice column on traditional Jewish moral particularism (“Can Halachah ever be wrong?“).

Suppose you ordered an electric shaver from a store owned by non-Jews, and by accident the store sent you two shavers. Would you return the second shaver?

Nine said they would not. One said he would.

What is critical to understand is why they answered the way they did. The nine who would not return the second shaver were not crooks. They explained that halachah (Jewish law) forbade them from returning the other shaver. According to halachah, as they had been taught it, a Jew is forbidden to return a lost item to a non-Jew. The only exception is if the non-Jew knows a Jew found the item and not returning it would cause anti-Semitism or a Khilul Hashem (desecration of God’s name). The one who said he would return it gave that very reason — that it would be a Khilul Hashem if he didn’t return it and could be a Kiddush Hashem (sanctification of God’s name) if he did. But he, too, did not believe he was halachically bound to return the shaver.

The nine were not wrong, and they were not taught wrong. That is the halachah. Rambam (Maimonides) ruled that a Jew is permitted to profit from a non-Jew’s business error.

Traditional Jewish law had different penalties for a variety of crimes—theft, taking advantage of business errors, rape, and murder (reviewed in Ch. 6 of A People That Shall Dwell Alone, p. 148ff). Even proselytes who had converted to Judaism had a lower moral standing than other Jews—a fact that has doubtless weighed heavily with prospective converts. END_OF_DOCUMENT_TOKEN_TO_BE_REPLACED