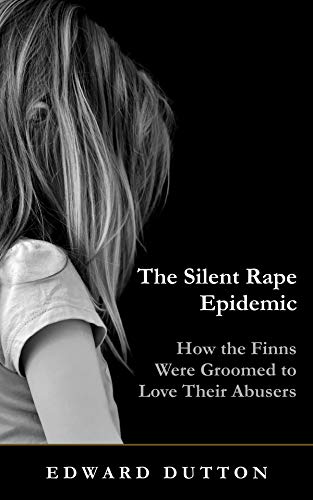 The Silent Rape Epidemic: How the Finns Were Groomed to Love Their Abusers
Edward Dutton
Oulu, Finland: Thomas Edward Press, 2019

Finns enjoy an unusually high-trust society. Longtime British resident Ed Dutton describes unmanned roadside vegetable stands that operate on the honor system, with customers reliably leaving the correct price for what they take. Travelers need not purchase a ticket before boarding a train; everyone happily pays the conductor as he comes through. At least until recently, girls in outlying villages could safely hitchhike into larger towns on Saturday nights.

Oulu (pronounced Oh-loo) is the largest city in northern Finland. It tends to be a dull place, and residents like it that way:

By 2005, however, the city had begun accepting small numbers of Muslim ‘refugees.’ That summer,

a 30-year-old worker for the Finnish Lutheran Church had been naïve enough to get talking to a group of Muslim men in a bar and, worse still, go back to their flat. She was rewarded for her friendliness towards these guests by having her clitoris cut off with a pair of scissors which were then inserted into her vagina.

During the next couple of years, several local women were raped by Muslim men in city parks. By 2008, the trend was being reported in a national tabloid—which, however, failed to mention that all of the assaults had been carried out by Middle Eastern men. Oulu’s local daily, Kaleva, stopped reporting perpetrators’ names. As in other Western countries, Finnish journalists tend to be aggressively cosmopolitan leftists who despise the folks back home, ordinary Finns with “their simple desire for a picturesque wooden house close to a lake; their contentment living in a society where people mostly think in the same way.” If such narrow-minded yokels were to learn what was really going on, the multicultural project might be threatened!

Soon, the names of Muslim criminals were being redacted from police and court press releases as well. Official reports spoke only of men “of foreign background,” as if Finnish women were being attacked by German tourists or Japanese guest lecturers from the local university. But the authorities knew the truth: a 2018 a study by the Finnish Police Academy found that 93% of rapes of foreigners in Finland in 2016 had been committed by men from Islamic countries. END_OF_DOCUMENT_TOKEN_TO_BE_REPLACED