Lately a lot of people—31% in a recent poll—have been thinking the previously unthinkable — a civil war. Specifically, they agreed that “it’s likely that the United States will experience a second civil war sometime in the next five years.” Moreover:

Women and those under 40 are more worried about a possible civil war than men and older voters are. Forty-four percent (44%) of blacks think a second civil war is likely in the next five years, a view shared by 28% of whites and 36% of other minority voters. Whites are also less concerned about political violence than the others are.

There’s no question that the level of polarization we see now is greater than perhaps any time since Civil War I. There is simply no common ground any more. Absent a complete capitulation to their policies (which is not going to happen), there is literally nothing that Trump can do that would be approved by the liberals and the left. The weeping that we saw after the election has turned into cold anger at Trump, his family (Peter Fonda wanting to “rip Barron Trump from his mother’ and put him in a ‘cage with pedophiles'”), and everyone in his administration (e.g., Sarah Huckabee Sanders and Scott Pruitt harassed). 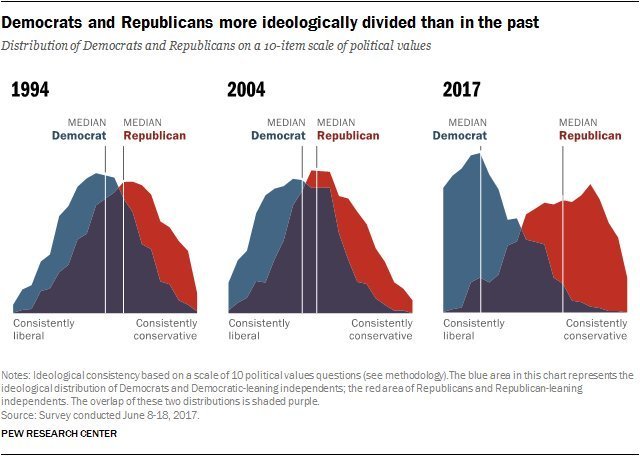 And President Trump realizes this. When Maria Bartiromo asked Trump what he could do to “bring the country together,” Trump talked about the loyalty of his base, implying that searching for a common ground is pointless. And he issued a warning:

@realDonaldTrump: “Do you know, there’s probably never been a base in the history of politics in this country like my base. I hope the other side realizes that they better just take it easy.” Trump basically stating he is ready for Civil War II. https://t.co/evrDafqkLg

But if recent events are any indication, the other side is not going to “take it easy.”

So what would a Civil War II look like? It would be very different from Civil War I. At a superficial level, it would be Republican vs. Democrat, but the dividing lines go much deeper. Race would be critical, as Whites constitute at least 90% of the Republican Party. The racialization of politics has been going on for years and will continue its steady increase as we head into the future, civil war or no civil war. It’s common now for media figures like Tucker Carlson to feature items that indicate the rising explicit hatred toward the White majority that is so common on the left.

It’s almost as though the left has gotten ahead of itself. I expected the hatred toward Whites to be held in check until the glorious future when Whites are a minority and relatively powerless.  But, as usual, there’s a vanguard of people leading the charge — and an audience eager to plug into anti-White hatred. You might say they are tipping their hand. The hatred we see now on Twitter and on media outlets like Salon, MSNBC and Huffington Post is getting more and more obvious.

“Darn white people and their…”

*drops cards on the floor*

So, predominantly it would be Whites against everyone else, although a minority of Whites would be on the urban/non-White side, as well as some Asians (and maybe even some Jews) and others who realize that a White America isn’t so bad after all. But the other big divide is the rural/urban divide. Big cities voted overwhelmingly for Clinton, rural areas for Trump. As a result, I’ll label the two sides White/rural and non-White/urban, realizing there is certainly some overlap on the rural/urban dimension. 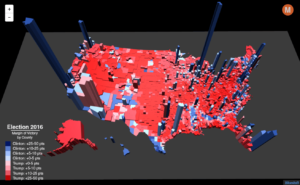 White men are especially likely to be gun owners: About half (48%) say they own a gun, compared with about a quarter of white women and nonwhite men (24% each) and 16% of nonwhite women. …

Regionally, Northeasterners stand out as the least likely to own guns: 16% of adults who live in the Northeast say they own a gun, about half the share who say this in the South (36%), Midwest (32%) and West (31%).

Republicans are far more likely to own a gun or live in a household where someone owns a gun: 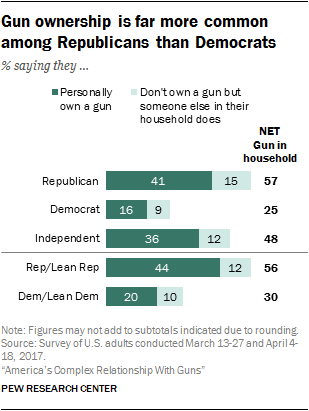 As noted in a previous TOO article, by Cooper Sterling, “the Left’s irrational obsession with gun control goes beyond the latest mass shooting. It is endemic among the cosmopolitan literati, who loathe Middle America, to dwell on the risks associated with firearms while disregarding or minimizing the benefits of firearm ownership.” As noted there, Jews and Jewish organizations have led the campaign against gun ownership. In any case, if Civil War II were to break out in the near future—before the left can achieve its goal of abolishing the Second Amendment—there can be little question that the White/rural side would have an advantage both in terms of gun ownership and in being able to use a gun effectively.

However, civilians, no matter how well armed, are no match for a trained military equipped with the latest technology. Whose side would the military be on? Given that there are large percentages of non-Whites in the military, there would likely be conflict between different factions. Nevertheless, White males have a clear majority (60% overall), especially in the Marines and Air Force, and especially in the officer corps. 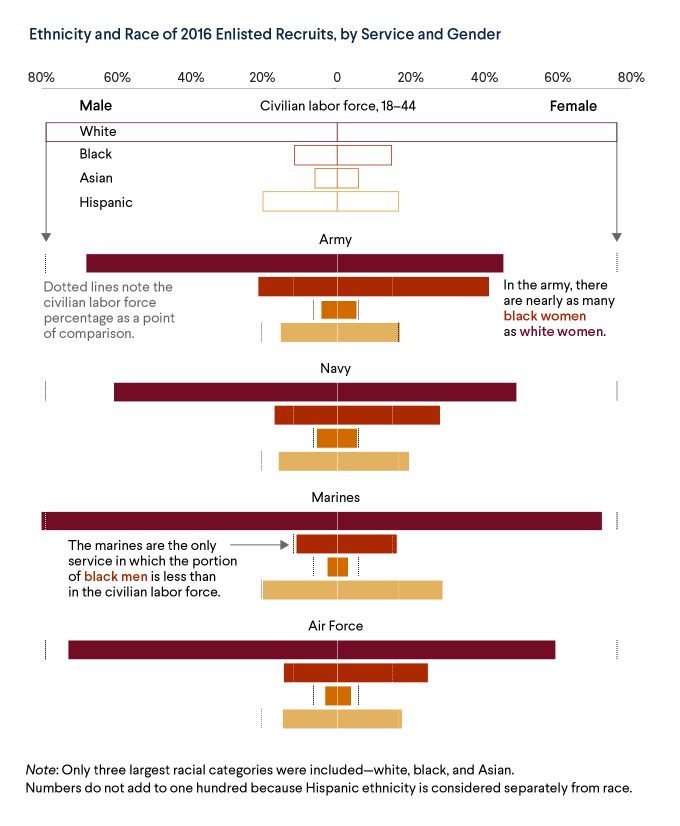 In general, the higher ranks of the officer corps are increasingly White (Air Force). In 2016, 72% of Army officers were White.

Moreover, military personnel appear to have voted overwhelmingly (>2 to 1) for Trump; an exit poll favored Trump 61%-34%.

What about the police? It’s worrisome that in areas like Berkeley, Charlottesville, and Portland, the police have stood down when antifa attacked peaceful right-wing protesters. However, this posture was decided at the top by local elected officials who are overwhelmingly on the left. In general, the police could be expected to favor the White/rural side. The largest police union, with around 333,000 members, endorsed Trump for president, including more than 2/3 of their National Board.

Moreover, Whites remain overrepresented in local police departments compared to their share of the local population, often because demographic change has happened so rapidly: “Despite efforts to become more diverse, minorities remain underrepresented to varying degrees in the vast majority of larger police departments throughout the country. Particularly in jurisdictions experiencing rapid demographic shifts, police largely do not reflect the racial and ethnic makeup of their communities.” For example, Milwaukee’s police department is 63% White even though Whites are only 37% of the population.

Bottom line: The White/rural demographic would do quite well if and when there is Civil War II. The quote at the top of this article concludes with “Whites are … less concerned about political violence than the others are.” For good reason.

What types of events could precipitate a civil war? One possibility would be events like the shutting down of ICE offices in large cities. In Portland recently, leftist protesters shut down an ICE office for over a week, with the city and state doing nothing to stop it (apart from directing traffic—the mayor et al. were entirely on board with shutting down a federal building). As a result, Department of Homeland Security officers were sent in to restore access to the building, with eight arrests. 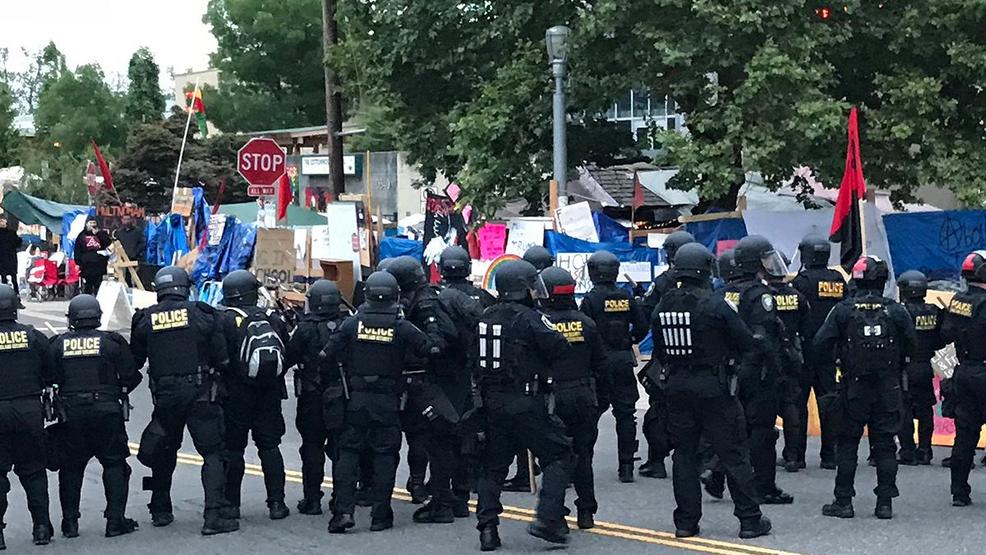 Department of Homeland Security personnel guarding the entrance to the ICE building in Portland.

One could imagine this sort of thing getting out of control, with the protesters bringing guns and the federal government responding in kind. Then the same thing happens in other urban areas, leading to large-scale deployments of troops but with fracturing and infighting along ethnic/racial lines within the deployed units. Not beyond imagining as the political atmosphere continues to deteriorate.

I agree with Enoch Powell: “as I look ahead, I am filled with foreboding; like the Roman, I seem to see ‘the River Tiber foaming with much blood.'” All the utopias dreamed up by the Left inevitably lead to bloodshed—because they conflict with fundamental human nature. The classical Marxist Utopian vision of a classless society in the USSR self-destructed, but only after murdering millions of its own people. Now the multicultural Utopian version is on the verge of collapse. Given the very large Jewish involvement in these projects, the big picture is that the thrust of Jewish power has been to create societies envisioned as being good for Jews, inevitably advertised in idealistic, humanitarian terms. It never ends well.

Better that the blood be shed sooner than later. When we look back on this era, we do not want to be forced to say that what we did was too little, too late, as happened ultimately to the 1924 immigration law. All of the measures of White representation in the forces of social control will continue to decline in the coming years given the continued deterioration of the demographic situation. At this point, even stopping immigration completely and deporting illegals would not be enough to preserve a White America long term.

The left and its big business allies/lackeys have created a monster. Whites have to realize that if they do nothing, they will be increasingly victimized and vilified in the coming decades as the monster continues to gain power. Better sooner than later.