As I’ve described in the articles “Free Speech Must Die!” and “Trashing the Torah,” Jews across the West are promoting a ludicrously vague definition of anti-Semitism devised by the International Holocaust Remembrance Alliance. The definition is designed to end free speech about Jewish power and runs like this:

Antisemitism is a certain perception of Jews, which may be expressed as hatred toward Jews. Rhetorical and physical manifestations of antisemitism are directed toward Jewish or non-Jewish individuals and/or their property, toward Jewish community institutions and religious facilities. (What is Antisemitism?, The Campaign Against Antisemitism)

The alleged priorities of Jews

The definition has been adopted “in full” by the British Conservative party, the Florida House of government, and many other Western institutions and organizations. It’s accompanied by a long list of “contemporary examples of antisemitism,” one of which runs like this:

Accusing Jewish citizens of being more loyal to Israel, or to the alleged priorities of Jews worldwide, than to the interests of their own nations. (What is Antisemitism?)

And yes, anti-Semites certainly do accuse “Jewish citizens” of disloyalty to the gentile nations in which they currently live. For example, in “A Shameless Shabbos Shiksa,” I said that Stuart Polak, a former director of Conservative Friends of Israel, was concerned only about Israel and Jewish interests, not about Britain. But it isn’t only hate-sites like the Occidental Observer that promote this horrible stereotype of Jewish disloyalty. You can also find the stereotype promoted in Britain’s oldest and most successful Jewish newspaper, the Jewish Chronicle.

How is that possible? Very easily, it appears. The Jewish Chronicle has recently reported that the all-Jewish soccer team Maccabi London Lions F.C. sent some of its junior players to an all-Jewish soccer tournament in Holland called Jom Ha Voetbal, or “Day of Football” (Jom Ha means “Day (of) the” in Hebrew and Voetbal means “Football” in Dutch). In celebration of their success at the tournament, a junior Maccabi team and its two adult supervisors posed on the playing field with a Maccabi F.C. flag like this: 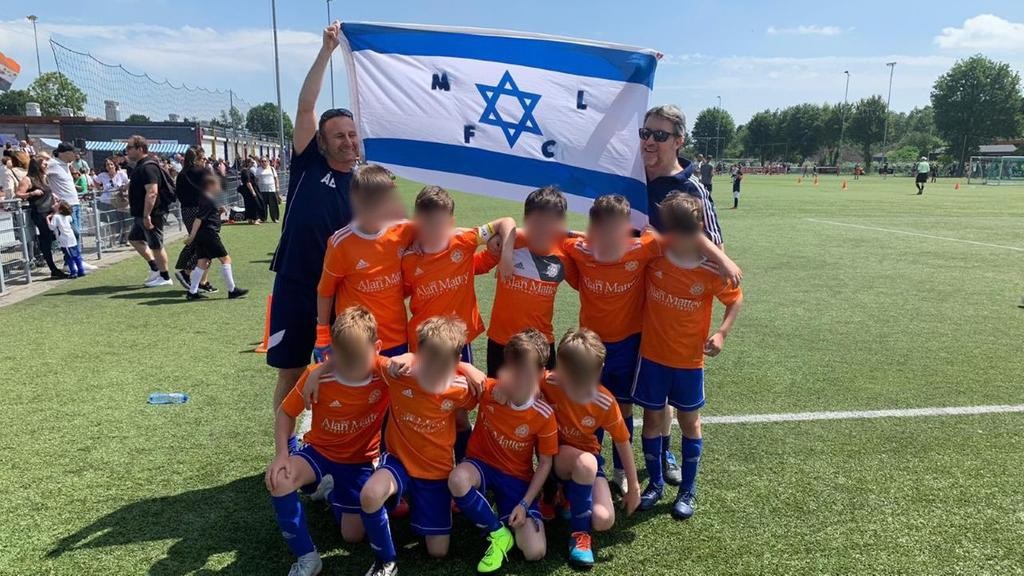 As you can see, eleven Jewish citizens of Britain chose to celebrate by posing proudly not with a British or English flag, but with an Israeli flag bearing the Star of David. Are these Jewish citizens “more loyal to Israel than to the interests of their own nation”? Well, what other conclusion can you draw? And when the Jewish Chronicle ran that photo in July 2019, it did so under the approving headline “Maccabi London starlets sparkle on European stage.” In other words, the Jewish Chronicle is very happy to promote a “contemporary example of antisemitism.” The Jewish Chronicle takes primary loyalty to Israel as a given among British Jews, while simultaneously condemning all gentiles who point out this primary loyalty.

The story about Maccabi London F.C. quoted the junior players’ manager Lee Reuben, who said: “The boys were a credit to the club. It’s always nice to come home with medals but more importantly they got to experience Jewish culture and a Shabbat together as a team. … We are all immensely proud of them and look forward to seeing them continue to represent the club in the future.” When Jewish boys are “a credit” to an exclusively Jewish sports-team, “Jewish culture” clearly mandates the flourishing of the Israeli flag (which is also often seen at the famous soccer clubs Tottenham Hotspurs in London and Ajax in Amsterdam, both of which are regarded as “Jewish clubs”). The photo of Maccabi F.C. also illustrates another central aspect of Jewish culture: the “white supremacism” that I discussed in “Efface the Facts: White Supremacism in the Jewish Community.” Because Maccabi London F.C. is only for Jewish players, it can exclude the Black players who are otherwise so prominent in British soccer. Accordingly, the eleven Jews in the photo are all stale pale males, and the parents of the junior players do not have to worry about their sons being harmed or influenced by violent and predatory Blacks.

But there is no way for British Whites to form officially recognized soccer teams that exclude Blacks and other non-Whites. Such exclusion would be illegal under “anti-discrimination” laws created and enforced by Jews like Anthony Lester and Jim Rose of the anti-White, pro-Muslim Runnymede Trust. But Maccabi London F.C., whose name celebrates the noble Jewish Maccabees who rebelled against gentile oppression and cruelty in ancient Palestine, can exclude Blacks by claiming to recruit players by religion rather than race. Anyone who criticized Maccabi London F.C. for this would, of course, face an over-used and usually unjustified accusation: that of being anti-Semitic.

Holocaust on the rack

When I say that, I’m using another “anti-Semitic stereotype”: that Jews use accusations of anti-Semitism in a dishonest and self-serving way. But guess what? The Jewish Chronicle has promoted that anti-Semitic stereotype too. Or at least, the Jewish journalist Melanie Phillips has done so in the Jewish Chronicle. Like Larry Auster and Jonathan Sacks, Phillips is one of those rare Jews who are prepared to openly criticize other Jews for harming gentile interests. In early July 2019, she opposed the construction of a huge and ugly Holocaust memorial near the Houses of Parliament in London:

Why aren’t more people speaking out against the misconceived plan to build a Holocaust memorial in Victoria Tower Gardens? The proposal, currently being considered by Westminster Council, has wide support across the political spectrum but staunch opposition over its impact on the gardens from groups such as Royal Parks, the Victorian Society and Historic England.

A cross-party group of Jewish peers has also spoken out. There are other opponents but they are keeping quiet — almost certainly because they fear being accused of antisemitism.

On every level, this is a misbegotten scheme. Architecturally, it will be an eyesore. Originally conceived with 23 tall bronze fins, it was likened to a giant toast rack. A revised design appears to have lowered the fins and allows less restricted views of the Palace of Westminster, but still threatens to stand out in brutal contrast to its surroundings.

… The scheme has been called a “national, sacred mission” by Theresa May while all the former prime ministers still alive — David Cameron, Gordon Brown, Tony Blair and Sir John Major — have spoken in its support. They all seem to have been motivated by a decent instinct to combat antisemitism and Holocaust denial. And situating the memorial next to Parliament itself makes an obvious and symbolic point about the political acceptance of Britain’s Jewish community. What they all seemed to forget was its likely environmental impact on the rest of the population. …(This giant toast rack won’t help us ﬁght hate, The Jewish Chronicle, 7th July 2019 — emphasis added)

A £102 million toast-rack: The proposed Holocaust memorial and learning centre near Parliament

Note how Phillips promotes an anti-Semitic stereotype: that gentiles “are keeping quiet — almost certainly because they fear being accused of antisemitism.” In other words, she is claiming that gentiles have legitimate objections to the “giant toast-rack,” but won’t voice them because they fear that Jews will unfairly accuse them of anti-Semitism.

And notice the “brutal contrast with its surroundings.” There’s no attempt to fit into the cultural milieu of the wider society. Like the Israeli flag being shown by a soccer team composed of British citizens, their Holocaust toaster rack is a testimony to the reality that Jewish assimilation in the Diaspora is superficial at best.

And finally, notice that while Phillips and some Jewish peers stood up to speak against the memorial, no non-Jews of note did, ensuring that passage was virtually assured. Given that we know that Phillips is nothing if not a Jewish patriot and the same is likely true of the Jewish peers, it is more than tempting to think that these Jews view the public perception of disagreement within the Jewish community on an issue that is transparently Jewish as a strategic asset because it provides an illusion that the Jewish community is deeply divided on the issue. It’s a bit like the few Jews in the U.S. Congress who voted against the Iraq war when they knew full well that there was overwhelming support for the war in Congress, and that the war was supported by AIPAC, the Israeli government, the neocon media-lobbying-government complex, the liberal interventionists, and the ADL (which played a supporting role by accusing anyone suggesting Jewish involvement in promoting the war of anti-Semitism). They understood that their vote would be meaningless but be useful in defusing the idea that Jewish influence was a necessary condition for the war.

I agree with Melanie Phillips: goyim are indeed keeping shtum “for fear of the Jews.” However, I think Phillips is wrong to say that “a decent instinct to combat antisemitism and Holocaust denial” explains why “all the former prime ministers still alive” have supported the memorial at its proposed site. David Cameron, Gordon Brown, Tony Blair and John Major all became prime minister with Jewish funding and Jewish media support, as did the soon-to-depart current prime minister Theresa May. It’s no coincidence that Blair, Brown, Cameron and May also presided over record levels of non-White immigration.

I think fear of Jewish retribution and hope of further reward explains their support for the Holocaust toast-rack, not “decent instinct.” They’re shabbos goyim and I hope that one day they will all go on trial for treason and promoting the murder, wounding, rape, psychological torture and impoverishment of British Whites. Like “Jewish citizens” in Britain, they have been more loyal to Israel, and to the priorities of Jews worldwide, than to the interests of their own nation.