The Winter issue of The Occidental Quarterly is out. It’s really one of the best we’ve ever put together, and, at 136 pages, certainly the longest. It contains great articles and review essays by writers well-known to readers of TOO, including Nelson Rosit, Dr. Ray Wolters, Dr. Andrew Joyce, Guillaume Durocher, F. Roger Devlin, and Dr. Tom Sunic. I also have a lengthy review of an important book on the influence of the Catholic Church on European history — part of my book project on Western origins.

Subscription information is available on the TOO website, only $60 for the print version (plus access to the electronic version), $30 for the electronic version only. It’s a great gift, perhaps especially for people who are not aware of the perspectives we highlight. We are now approaching the break-even point on costs. 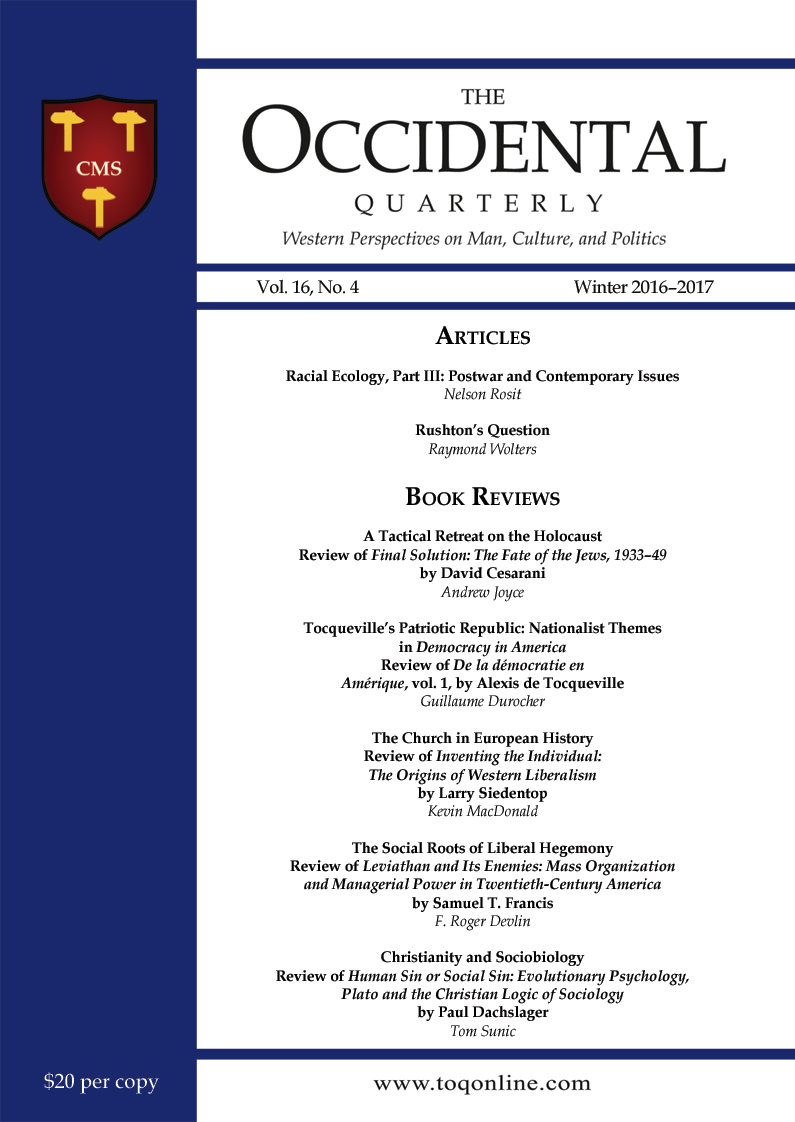 The Summer issue was loaded into subscribers’ area on TOQonline 6/16.
Print journals were mailed 6/15 and will take somewhat longer to arrive than they have in the past. 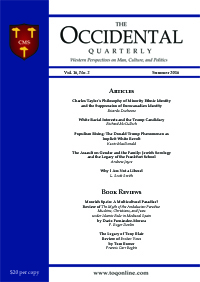 The Occidental Quarterly fills a unique niche  in bringing together scholarly articles on a wide range of topics that are mired in political correctness elsewhere.

There are quite a few reasons for the precarious state of our civilization and our people. But one of the main ones is that we have lost the intellectual and moral high ground to a cultural elite that is hostile to our people and our culture.

The domination of the mass media and the academic world by elites that are hostile to White identity and interests is a major barrier for educated Whites to act on behalf of their interests. White people cower in fear of being called a racist for believing and acting in ways that are absolutely normal and natural for all the other peoples of the world. While other peoples defend themselves, their culture and their borders, societies in Europe, North America, Australia, and New Zealand that have been controlled by Whites for hundreds of years are the only ones to accept their demise as a moral imperative. We view this outcome as the result of competition over the construction of culture in which the legitimate interests of Whites have been compromised.

All of the scientific data are on our side. Increased ethnic diversity is associated with a host of societal ills, including decreased support for social welfare programs and lack of public trust. Those who argue that Western societies have a unique moral obligation to cede cultural and political control to non-Whites completely ignore the legitimate interests of Whites. No one argues that countries like Korea or Uganda have a moral obligation to allow other peoples to swamp the native population.

You will not only find the articles fascinating and informative, you will also be supporting the work of scholars who are part of a community defending our people and our culture with the highest level of integrity and intellectual sophistication.

The (very handsome) cover for the Spring 2016 issue can be accessed by clicking here. This issue will be mailed out around March 21. 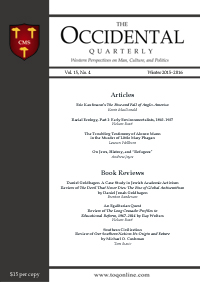 It’s Christmas time and for the great jaded American majority that means buying all kinds of junk that will probably be little appreciated and soon forgotten. But here’s an idea for the perfect gift for Christmas — a subscription to The Occidental Quarterly. The hardcopy version of the Winter 2015-2016 issue is being sent to subscribers now, and new subscribers will begin with this issue. It should get to recipients before Christmas. The electronic version will be available December 21. This issue contains articles and reviews by many of the usual suspects — Nelson Rosit, Brenton Sanderson, Andrew Joyce, Tom Sunic, and Lawrence Wellborn—and me.

We are living in very exciting times. A major political candidate is saying things that have been kept out of the mainstream for decades by a corrupt elite consensus on immigration and multiculturalism that dominates both the GOP and the Democrats. Suddenly people are waking up to the fact that a very large number of White people are furious about where the US is going.

Donald Trump’s candidacy is a game changer and has a very real possibility of success. In this new climate, millions of White people are realizing that it’s entirely legitimate to oppose immigration and multiculturalism. It’s okay to oppose the idea that every last human has the moral right to immigrate to a Western country, or that all peoples and cultures are equally acceptable as immigrants.

And it’s safe to say that millions of White people are changing what they think. The current zeitgeist depends on top-down control by hostile elites. The vast majority of people develop opinions that are in line with mainstream views, and the mainstream views, from MSNBC and the New York Times to Fox News and National Review, are completely in line with the dispossession of the traditional peoples and culture of America and the West.

It is important that TOQ become self-supporting so that it doesn’t need to be subsidized by the Charles Martel Society. Your subscription, either digital or hardcopy,  is definitely a step in the right direction. Please click on the TOQ subscription link for further information. Digital subscriptions are $30 for four issues; print versions (which include a  digital subscription) are $60 for U.S. subscribers, somewhat more for those living outside the U.S. Print subscribers have had access to digital files with their subscriptions automatically.