“You never want a serious crisis to go to waste. This crisis provides the opportunity for us to do things that you could not before.” The patriotic Israeli Rahm Emanual didn’t actually say that, but it perfectly reflects his Machiavellian character. It also describes how free speech in Britain is now going to be attacked by the shabbos shiksa Theresa May under the guidance of Moshe Kantor, the Board of Deputies, and other goyophobic Jews.

The vibrancy in London, hard on the heels of the vibrancy in Manchester, is a crisis that isn’t going to be wasted. Too many people are speaking some or all of the truth about the disastrous situation Britain now finds itself in. Our vibrant enrichers from the Third World are starting to vibrate too much and enrich too fast. After the suicide-bombing up north in Manchester, the next item on the multi-culti agenda was a “tribute concert,” as Ariana Grande and Camila-Batmanghelidjh fans Coldplay and other Judas Goats brought thousands of sheeple together for a tearful wallow in a pink-tinted, rose-scented bath of sentimentality and reality-evasion. The highlight of the night: Grande and Coldplay singing “Don’t look back in anger.” 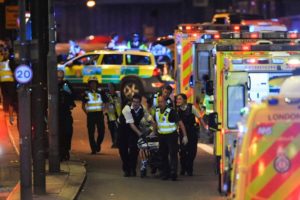 But three more vibrant enrichers rudely interrupted proceedings by slaughtering and mutilating yet more kaffir down south in London. “If the current trend in Islamic terror attacks continues, candlelit vigils will soon be the number one cause of global warming,” as an evil White racist put it on Twitter. Having got us into this fine mess, Britain’s liberal elite are now assuring us that they’re the ideal people to get us out of it. To do that, they want to silence “extremism” on the internet. The dedicated shabbos goy John Mann, chair of the British Parliamentary Committee Against Antisemitism, has tweeted thus: “I repeat, yet again, my call for the internet companies who terrorists have again used to communicate to be held legally liable for content.”

Mann isn’t acting on his own initiative. He’s the spokesgoy for Jews who want to use Muslim terrorism to go after White hate-think outlets like the Occidental Observer. Our ideological crime isn’t just to say that mass immigration and political correctness are a curse, but also to point out who laid the curse upon the West: the organized Jewish community and its liberal allies. While Israel puts up hi-tech fences to keep vibrancy out, Jewish activists in the West campaign tirelessly for open borders. 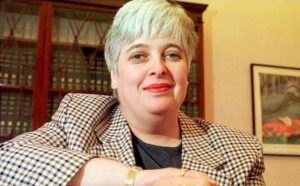 Barbara Roche: “I love the diversity of London.”

They also tirelessly promote minority worship, or the transformation of minorities like Muslims, Blacks and homosexuals into saintly icons whom the White heterosexual majority must never question or criticize. Minority worship has directly assisted the Rape Jihad waged in Rotherham, Oxford, Cologne and many other places. It also inspires the witch-hunts conducted by anti-racists and feminists to stamp out stale pale male perversions like logic and science. Liberals always prefer ego-stroking fantasy to unpleasant reality.

Lords of the Wring

You can see reality-evasion everywhere in the New Statesman, an even more narcissistic and self-righteous version of the Guardian. The magazine was lying even as it pretended to face the horrors being perpetrated in Brave New Britain. Note the repeated references to “Europe” in its hand-wringing about the Manchester vibrancy:

IS [Islamic State] has been urging its sympathisers and operatives in Europe to carry out attacks in their countries of residence. … An ever-present threat of terrorism is the new reality of our lives in Europe. … a pattern [of low-tech terrorism] we have become increasingly accustomed to in Europe … The consequences of such attacks have been seen across Europe, most notably in Nice[,] Berlin, Westminster and Stockholm. This speaks to the scale of the threat facing Britain, and Europe more generally. (See “Leader: Mourning in Manchester” and “Inside the minds of the Isis murderers”, The New Statesman, May 2017) 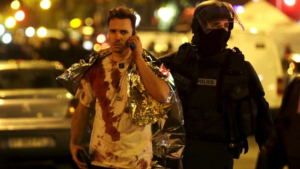 By “Europe,” the hand-wringers mean those unfortunate parts of Western Europe that have — with the New Statesman’s enthusiastic support — been enriched by mass immigration. The attacks it laments aren’t happening in great European cities like Warsaw, Budapest and Bratislava. Why not? It’s very simple: because Eastern Europe hasn’t been enriched by mass immigration, despite the best efforts of the European Union to bully patriots like the Polish prime minister Beata Szydlo and the Hungarian president Viktor Orbán into betraying their own people. 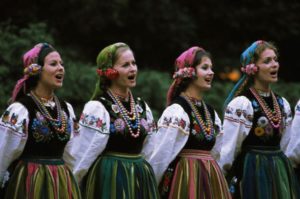 The New Statesman is also a dedicated advocate of the idea that birth on British soil magically disconnects vibrant enrichers from any link with immigration and ancestry: “the Manchester suicide attacker, Salman Ramadan Abedi, was British. … the Manchester suicide bomber, Salman Ramadan Abedi, was born and educated in Britain … [Morrissey] appeared to suggest immigration was to blame (the culprit was born in Manchester of immigrant parents, just like Morrissey).”

It’s deeply dishonest to pretend that Morrissey’s Irish ancestry is equivalent to Salman Abedi’s Libyan ancestry. Morrissey is White British and not infected with the anti-Protestant and anti-English hatred of a shabbos goy like Ted Kennedy. Abedi was an alien intruder who repaid Britain’s hospitality with mass murder. And Abedi’s back-story includes a shocking example of the “rape culture” that liberal publications like the New Statesman and Guardian claim to abhor, but happily ignore when it is practised by vibrant enrichers:

Manchester bomber was part of mob that waged campaign of intimidation against schoolgirl rape victim, 16

The Manchester bomber was part of a mob that waged a campaign of intimidation against a schoolgirl rape victim and her family, her mother believes. Salman Abedi was an associate of Bilal Ahmed, who was jailed with two others last year for taking part in the gang rape of the teenager. At his trial, members of his South Manchester community tried to intimidate the girl’s family, with youths hurling abuse and gesturing their support for the rapists. Now the victim’s mother is convinced that bomber Abedi was part of the group at court.

She said she recognised Abedi’s name as soon as it became public on Tuesday and is convinced he was part of the group that intimidated her and her husband outside court. She added: ‘They are all friends and are ending up terrorists and rapists. At the time it made me think another one could go on to commit a terrorist act and Salman clearly has.’ … (Manchester bomber was part of mob that waged campaign of intimidation against schoolgirl rape victim, 16, The Daily Mail, 27th May 2017)

The British authorities had the duty to uphold the rule of law and protect the victim and her parents by prosecuting and jailing those responsible for the intimidation. The authorities treacherously failed in that duty. The intimidators enjoyed non-White privilege and were allowed to get away with their uncouth clannish behaviour, just like the Blacks who openly threatened the jury at a public enquiry in London and the Muslims who chanted in support of a murderer in Glasgow. 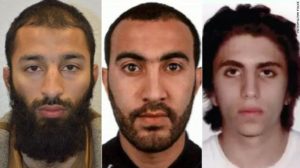 Feminists should have been horrified by that intimidation in Manchester and demanded tough action against a “community” that was not merely accepting “rape culture,” but actively practising it. Just as they did for all those decades in Rotherham, feminists turned a blind eye. Minority worship supersedes women’s rights. Similar stories may emerge about the three vibrant enrichers in London. One thing is certain: like Salman Abedi and Khalid Masood, they will have been bad for Britain long before they turned their vibrant hands to terrorism.

Now that they have done so, Donald Trump’s label applies just as much to them as it did to Salman Abedi: they were “losers.” Thanks to their low average IQ and high average criminality, Muslims and other non-Whites are not suited to life in Western nations like Britain. But losers like Abedi, Masood and the London trio found an easy way to become the centre of world-wide attention and infamy: jihad against the White kaffir. In dealing death, they found the success that had previously eluded them. The attacks in London and Manchester were epic fails for British Whites, epic triumphs for non-White failures.

And what is the reaction of the New Stateman to such vibrancy? It wrings its hands and laments the state of Brave New Britain: “Liberals may not like it, but a strong state is the precondition of any civilised social order. Certain cherished freedoms may have to be compromised. This is the new tragic narrative.”

Indeed. And it is a “tragic narrative” brought to life by liberals from a script written by Jews like Moshe Kantor. Now the shabbos shiksa Theresa May will try to stop hate-thinkers from continuing to name the guilty parties. 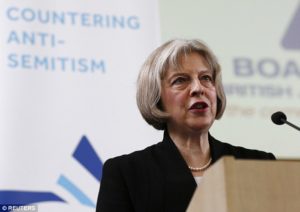 Theresa May: “Without its Jews, Britain would not be Britain”

So be it. Those who go to jail for expressing their opinions are in good company. Giordano Bruno and Aleksandr Solzhenitsyn are remembered and honoured while those who persecuted them have fallen into obloquy. I’ve never believed the saying Magna est veritas et prævalet — “Truth is mighty and it prevails.” Truth is not mighty. It often has to be fought for against liars and their dupes. As the disaster wrought by mass immigration becomes impossible to hide, those liars will re-double their efforts to silence hate-think. It’s the job of the alt-right to see that they don’t succeed.