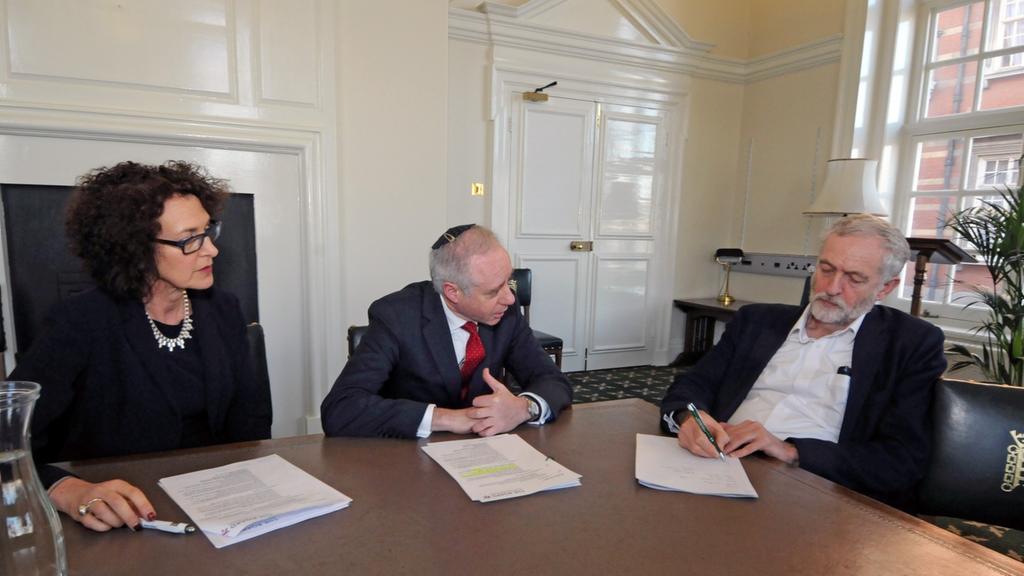 The Jewish Chronicle is at it again, promoting a toxic anti-Semitic stereotype. Previously it claimed that Jews were “outsiders” whose “paranoia” and “arrogance” brought about their own downfall. Now it’s claiming that Jews prefer to work “behind the scenes” in British politics. This is the classic stereotype of Jews as conspirators and manipulators, evading public scrutiny as they shape supposedly democratic governments to their own ends.

The Chronicle made this claim as it described how, for once, the Jewish community has decided to work in the open. British Jews want the current Labour leader Jeremy Corbyn to be a well-trained shabbos goy like Tony Blair and Theresa May, funded by Jewish money and obedient to Jewish wishes. But Corbyn isn’t a shabbos goy and their best efforts have failed to turn him into one. They couldn’t operate “behind the scenes” in Corbyn’s Labour party, so they’ve had to come out into the open:

Yesterday’s Enough Is Enough rally was the most extraordinary event of my almost ten years as editor of the JC [Jewish Chronicle]. We are not, by nature, an angry community. Nor do we take to the streets. When we have a worry, we — more often than not — talk for ever to ourselves about it and then, perhaps, try to talk behind the scenes to the powers that be.

Guiding a goy: Jeremy Corbyn and the Board of Deputies

So when, on Sunday, the Board of Deputies and the JLC [Jewish Leadership Council] proposed a rally at Parliament Square, and issued a strongly worded open letter to Jeremy Corbyn, there was an intake of breath in some quarters. Not the way we do things. Not enough people will turn up. It will backfire. No one will care.

But the naysayers were wrong. Such is the level of anger — and, one has to say, fear — in our community over the indulgence of antisemitism from the leadership of the Labour Party that over 1500 people came with 24 hours[’] notice just a few days before Pesach [Passover] to make clear their feelings. … (The JC Comment Blog No.8: the antisemites stand together. So should we, The Jewish Chronicle, 27th March 2018 /11th Nisan 5778)

There’s some interesting self-pity and self-delusion in that blog at the Jewish Chronicle. Take the idea that Jews “are not, by nature, an angry community” and that they “talk for ever” to themselves about their worries before “perhaps” trying “to talk behind the scenes to the powers that be.” This picture of Jews as mild-mannered, self-effacing and reluctant to complain does not match the reality of Jewish power and characteristically aggressive Jewish psychology. Would a non-aggressive people attempt to alter the ethnic balance of the country they live in so as to make the natives a minority? END_OF_DOCUMENT_TOKEN_TO_BE_REPLACED 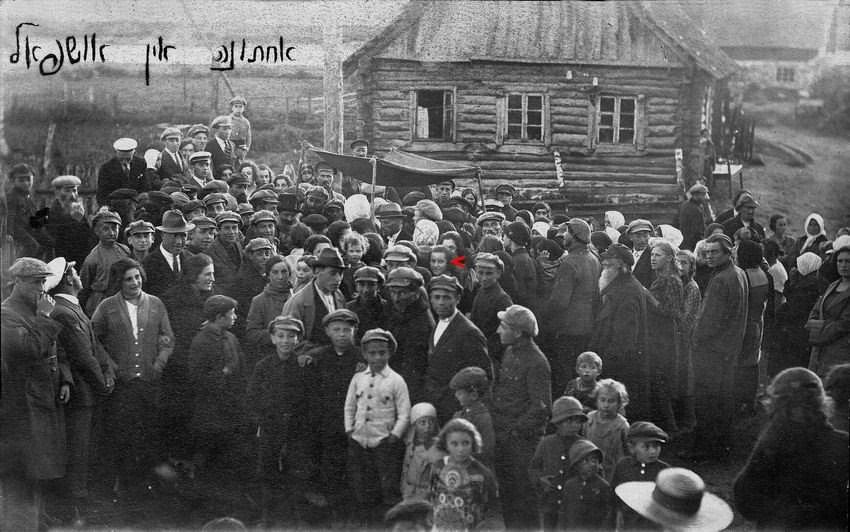 In his VDARE article of April 22, “Eastern European Jews And The Case Of the Marginalized Elite,” Paul Gottfried claims that I fail to make important distinctions among Jewish groups:

Though Kevin MacDonald argues his theory about Jewish group behavior ably, I believe it is unwarranted to generalize about the social behavior of all Jews simply because of the behavior of Eastern European Jews. …We are clearly dealing with a group that embraces all kinds of Leftist causes, most of which have a destabilizing effect on what remains of a traditional Christian society. Let me repeat: I don’t find anything about this behavior that has characterized all Jews at all times (unlike MacDonald).

This article summarizes some of my comments on different groups of Jews, some of which may have gotten a bit lost in the shuffle. In fact, beginning with my first two books on Judaism, I have repeatedly discussed differences among Jewish groups (e.g., IQ differences between Ashkenazi and Sephardic groups in chapter 7 of A People That Shall Dwell Alone). This includes the important distinction between Eastern European Jews and Western European Jews, beginning with Chapter 6 of Separation and Its Discontents (1994) on Jewish strategies to minimize anti-Semitism.

It has often been critically important for Jews to be able to present a divided front to the gentile society, especially in situations where one segment of the Jewish community has adopted policies or attitudes that provoke anti-Semitism. This has happened repeatedly in the modern world. A particularly common pattern during the period from 1880 to 1940 was for Jewish organizations representing older, more established communities in Western Europe and the United States to oppose the activities and attitudes of more recent immigrants from Eastern Europe (see note 20). The Eastern European immigrants tended to be religiously orthodox, politically radical, and sympathetic to Zionism, and they tended to conceptualize themselves in racial and national terms—all qualities that provoked anti-Semitism. In the United States and England, Jewish organizations (such as the American Jewish Committee [AJCommittee]) attempted to minimize Jewish radicalism and gentile perceptions of the radicalism and Zionism of these immigrants (e.g., Cohen 1972; Alderman 1992, 237ff). Highly publicized opposition to these activities dilutes gentile perceptions of Jewish behavior, even in situations where, as occurred in both England and America, the recent immigrants far outnumbered the established Jewish community.

This difference between the Eastern European immigrant community and the German-Jewish establishment in the US is a central theme of “Jews, Blacks, and Race” (in Samuel Francis (Ed.), Race and the American Prospect: Essays on the Racial Realities of Our Nation and Our Time [The Occidental Press, 2006]):

Anti-Jewish attitudes that had been common before [World War II) declined precipitously, and Jewish organizations assumed a much higher profile in influencing ethnic relations in the U.S., not only in the area of civil rights but also in immigration policy. Significantly this high Jewish profile was spearheaded by the American Jewish Congress and the ADL, both dominated by Jews who had immigrated from Eastern Europe between 1880 and 1920 and their descendants. As indicated below, an understanding of the special character of this Jewish population is critical to understanding Jewish influence in the United States from 1945 to the present. The German-Jewish elite that had dominated Jewish community affairs via the American Jewish Committee earlier in the century, gave way to a new leadership made up of Eastern European immigrants and their descendants. Even the AJCommittee, the bastion of the German-Jewish elite, came to be headed by John Slawson [in 1943], who had immigrated at the age of 7 from the Ukraine.

The AJCongress, a creation of the Jewish immigrant community, was headed by Will Maslow, a socialist and a Zionist. Zionism and political radicalism typified the Jewish immigrants from Eastern Europe. As an indication of the radicalism of the immigrant Jewish community, the 50,000- member Jewish Peoples Fraternal Order was an affiliate of the AJCongress and was listed as a subversive organization by the U.S. Attorney General. The JPFO was the financial and organizational “bulwark” of the Communist Party USA after World War II and also funded the Daily Worker, an organ of the [Communist Party USA], and the Morning Freiheit, a Yiddish communist newspaper. Although the AJCongress severed its ties with the JPFO and stated that communism was a threat, it was “at best a reluctant and unenthusiastic participant” in the Jewish effort to develop a public image of anti-communism—a position reflecting the sympathies of many among its predominantly second- and third-generation Eastern European immigrant membership. Concern that Jewish communists were involved in the civil rights movement centered around the activities of Stanley Levison, a key advisor to Martin Luther King, who had very close ties to the Communist Party (as well as the AJCongress) and may have been acting under communist discipline in his activities with King.

END_OF_DOCUMENT_TOKEN_TO_BE_REPLACED

Israel’s unfair treatment of Christians continues. At the end of June, Israeli Occupation Forces (IOF) arrested Greek Orthodox Bishop Atallah Hanna during his peaceful participation in a march protesting the illegal seizure and subsequent sale of Beit al-Baraka hospital, which is part of al-Baraka church, north of Hebron.

A delegation from the Presbyterian church as well as international and Israeli activists participated in the march against the sale of Beit al-Baraka, a hospital which provided medical services to Palestinians as part of al-Baraka church services. The sale is illegal under international and canonical law. …

Israeli newspaper Haaretz last month leaked details of the seizure of Beit al-Baraka hospital by a Jewish billionaire, the sale having been allegedly made through a fake Norwegian real estate company. Days after publication of this illegal seizure, the sale process halted, however Israeli Defense Minister, Moshe Ya’alon, subsequently decided that there was no legal impediment to the sale of the building.

The previous week saw one of the most serious episodes of violence in recent memory against Christians in Israel. Five teams of firefighters were necessary to put out the flames which at dawn woke up Tabgha, the area on the shores of the Sea of Galilee, in northern Israel, where Jesus fed the 5,000 with the miracle of the multiplication of the loaves and fishes (Mark 6:30–46) and where Jesus appeared for the fourth time after his resurrection following his Crucifixion (John 21:1–24). END_OF_DOCUMENT_TOKEN_TO_BE_REPLACED